“Eve” by Auguste Rodin is a smaller version of the bronze statue initially created for “Gates of Hell.” It has become one of Rodin’s best-known sculptures of the female figure. Eve stands awkwardly in trying to cover her body, she appears to be crouching, as she draws her left leg in to hide. The depiction captures the agonized moment of shame through the perception of nakedness after the fall into sin. Her left-hand makes a gesture, as if in protection against a blow.

Using clay, plaster molds, and a meticulous process that included live models, Rodin created sculptures that were innovative and realistic. With Eve, Rodin created a textured and emotive figure to mirror his statue of Adam. The sensuality of her body is in sharp contrast with the modesty of the gesture she makes by lowering her head and crossing her arms. Rodin did not complete his version of this expressive sculpture. The deliberately unfinished aspect was one of the stylistic techniques, which makes him one of the revolutionary founding father of modern sculpture. 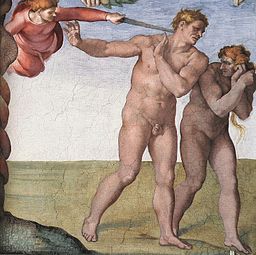 Both the Eve and Adam sculptures were initially conceived as part of a group of reliefs decorating Rodin’s monumental bronze portal “The Gates of Hell“. The Gates depicted scenes from “The Inferno” in Dante Alighieri’s book the Divine Comedy. Rodin originally planned that the Gates were to be flanked by the two colossal statues of Adam and Eve, the first sinners. The figure of Eve was one of the first life-size female figures that Rodin ever modeled.

In the first creation narrative account of Genesis, it says “male and female created them”, which has been interpreted to imply the simultaneous creation of the man and the woman. Whereas the second creation account of Genesis states that God created Eve from Adam’s rib because he was lonely. These two accounts have led to different views on how to resolve this apparent discrepancy. There are also different views of the etymology of Eve’s name. The standard view is that “Eve” in Hebrew is believed to mean “living one” or “source of life” as it is phonetically similar to “to live”.

According to Genesis, Eve succumbs to the serpent’s temptation to eat the forbidden fruit from the tree of the knowledge of good and evil. She shares the fruit with Adam, and as a result, the first humans are expelled from the Garden of Eden. Christian churches differ on how they view both Adam and Eve’s disobedience to God, and to the consequences that those actions had on the rest of humanity.

In the Islāmic tradition, Eve is known as Adam’s wife and the first woman, although she is not explicitly named in the Quran but in the Hadith.

Auguste Rodin is generally considered the father of modern sculpture; he possessed a unique ability to model a complex and deeply pocketed surface in clay. Many of his most notable sculptures were criticized during his lifetime. Rodin’s most original work departed from traditional themes of mythology and allegory, he modeled the human body with realism and with personal character and physicality. By 1900, he was a world-renowned artist and remained one of the few sculptors widely known outside the arts community.

Quotes about Adam and Eve

“Adam called his wife’s name Eve; because she was the mother of all living.”
– Genesis

“Adam knew Eve, his wife, and she conceived.”
– Bible

“Let us be thankful to Adam, our benefactor. He cut us out of the ‘blessing’ of idleness and won for us the ‘curse’ of labor.”
– Mark Twain

“So hand in hand they passed, the loveliest pair that ever since in love’s embraces met – Adam, the goodliest man of men since born his sons; the fairest of her daughters Eve.”
– John Milton, Paradise Lost

“After all these years, I see that I was mistaken about Eve in the beginning; it is better to live outside the Garden with her than inside it without her.”
– Mark Twain

“Adam and Eve, according to the fable, wore the bower before other clothes. Man wanted a home, a place of warmth, or comfort, first of physical warmth, then the warmth of the affections.”
Henry David Thoreau,

“Whoever has lived long enough to find out what life is, knows how deep a debt of gratitude we owe to Adam, the first great benefactor of our race. He brought death into the world.”
– Mark Twain