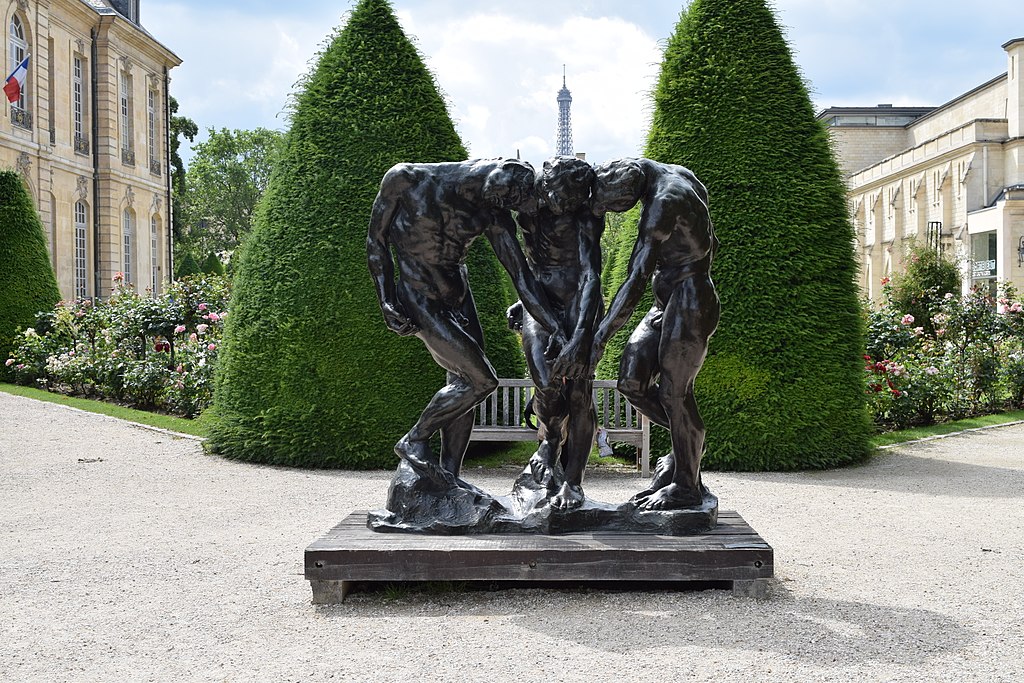 The plaster sculpture was later cast in bronze in several editions, with such casts now exhibited at:

In Dante’s Divine Comedy, The Shades, are the souls of the damned, that stand at the entrance to Hell. They point to an inscription:

In the Inferno, Dante describes three shades, souls of his departed countrymen, who danced in a circle as they told of their woeful state in Hades.

Rodin placed them on top of “The Gates of Hell” from where they could gaze down at the spectator. The Shades stood above the center of the lintel and personified the dead.

As in his sculpture of Adam,  with his twisting and tormented pose, Rodin was influenced by Michelangelo. The shades are a variation of the Adam pose.

Through this anatomical distortion technique, Rodin achieved an expressive force quite unparalleled during his era.

When discussing his creation, Rodin said that he studied Dante for a whole year, trying to depict the eight circles of the inferno.

Finally, he began to work from nature and to depict the hell that is found in man’s mind. The project occupied  37 years of his life, adding, arranging, and removing pieces.

There are over 180 figures in the Gates. At the top, there are figures of “The Thinker” and “The Three Shades.”

Using clay, plaster molds, and a process that included live models, Rodin created sculptures that were innovative in their realism.

The Three Shades by Auguste Rodin – Legion of Honor

The bronzes made before Rodin’s death in 1917 generally were patinated almost black and flecked with green.

Auguste Rodin – The Gates of Hell