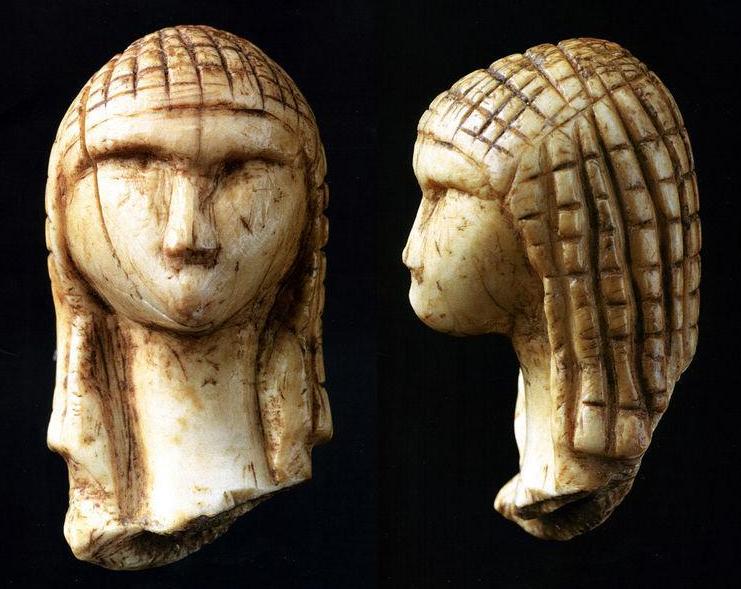 The Venus of Brassempouy is an ivory figurine created about 25,000 years ago and is one of the earliest known realistic representations of a female human face.

She was carved from mammoth ivory, and her face is triangular and serene. The forehead, nose, and brows are carved in relief, but the mouth is absent, suggesting the work of the sculptor may have been interrupted.

The representation of hair is a checkerboard-like pattern formed by two series of shallow incisions at right angles to each other. This checkerboard-like feature has also been interpreted as a hood with geometric decoration.

She was discovered in Brassempouy, which is a small village in southwest France. Two caves near the village, 100 meters from each other, were among the first Paleolithic sites to be explored in France.

The Venus of Brassempouy was discovered in one of the caves in 1894, together with eight other human figures in fragments.

These finds may represent unfinished works as if the artist or artists were carving several figurines at the same time. They represent some of the earliest works of prehistoric art.

The Venus of Brassempouy was discovered early in the science and understanding of Archaeology, and unfortunately, its Archaeological context has now been lost and can not be studied scientifically.

Today, scholars agree that the Venus of Brassempouy belonged to an Upper Palaeolithic culture of 29,000–22,000 BP (Before Present).

It is more or less contemporary with the other Palaeolithic Venus figurines, such as those of Lespugue, Dolní Věstonice, Willendorf.

However, the Venus of Brassempouy is distinguished by its more realistic representation of the face.

The original cultural meaning and purpose of these ancient carvings are not known. It is believed that they may have served a ritual or symbolic function.

Unfortunately, ivory is highly susceptible to damage from temperature change, moisture, and light, and thus, the figure is viewable only by reservation.

A vertical crack on the right side of the face is due to the internal aging of the ivory.

A Venus figurine is the term used to group any Upper Paleolithic statuette portraying a woman or figures of uncertain sex.

These figurines were carved from soft stone, bone or ivory, or formed of clay and fired. In total, some 144 such figurines are known, virtually all of modest size, between 3 cm and 40 cm or more in height.

Most of them have small heads, wide hips, and legs that taper to a point. Various figurines exaggerate the abdomen, hips, breasts, thighs, or vulva, although many do not.

In contrast, arms and feet are often absent, and the head is usually small and faceless. Depictions of hairstyles can be detailed, and clothing or tattoos may be indicated.

Venus was central to many religious festivals and was revered in Roman religion under numerous cult titles.

The Romans adapted the myths and iconography of her Greek counterpart Aphrodite for Roman art and Latin literature.

In the later classical tradition of the West, Venus became one of the most widely referenced deities of Greco-Roman mythology as the embodiment of love and sexuality.

“Venus, thy eternal sway
All the race of men obey.”
– Euripides