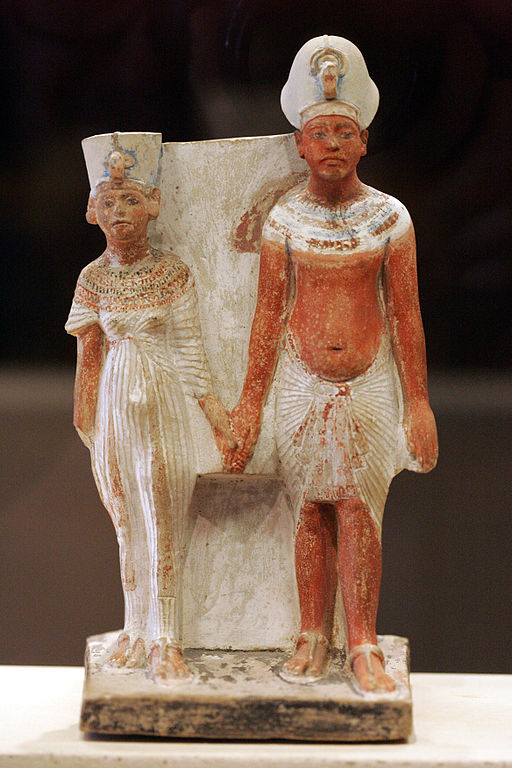 This statuette of Akhenaten and Nefertiti made of limestone and paint show the king and queen hand in hand walking forward together. They stand staring straight ahead, looking very serious.

They are clothed in fine, close-pleated linen and wear colored collars on their shoulders and upper chests. As an official portrait, the king wears the Blue Crown, and the queen has a tall flat-topped headdress.

Easily portable, this statuette would probably have been used in a house shrine for private worship. A family would use it to pay homage to the royal couple, the sole living, earthly manifestation of the inaccessible God.

This statuette, from about 1345 BC, showing an Egyptian royal couple holding hand, is rare in Egyptian art up to this time but becomes more common from the Old Kingdom on.

This depiction is part of the artistic conventions of the Amarna style. The male and female bodies are of similar size, the neck is stretched forward and the head raised.

The typical anatomical distortions of the Amarna style are present, such as the round shoulders, the short upper torso, the slightly swollen belly, evident hips and thighs, and the slender arms and legs.

“May the Sun live, ruler of the horizon,
who rejoices on the horizon as the illumination that comes from the Aten-disk,
may he live forever;
the King of Upper and Lower Egypt, Neferkheperure-Waenre, may he live.”

The hieroglyphs behind the queen, the name of the god, given in the same way, is followed by: “The great royal wife Neferneferwaten-Nefertiti, living forever.”

Neferneferuaten Nefertiti (c. 1370 – c. 1330 BC) was an Egyptian queen and the Great Royal Wife of Akhenaten, an Egyptian Pharaoh.

Nefertiti and her husband were known for a religious revolution, in which they worshipped one god only, Aten, or the sun disc.

With her husband, she reigned during the wealthiest period of Ancient Egyptian history. Some scholars believe that Nefertiti ruled briefly as Neferneferuaten after her husband’s death and before the accession of Tutankhamun.

Akhenaten (known before as Amenhotep IV) was an ancient Egyptian pharaoh who ruled for 17 years (1351–1334 BC).

He is noted for abandoning traditional Egyptian polytheism and introducing worship centered on the Aten.

He was one of the first to practice monotheism, the belief in just one god. Akhenaten tried to shift his culture from Egypt’s traditional religion, but the shifts were not widely accepted.

After his death, his monuments were dismantled and hidden. His statues were destroyed. His name excluded from the king lists.

Traditional religious practice was gradually restored, and Akhenaten was nearly lost from history.

However, the discovery during the 19th century of his ancient capital Akhetaten brought him back into our history. Akhenaten was the city he built and designed for the worship of Aten, at Amarna.

Modern interest in Akhenaten and his queen Nefertiti comes partly from his connection to Tutankhamun, who was his son.

Tutankhamun’s mother was not Nefertiti, but a woman named by archaeologists as “The Younger Lady.”

Tutankhamun (1341 – 1323 BC) was an Egyptian pharaoh who, since the discovery of his intact tomb, has been referred to colloquially as King Tut.

The 1922 discovery of Tutankhamun’s nearly intact tomb sparked a renewed interest in ancient Egypt, for which Tutankhamun’s mask, now in the Egyptian Museum, remains the famous symbol.

In 2010, the results of DNA tests confirmed that he was the son of the mummy found in the tomb KV55, believed by some to be Akhenaten.

The deaths of some of the people involved in the discovery of Tutankhamun’s mummy have been popularly attributed to the curse of the pharaohs.

The Amarna style is a style adopted in the Amarna Period during and just after the reign of Akhenaten.

Whereas Ancient Egyptian art was slow to alter, the Amarna style was a significant and sudden break from its predecessor, which was restored after Akhenaten’s death.

It is characterized by a sense of movement and energy in images, with figures having raised heads, many overlapping figures and scenes busy and crowded.

The human body is portrayed differently; figures are slender, swaying, with exaggerated extremities. Depictions of Akhenaten give him distinctly feminine qualities such as large hips, stomach, and thighs.

Fingers and toes are depicted as long and slender and are carefully detailed to show nails.

Artists also showed subjects with elongated facial structures and with a more elongated body than the previous representation.

In the new human form, the figures had more fat in the stomach, thigh, and breast region, while the torso, arm, and legs were thin and long like the rest of the body.

Akhenaten moved the royal capital to the city, now known as Amarna, and erected several palaces and temples there.

After his death, conservative forces led by the temple priests abandoned the new capital, and traces of his monuments elsewhere defaced.

Akhenaton And Nefertiti: The Royal of Egypt

Virtual Tour of the Louvre