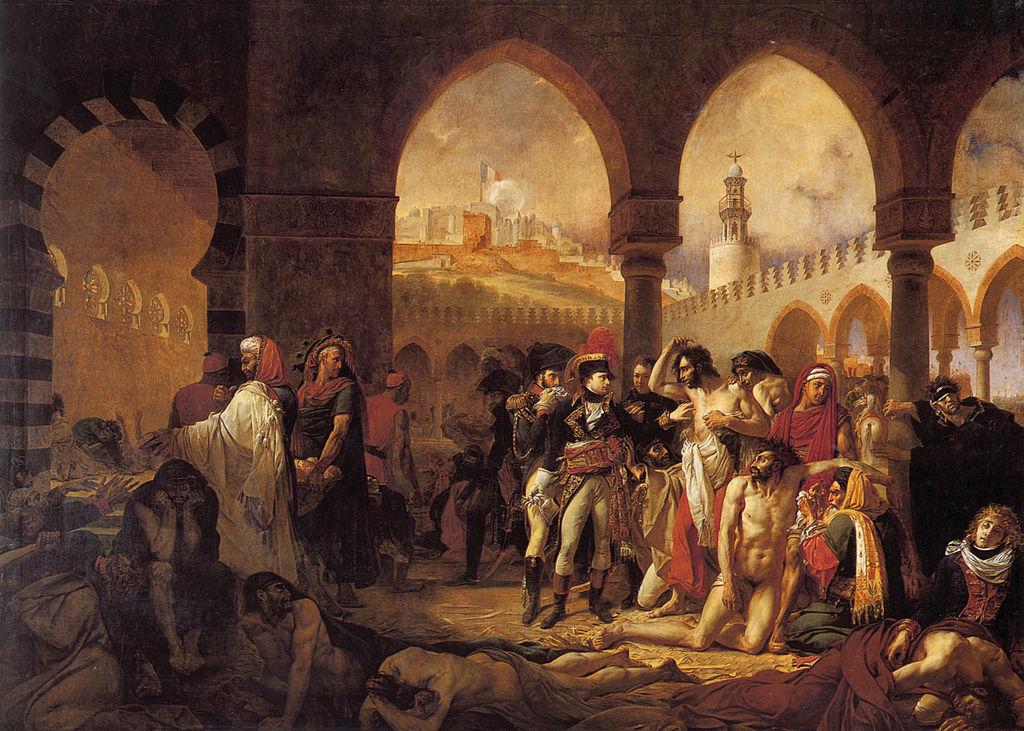 “Bonaparte Visiting the Plague Victims of Jaffa” by Antoine-Jean Gros

“Bonaparte Visiting the Plague Victims of Jaffa” by Antoine-Jean Gros was commissioned by Napoleon Bonaparte to portray a historical event during his Egyptian Campaign.

The scene shows Napoleon in Jaffa on 11 March 1799, visiting his sick soldiers at the Armenian Saint Nicholas Monastery.

The commission of this painting was a propaganda attempt to embroider Bonaparte’s mythology and quell reports that Napoleon had ordered fifty plague victims in Jaffa to be given fatal doses of opium during his retreat from his Syrian expedition.

The scene is set in the Armenian Saint Nicholas Monastery, whose courtyard can be seen in the background. Further into the background are the walls of Jaffa, with a breached tower above which flies an oversized French flag. The smoke from the fire dominates the town.

In the center under two arcades, Napoleon, accompanied by his officers, is touching the symptoms of the bubonic plague. The symptoms occurred as painful swellings in the thighs, neck, groin, or armpits.

Touching the inflammation was considered to be either magnificent or suicidal, according to one’s point of view on the Napoleonic legend or of the terrors of the age of plagues.

The light and color in the picture all highlight Bonaparte’s gesture in the best possible light.

In 1804, there was no question that this action would have been a daring deed by Bonaparte. As demonstrated by the officer behind Napoleon, who tries to stop him from touching the bubo.

How bubonic plague spread was still unknown at the time, and one of the officers is holding a handkerchief over his mouth and nose.

In front of Napolean, an Arab doctor is caring for another sick man, while a blind man struggles to approach the general. Prostrate and extended men occupy the bottom of the painting.

The arcade opens out on a gallery full of the sick. Beneath an Egyptian horseshoe arch on the left is a richly dressed oriental man who is handing out bread, aided by a servant carrying a bread-basket.

The capture and violent sack of Jaffa by the French army were followed by an outbreak of bubonic plague, which decimated the army.

The Napoleonic army requested the help of the priests from the Armenian monastery, who provided medicine that was able to cure some soldiers. Napoleon personally thanked the Armenian patriarch and gifted him with his tent and sword.

The sick man with bandaged eyes on the right has blindness as well as plague. Since the army’s arrival in Egypt, many French had suffered severe eye problems due to the sand, dust, and extreme light of the sun.

Medical efforts to stop the plague were unchanged since the Middle Ages. An old doctor is incising the bubos to let the pus flow out. He has already operated on a bubo under the raised right arm of his patient, who holds a bloodied compress under his arm, and is wiping his blade ready to incise a second bubo. The doctor’s assistant supports the patient during the operation.

Amongst the bodies are the sick, languishing, and the hero appears less heroic for being surrounded by ordinary people. This suffering in painted form, was a novelty as previously, only noble deaths were portrayed.

This painting was made in the year Napoleon becoming emperor, thus evoked the tradition of the thaumaturgical royal touch, which the French kings carried out with sufferers of scrofula.

The Siege of Jaffa was a military engagement between the French army under Napoleon Bonaparte and Ottoman forces.

In 1799, the French laid siege to the city of Jaffa, which was under Ottoman control. The French forces managed to capture the city in about five days of fighting.

After successfully subduing Egypt, Napoleon Bonaparte was continuing his push on the Ottoman territories in the Middle East.

High walls and extensive fortifications surrounded the city of Jaffa. Napoleon had to win Jaffa before he could advance any further.

The city was one of Greater Syria’s main mercantile centers and had a harbor that could provide vital shelter for his fleet.

However, a plague epidemic caused by poor hygiene decimated the local population and the French army alike.

On the eve of the retreat from Syria-Palestine, Napoleon suggested to his army doctors that the seriously ill troops who could not be evacuated should be given a fatal dose of laudanum. Still, they forced him to give up the idea.

Overcome in the north of the country by the Ottomans, Napoleon abandoned Palestine. After Napoleon’s retreat and a new nine-month siege, Jaffa was again taken over by Napoleon’s former opponent.

The royal touch was a form of laying on of hands, whereby French and English monarchs touched their subjects, regardless of social classes, with the intent to cure them of various diseases.

The thaumaturgic touch was most commonly applied to people suffering from tuberculous cervical lymphadenitis. This disease was better known as scrofula or the King’s Evil.

The disease rarely resulted in death and often went into remission on its own, giving the impression that the monarch’s touch cured it.

The claimed power was most notably exercised by monarchs who sought to demonstrate the legitimacy of their reign and their newly founded dynasties.

Antoine-Jean Gros (1771 – 1835) was a French painter whose work was in the genres of history and neoclassical painting.

Gros studied under Jacques-Louis David in Paris and began his artistic career during the French Revolution.

Forced to leave France, he moved to Genoa and witnessed the nearby Battle of Arcole (1796).

Inspired, he produced a portrait of the French commander, Napoleon Bonaparte, then a newly promoted general.

The portrait brought Gros to public attention and gained the patronage of Napoleon.

He traveled with Napoleon’s army for several years and later produced several large paintings of battles and other events in Napoleon’s life.

After the fall of Napoleon, he shifted his artistic focus and produced more history paintings, which art historians regard as less impressive than his earlier work.

A Virtual Tour of the Paintings in the Louvre

“A leader is a dealer in hope.”
– Napoleon Bonaparte