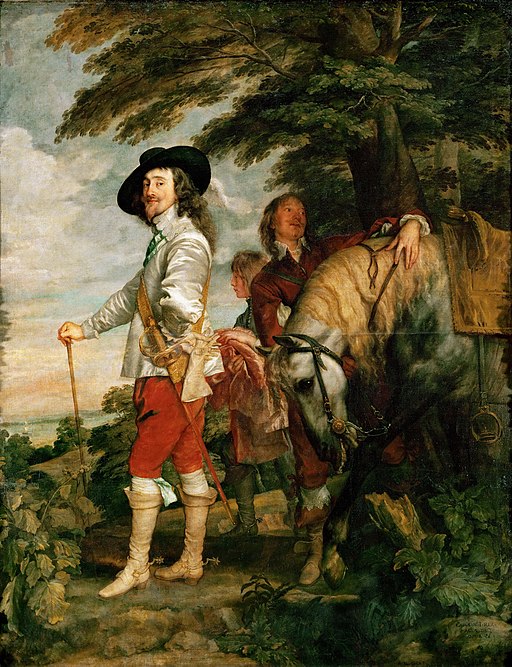 “Charles I at the Hunt” by Anthony van Dyck

“Charles I at the Hunt” by Anthony van Dyck depicts Charles dressed as an aristocratic gentleman, but with regal assurance, standing next to a horse as if resting on a hunt. Charles stands as if surveying his domain with his head turned to face the viewer with a slight smile. The king was sensitive about his height, and Van Dyck compensates by placing the viewer at a low angle point of view, looking up at the king. Charles is portraited in a wide-brimmed Cavalier hat, teardrop earring, shimmering silver satin doublet, red breeches, and turned-down leather boots. He is girt with a sword and has one hand resting on a walking stick, while his other hand rests on his hip, holding his gloves as a sign of his assurance. The horse is bowing its head in submission to the king.

On a rock, in the lower right corner, the Latin inscription declares his rights as a king; “Carolus.I.REX Magnae Britanniae”. Translating to “Charles I, King of Great Britain,” which was a political statement. His father James had united the crowns of Scotland and England and proclaimed himself King of Great Britain. However, the Acts of Union, which legally created the Kingdom of Great Britain, took another 70 years after this portrait.

At the time of this portrait, Van Dyck had already made two other equestrian portraits of Charles. One in armor as a chivalrous knight and the Equestrian Portrait of Charles I depicting Charles as a heroic philosopher king, surveying his domain.

Charles I of England

Charles I (1600 – 1649) was monarch from 1625, and soon after his succession, Charles quarreled with the Parliament of England, which sought to curb his royal prerogative. Charles believed in the divine right of kings and thought he could govern according to his conscience. Many of his subjects opposed his policies, which led to the English Civil War.

After his defeat in 1645, Charles refused to accept his captors’ demands for a constitutional monarchy and was tried, convicted, and executed for high treason in 1649. The monarchy was abolished, and a republic called the Commonwealth of England was declared. The monarchy was later restored to Charles’s son, Charles II, in 1660.

Sir Anthony van Dyck (1599 – 1641) was a Flemish artist who became the leading court painter in England after success in the Southern Netherlands and Italy. Van Dyck started painting from an early age. He gained early success as a painter, becoming a master in the Antwerp guild in 1618. He worked in the studio of Peter Paul Rubens, who became a significant influence on his work.

Van Dyck worked in London for some months in 1621, then returned to Flanders for a brief time, before traveling to Italy, where he stayed until 1627. He spent five years after his return from Italy in Flanders, and from 1630 was the court painter for Archduchess Isabella, Habsburg Governor of Flanders. In 1632 he returned to London to be the principal court painter at the request of Charles I of England.

He is best known for his portraits of European aristocracy, most notably Charles I and his family and associates. He also painted mythological and biblical subjects, including altarpieces, and was an important innovator in watercolor and etching. Charles I granted him a knighthood, and he was buried in St Paul’s Cathedral.

Charles I at the Hunt

Insights into Charles I at the Hunt” by Anthony van Dyck

Do some politicians also suffer from a false belief in their divine right?https://t.co/UHqSK5i8DG

“Democracy is the power of equal votes for unequal minds.”
– Charles I of England