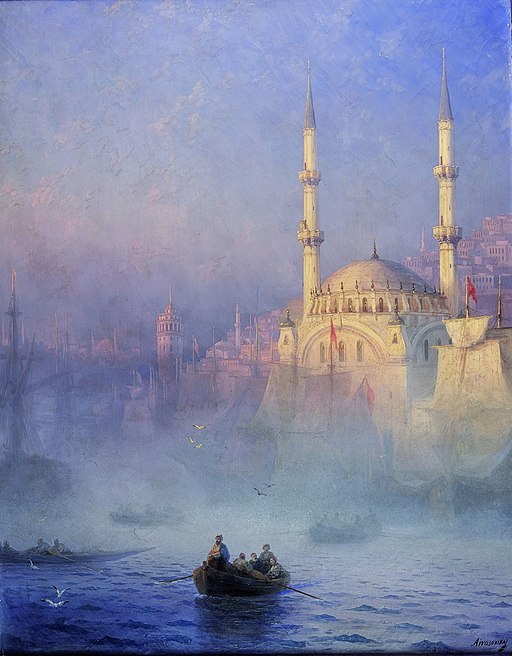 “Constantinople, Top-Kahné Mosque” by Ivan Aivazovsky depicts a mosque rising out of the mist and the waters of the Bosphorus in what is today Istanbul. The white Mosque featuring two minarets is lit by twilight and shines like a lighthouse to help the ships navigate the fog. The Tophane (Top-Kahné) quarter has a coastline with the Bosphorus. In the Ottoman era, it was the city’s oldest industrial zone.

The painting features the Nusretiye Mosque, which is an ornate mosque located in the Tophane (Top-Kahné) district of Beyoğlu, Istanbul, Turkey. While Islamic elements influence its architecture, it retains a Baroque style, making it unique to the city. It was built in 1823-1826 by Sultan Mahmut II. The architect was Kirkor Balyan, the founder of a large family of Armenian architects.

The Mosque was completed in 1826 by the Balyan family, a prominent Ottoman Armenian family of court architects in the service of Ottoman sultans during the 18th and 19th centuries. For five generations, they designed and constructed numerous significant buildings in the Ottoman Empire, including palaces, mansions, mosques, and various public buildings, mostly in Constantinople, present-day Istanbul.

The name of the place Tophane (Top-Kahné) was derived from the armory known as Tophane-i Amire, which was built in the reign (1451–1481) of the Ottoman Sultan Mehmed II. Its primary purpose was the manufacturing cannons and cannonballs. In 1823, during the Firuz Agha fire, the barracks were burned. They were later rebuilt, and during the reconstruction effort, the Nusretiye Mosque was constructed. 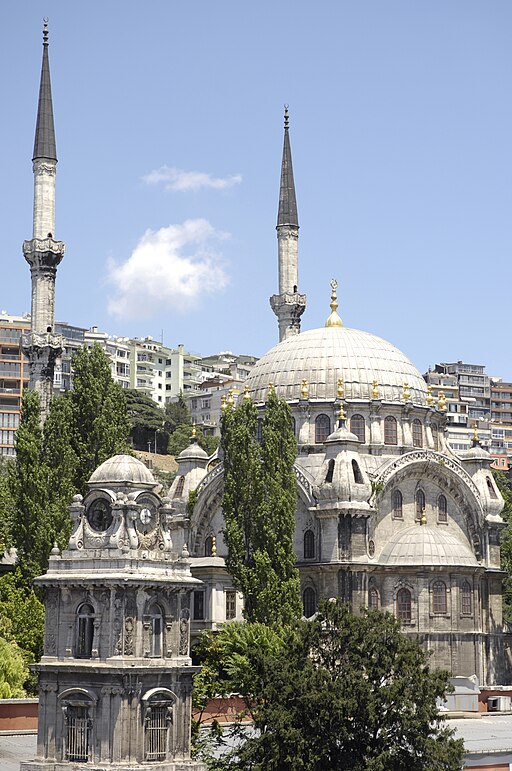 The Mosque features two Minarets, which are a type of tower typically built adjacent to mosques. Minarets serve multiple purposes. While they provide a visual focal point, they are generally used for the Muslim call to prayer. They are usually a tall spire with a conical or onion-shaped crown. The number of minarets by mosques is not fixed; initially, one tower would accompany each Mosque, then the builders could construct several more.

The earliest mosques lacked minarets, and the call to prayer was often performed from smaller tower structures. The origins of minarets are traced by scholars back to the Umayyad Caliphate. The first minarets may have been derived architecturally from the Syrian church tower. The towers in Syria may have originated from ziggurats of Babylonian and Assyrian shrines of Mesopotamia. The oldest minaret is the Great Mosque of Kairouan in Tunisia, dated to 836.

Ivan Konstantinovich Aivazovsky (1817 – 1900) was a Russian painter who is considered one of the greatest masters of marine art. Baptized as Hovhannes Aivazian, he was born into an Armenian family in the Black Sea port of Feodosia in Crimea and was mostly based there.

Following his education in Saint Petersburg, Aivazovsky traveled to Europe and returned to Russia to be appointed the principal painter of the Russian Navy. Aivazovsky had close ties with the military and political elite of the Russian Empire and often attended military maneuvers. The saying:

was popularized by Anton Chekhov, and used in Russia for describing something lovely.

The vast majority of his works are seascapes, but he often depicted battle scenes, Armenian themes, and portraiture. Most of Aivazovsky’s works are kept in Russian, Ukrainian and Armenian museums as well as private collections.