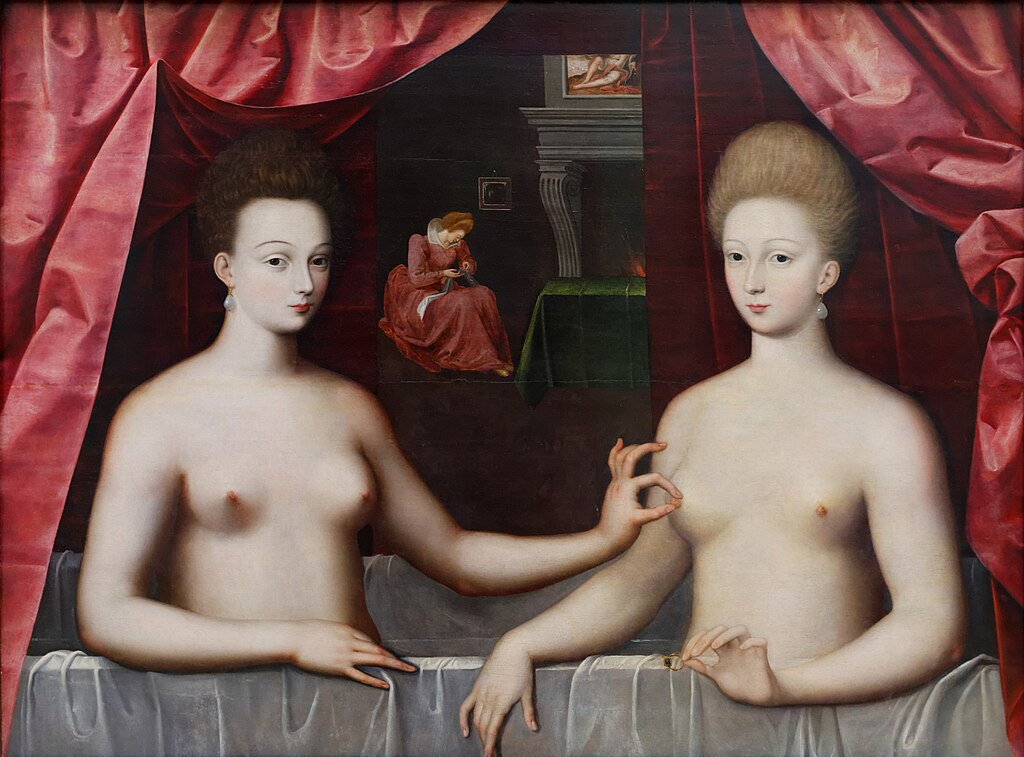 Gabrielle d’Estrées and One of Her Sisters

Gabrielle is standing up nude in her bath, holding Henry’s coronation ring, while her sister stands nude beside her and pinches her right nipple.

The coiffed hair and pearl earrings of the two women indicate that they are women of high-class position, and strongly contrast with their nudity.

In the background, in the top right corner of the curtain, a painting peeks out from behind, displaying a pair of naked male legs. It has been suggested that the legs are symbolic of the King in this relationship.

Also in the background is a seated, modestly-dressed woman. She is sewing in front of a fire that can be glimpsed in the hearth.

The nipple-pinching gesture is often interpreted as a symbolic announcement that Gabrielle is pregnant with Henry’s child, César de Bourbon. The Louvre states:

“The oddly affectionate way in which the sister is pinching Gabrielle d’Estrées’ right breast has often been taken as symbolizing the latter’s pregnancy with the illegitimate child of Henry IV. This interpretation would seem to be confirmed by the scene of the young woman sewing – perhaps preparing a layette for the coming child – in the background.”

In the twentieth and twenty-first centuries, this painting has been used to represent female homosexuality.

Gabrielle d’Estrées, Duchess of Beaufort and Verneuil, Marchioness of Monceaux (1573 – 1599) was a mistress, confidante, and adviser of Henry IV of France.

She persuaded Henry to renounce Protestantism in favor of Catholicism in 1593. Later she urged French Catholics to accept the Edict of Nantes, which granted certain rights to the Protestants.

Gabrielle became Henry’s most important diplomat, using her female friends amongst the various Catholic League families to bring about peace.

In March 1596, Henry gave both Gabrielle and his sister Catherine a set of gold keys, which bestowed upon them seats on his council. This gift pleased Gabrielle so much that she took to wearing the little keys on a chain around her neck.

It was legally impossible for the king to marry her because he was already married to Margaret of Valois. Still, he acknowledged Gabrielle as the mother of three of his children, and as “the subject most worthy of our friendship.”

The ring that Gabrielle holds is said to be Henry’s coronation ring, which he supposedly gave to her as a token of his love shortly before she died.

The King was grief-stricken at her death, especially given the widely held rumor that Gabrielle had been poisoned. He wore black in mourning, something no previous French monarch had done.

He gave her the funeral of a queen; her coffin was transported amidst a procession of princes, princesses, and nobles to the Saint-Germain-l’Auxerrois church in Paris, for a requiem mass. 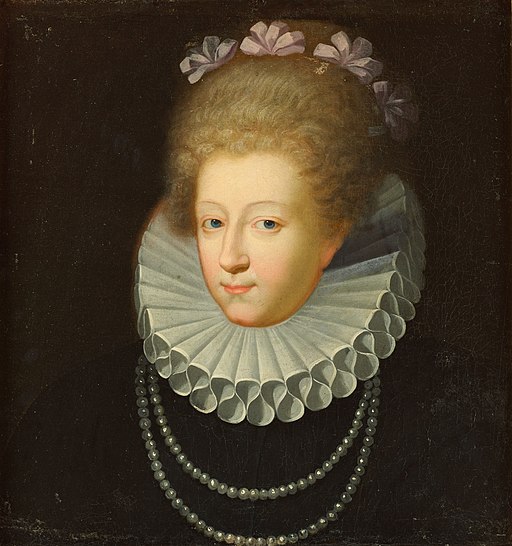 “Portrait of Gabrielle d’Estrees and her sister the Duchess of Villars” was painted by an unknown artist in about 1594. The painter is thought to be part of the Fontainebleau School.

This painting is one of many works by artists of the School of Fontainebleau, by a select number of artists.

The School of Fontainbleau (c.1530 – c.1610) refers to two periods of artistic production in France during the late Renaissance centered on the Royal Palace of Fontainebleau.

It is in the style of the second school of Fontainebleau and shows the influence of Italian Renaissance art in the sensual contours of the bodies of the two young women.

The composition also has influences from Flemish art, such as the intimacy of the background scene.

The style of the School of Fontainebleau would continue to influence artists through the first decades of the 17th century.

Then other artistic currents such as Rubens, Caravaggio, the Dutch, and Flemish naturalist schools soon eclipse them.

Gabrielle d’Estrées and One of Her Sisters

A Virtual Tour of the Louvre – Paintings

“If I had a flower for every time thought of you… I could walk through my garden forever.”
– Alfred Tennyson