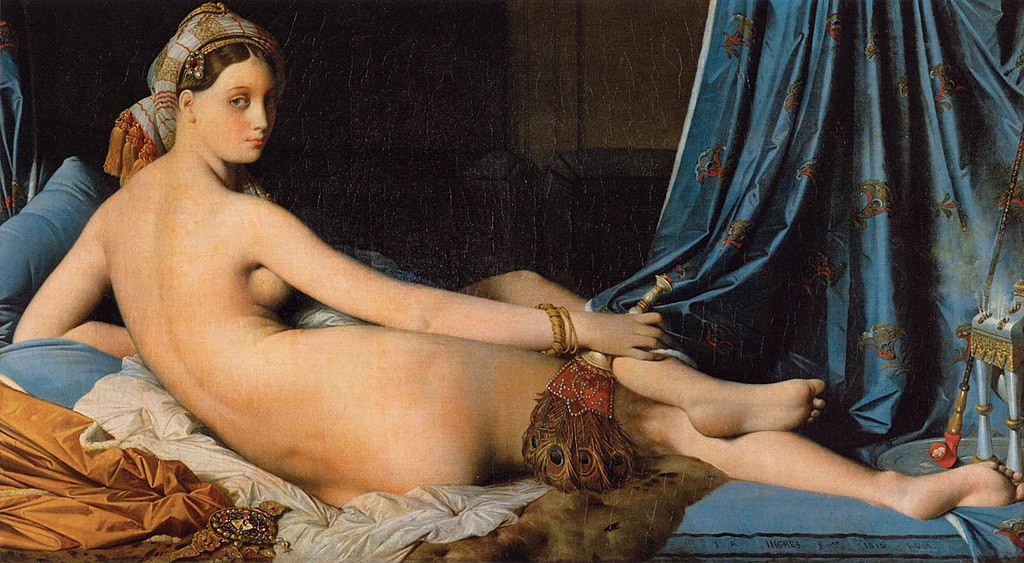 “Grande Odalisque” by Jean-Auguste-Dominique Ingres depicts an odalisque. An odalisque was a chambermaid in the sequestered living quarters used by wives and concubines in the Ottoman sultan’s household.

Grande Odalisque attracted extensive criticism when it was first exhibited. It became renowned for the elongated proportions and departure from the restrictions of anatomical realism.

This work signified Ingres’ break from Neoclassicism and shifted towards exotic Romanticism. Ingres favored long lines to convey curvature and sensuality and the very skillful use of light and shadow to sculpture proportions.

Ingres portrays the Odalisque in a pose viewed from the back with a small head, elongated limbs. This technique reveals influences from Mannerists such as Parmigianino, who was famous for anatomical distortion.

Ingres was a French Neoclassical painter who thought of himself as a painter of history and highly regarded for his many portraits.

Critics often found his style bizarre and archaic. However, his expressive distortions of form and space make him an important precursor of modern art,  and his work influenced Picasso and Matisse, and other modernists.

A Tour of the Louvre Paintings

“Is there anyone among the great men who have not imitated? Nothing is made with nothing.”

“Make copies, young man, many copies. You can only become a good artist by copying the masters.”

“You have to observe flowers to find the right tones for the folds of clothes.”

“Is there anyone among the great men who have not imitated? Nothing is made with nothing.”
– Jean-Auguste-Dominique Ingres