The “Law Code of Hammurabi” is a Stele that was erected by the King of Babylon in the 18th century B.C. It is a work of art, it is history, and it is literature. It is a complete law code from Antiquity that pre-dates Biblical laws.

A stele is a vertical stone monument or marker inscribed with text or with relief carving. This particular example, which is nearly 4,000 years old, looks like the shape of a huge index finger with a nail and imperfect symmetry.

The Code of Hammurabi is a well-preserved law code of ancient Mesopotamia and has been found on many stele and clay tablets from the period.

The Law is set out in graded punishments. For example, the Law: “An eye for an eye, a tooth for a tooth,” depends on social status, of slave versus free man.

Other laws are related to military service or the penalties for a judge who issues incorrect decisions. Examples include:

The code is inscribed in the Akkadian language, using cuneiform script carved into the stele. The Script can be found in the front and the back.

The stele was found at the site of Susa, in modern-day Iran. Historians believe that it was brought to Susa in the 12th century B.C. by an Elamite ruler who conquered Babylon and then who erased a portion of the text in preparation for creating his inscriptions.

The sculpted scene at the top of the stele represents the King with his hand raised in front of his mouth. This gesture is a traditional gesture of devotion, worshipping the sun-god.

Note the flames are bursting forth from his shoulders of the sun-god, Shamash. The sun-god is presenting the King with the symbols of kingship. 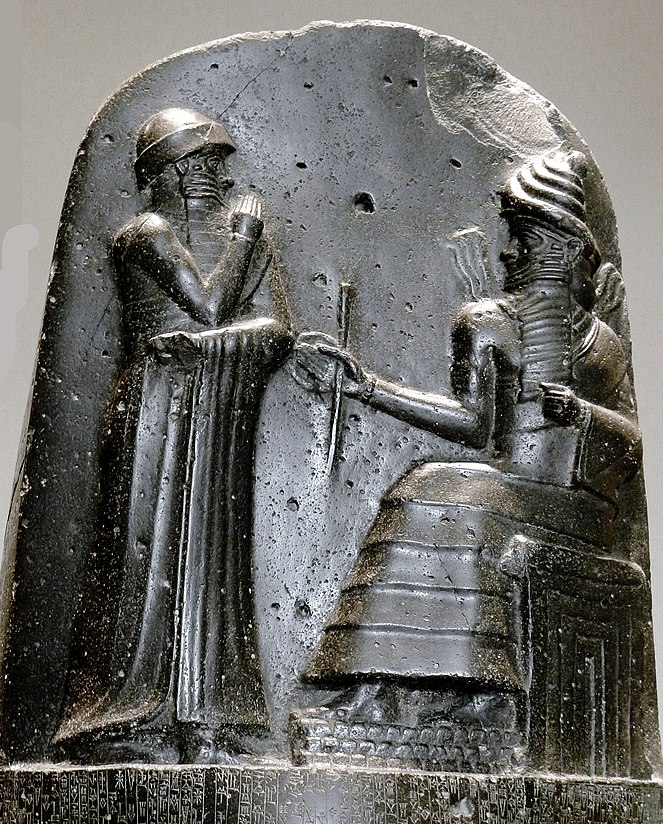 Some scholars had suggested that Moses, when he wrote the Laws of Israel, nearly a century and a half later, borrowed or was influenced by the Code of Hammurabi, which symbolized the Mesopotamian civilization.

Some of the laws, such as the Law of retaliation, ‘An eye for an eye,’ is similar to the principles set out by Moses.

A fundamental difference is that the Ten Commandments highlighted the worship of God, where the Code of Hammurabi is specifically interested in secular issues and in glorifying the King and serving his political interests.

“The first duty of government is to protect the powerless from the powerful.”

“If a man destroys the eye of another man, they shall destroy his eye.”

If a man has knocked out the teeth of a man of the same rank, his own teeth shall be knocked out.

“If a builder builds a house for someone, and does not construct it properly, and the house which he built fall in and kill its owner, then that builder shall be put to death.”

“Then Anu and Bel called by name me, Hammurabi, the exalted prince, who feared God, to bring about the rule of righteousness in the land, to destroy the wicked and the evil-doers; so that the strong should not harm the weak”

“So that I should rule over the black-headed people and enlighten the land, to further the well-being of mankind.”

“When Marduk sent me to rule over men, to give the protection of right to the land, I did right and righteousness in . . . , and brought about the well-being of the oppressed.”

“To bring about the rule of righteousness in the land so that the strong shall not harm the weak.”

“I am old, so give me your peace. Wisdom comes with age.”

“Mesopotamia will be one together as city-states we cannot create a full out war over anything, this will be settled”

“If a physician heals the broken bone or diseased soft part of a man, the patient shall pay the physician five shekels in money.”

“If a builder builds a house and the house falls and kills someone in the house the owners may kill the builder.”

“If anyone ensnares another, putting a ban upon him, but he can not prove it, then he that ensnared him shall be put to death.”

“If anyone brings an accusation of any crime before the elders, and does not prove what he has charged, he shall, if it is a capital offense charged, be put to death.”

“If he satisfies the elders to impose a fine of grain or money, he shall receive the fine that the action produces.”

“If a judge try a case, reach a decision, and present his judgment in writing; if later error shall appear in his decision, and it be through his own fault, then he shall pay twelve times the fine set by him in the case, and he shall be publicly removed from the judge’s bench, and never again shall he sit there to render judgment.”

“If anyone buy from the son or the slave of another man, without witnesses or a contract, silver or gold, a male or female slave, an ox or a sheep, an ass or anything, or if he take it in charge, he is considered a thief and shall be put to death.

“If the purchaser does not bring the merchant and the witnesses before whom he bought the article, but its owner brings witnesses who identify it, then the buyer is the thief and shall be put to death, and the owner receives the lost article.”

“If the owner does not bring witnesses to identify the lost article, he is an evil-doer, he has damaged their reputation and shall be put to death.

“If the witnesses are not at hand, then shall the judge set a limit, at the expiration of six months. If his witnesses have not appeared within the six months, he is an evil-doer and shall bear the fine of the pending case.”

“If anyone steals the minor son of another, he shall be put to death.”

“If anyone owes a debt for a loan, and a storm prostrates the grain, or the harvest fails, or the grain does not grow for lack of water; in that year he need not give his creditor any grain, he washes his debt-tablet in water and pays no rent for this year.”

“If he does not plant the field that was given over to him as a garden, if it bearable land, the gardener shall pay the owner the produce of the field for the years that he let it lie fallow, according to the product of neighboring fields, put the field in arable condition and return it to its owner.”

“If a son strikes his father, his hands shall be hewn off.”

“If he breaks another man’s bone, his bone shall be broken.”

“If a man knocks out the teeth of his equal, his teeth shall be knocked out. (A tooth for a tooth.)”

“If he knocks out the teeth of a freedman, he shall pay one-third of a gold mina.”

“If anyone strikes the body of a man higher in rank than he, he shall receive sixty blows with an ox-whip in public.”

“If a freedman strikes the body of another freed man, he shall pay ten shekels in money.”

If during a quarrel one man strikes another and wound him, then he shall swear, “I did not injure him wittingly,” and pay the physicians.”

“If the man dies of his wound, he shall swear similarly, and if he (the deceased) was a free-born man, he shall pay half a mina in money.”

“If a man strikes a free-born woman so that she loses her unborn child, he shall pay ten shekels for her loss.”

Explore the Masterpieces of the Louvre

The Code of Hammurabi & the Rule of Law: Why Written Law Matters

The Code of Hammurabi – The Full Text

The Code of Hammurabi