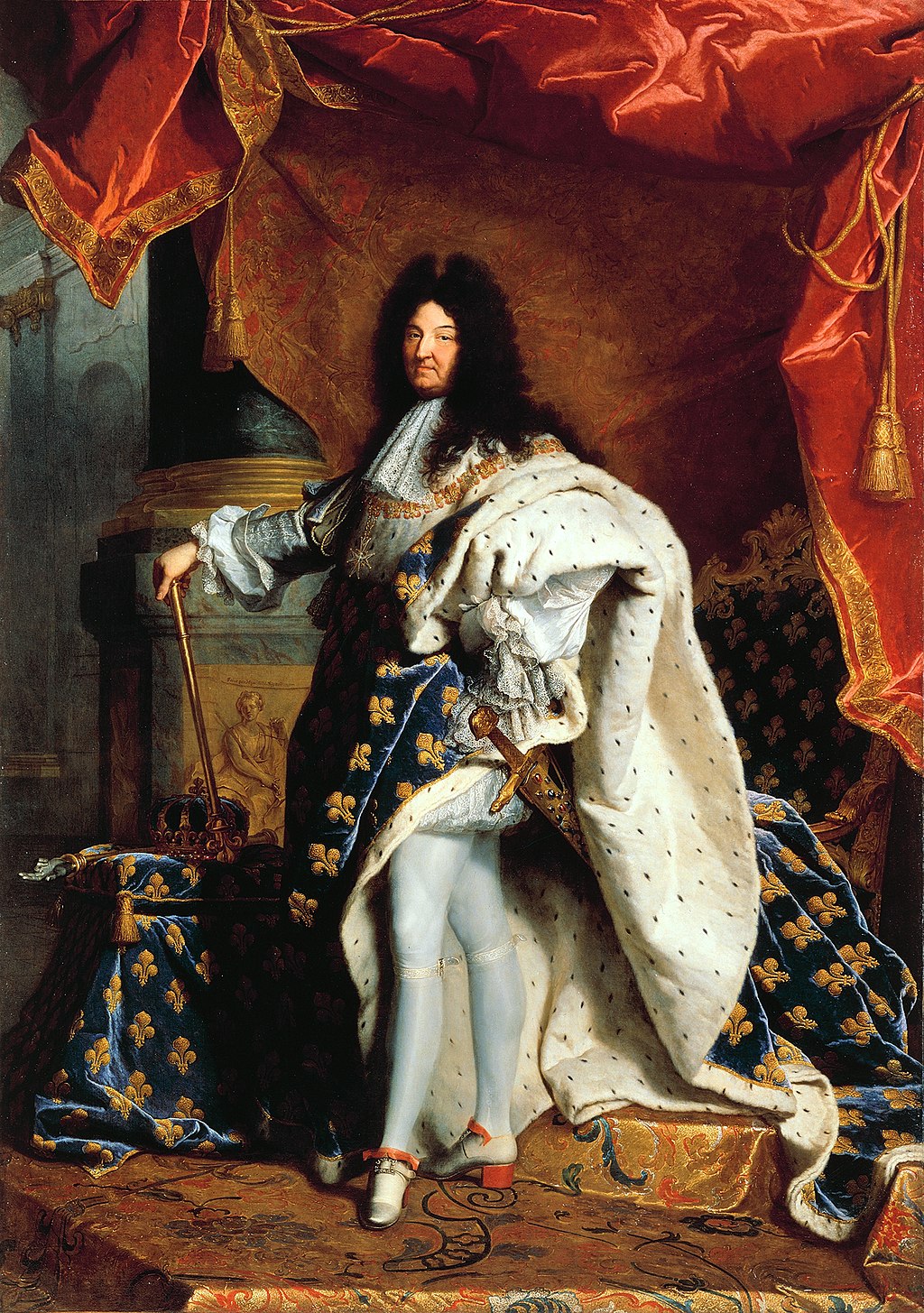 “Louis XIV of France” by Hyacinthe Rigaud is a large portrait of the 63-year-old French King in his Coronation Robes. Louis XIV kept it hanging at Versailles, and it became the “official portrait” of Louis XIV.

This portrait established the standard and formula for future state portraits. Rigaud signed and dated this painting with the words “Painted by Hyacinthe Rigaud in 1701” on the column just above the goddess of Justice.

The king occupies the central space of the painting, whose composition consists of a column, the king, and the throne. The drama of the scene is accentuated by a heavy silk draped curtain.

The large marble pillar is an evocation of power that unites earthly and heavenly powers. The throne is upholstered in blue and embroidered with fleur-de-lys, which was a religious, political and dynastic, symbol in French heraldry.

The king embodies the majesty of choice because he does not bear his regalia. His crown sits on a stool covered with a blue fleur-de-lys drapery. The scepter of his grandfather is held upside down as a cane.

The sword of Charlemagne is visible. Wearing this sword with the coronation mantle is a statement of confidence and power.

King Louis XIV is clothed in a wig and his court garments. He wears a lace shirt, cuffs and he wears the necklace of the Order the Holy Spirit and the royal coat pinned high on the shoulder.

The red-heeled shoes adorned with diamond buckles, and silk stockings held by garters are used to highlight and feature the former dancer’s thin legs, which pleased the king.

His reign started at the age of 4 years old and lasted over 72 years is the longest recorded of any monarch in European history. In the period of Absolute monarchy in Europe, Louis XIV’s France was a leader in the growing centralization of power.

Sun King was a name that King Louis XIV received because he chose the sun as his personal symbol. Also, because of his power, he was compared to Apollo, the Greek god of the sun.

Louis XIV was a staunch adherent of the divine right of kings. He advocated the divine origin of monarchical rule. Louis, however, sought to eliminate the remnants of feudalism persisting in parts of France.

He succeeded by compelling members of the nobility to inhabit his lavish Palace of Versailles and, in the process, succeeded in pacifying the aristocracy.

By these means, he became one of the most potent French monarchs and consolidated a system of absolute monarchical rule in France that endured until the French Revolution.

During Louis’ reign, France was the leading European power, and it fought three major wars and two minor conflicts. Warfare defined Louis’ foreign policy, and he used warfare as his ideal way to enhance his glory.

In peacetime, Louis concentrated on preparing for the next war. He taught his diplomats that their job was to create tactical and strategic advantages for the French military.

Under his rule, the rights to Huguenots were also abolished. Effectively forcing Huguenots to emigrate or convert, which managed to eliminate the Protestant minority from France.

Hyacinthe Rigaud (1659 – 1743) was a French baroque painter most famous for his portraits of Louis XIV and other members of the French nobility.

His instinct for dramatic poses and grand presentations suited the tastes of the royal personages, ambassadors, clerics, courtiers, and financiers who sat for him.

Rigaud owes his celebrity and success to the support he received from the four generations of Bourbons whose portraits he painted.

The core of his clientele was from among the wealthiest circles and included the bourgeois, financiers, nobles, industrialists, and government ministers.

Major ambassadors of his time and several European monarchs all sought out his services. His body of work is a complete portrait gallery of the powerful in France from 1680 to 1740. Rigaud’s works today can be found in the world’s major museums.

Louis XIV – King of France & Known as the Sun King

“It is legal because I wish it.”

“Ah, if I were not king, I should lose my temper.”

“Every time I appoint someone to a vacant position, I make a hundred unhappy and one ungrateful.”

“First feelings are always the most natural.”

“There is little that can withstand a man who can conquer himself.”

“Has God forgotten all I have done for Him.”

“Every time I bestow a vacant office, I make a hundred discontented persons and one ingrate.”

“I could sooner reconcile all Europe than two women.”

“Only small minds want always to be right.”

“There is little that can withstand a man who can conquer himself.”
– Louis XIV of France