“Psyche Revived by Cupid’s Kiss” by Antonio Canova shows the mythological lovers at a moment of high emotion. It represents the God Cupid in the height of love and tenderness, immediately after awakening Psyche with a kiss.

The detached draping around Psyche’s lower body, emphasizes the difference between the texture of skin and drapery. Beautiful curls and lines define the hair, and the feathery details create the realistic wings of Cupid.

The rough stone texture provides the basis of the rock upon which the composition is placed.

“Psyche Revived by Cupid’s Kiss” was first commissioned to Canova in 1787 by a British art collector and politician. This first version of the sculpture eventually became part of the Louvre Museum in Paris, France.

In 1796, a Russian nobleman acquired the 2nd version from Canova in Rome, and it later entered the Hermitage Museum in Saint Petersburg.

The story of Cupid and Psyche appears in Greek art as early as the 4th century BC. Still, the most extended source of the tale is the Latin novel Metamorphoses, also known as The Golden Ass, by Apuleius (2nd century AD).

The story’s theme concerns the overcoming of obstacles to the love between Psyche (“Soul” or “Breath of Life”) and Cupid, and their last union in marriage.

Psyche’s story includes the theme of dangerous curiosity, punishments and tests, and redemption through divine favor.

The back story is that the fame of Psyche’s beauty threatened to eclipse that of Venus herself. So the love goddess sent Cupid to work her revenge.

Cupid, however, becomes enamored with Psyche and rescues her by hiding her in his palace. He visits her by night, warning her not to try to look upon him.

Psyche’s envious sisters convince her that her lover must be a hideous monster, and she finally uses a lamp in their chamber to see him.

Startled by his beauty, she drips hot oil from the lamp and wakes him. He then abandons her because she broke her bond. 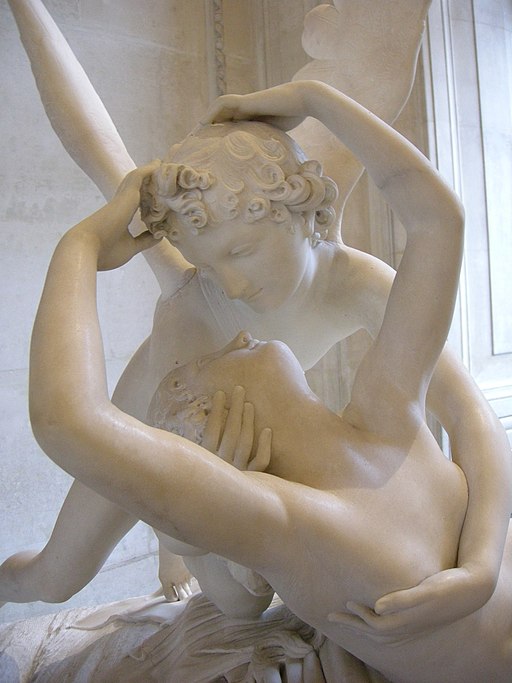 Psyche then is trapped wandering the earth looking for him, and in desperation, submits to the service of Venus. The goddess sends Psyche on a series of quests.

Each time she despairs, and each time she is given divine aid. On her last task, she is required to retrieve a dose of Proserpina’s beauty from the underworld.

She succeeds, but on the way back, she can’t resist opening the box in the hope of benefitting from it herself, after which she falls into a lifeless sleep.

Cupid finds her in this lifeless state and revives her by returning the sleep into the box. “Psyche Revived by Cupid’s Kiss” is the climax of the story, after which Cupid grants Psyche immortality so they can be wed as equals.

Thus Psyche became the goddess of the soul and the wife of Eros or the Roman equivalent Cupid, the God of love. 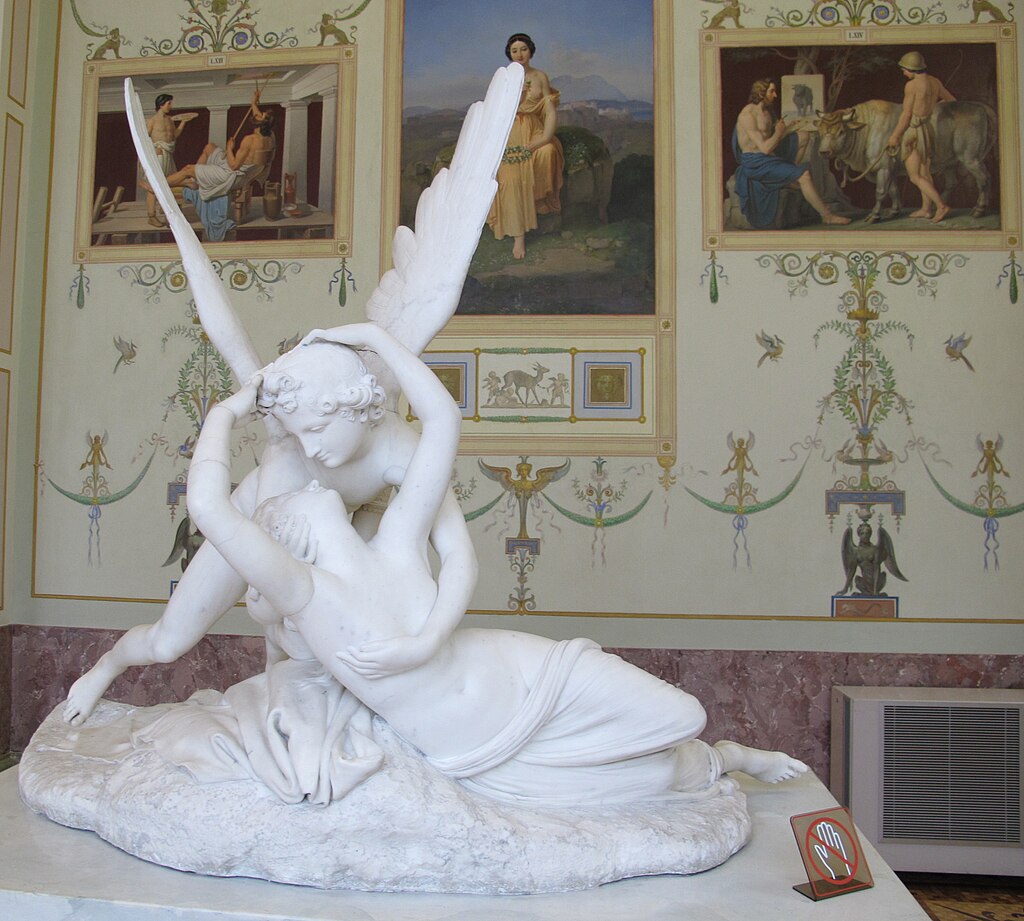 Cupid is the main character in the tale of Cupid and Psyche when wounded by his weapons, and he experiences the ordeal of love.

Although other extended stories are not told about him, his tradition is rich in poetic themes and visual scenarios, such as “Love conquers all” and the retaliatory punishment or torture of Cupid.

Eros, the Ancient Greek God of love, gave his name to only one type of love for the Greeks. The Ancient Greek language distinguished at least six different types of love, each with a different word to explain the various kinds of love.

The six distinct words for love were: philía, éros, agápe, storgē, pragma, and philautia. It is difficult to distinguish the separate meanings of these words without carefully considering the context in which the terms are used.

All these six types of love are generally seen as human and healthy forms of love. Still, at the extreme, they can also be destructive of the individual and society, as warned by the many examples in Ancient Greek Mythology and Philosophy.

In psychology, the Psyche is the totality of the human mind, conscious and unconscious. Psychology is the scientific study of the Psyche.

The word has a long history of use in psychology and philosophy, dating back to ancient times, and represents one of the fundamental concepts for understanding human nature. The word soul is sometimes used synonymously, especially in older texts.

The underlying meaning of the Greek word Psyche was “life” in the sense of “breath”, formed from the verb “to blow”. Derived meanings included “spirit” and “self.”

The association of “spirit” and “breath” is not unique to Greek cultures. The Chinese character for “spirit”, “soul” is the merging of the characters that are commonly used as “clouds” but also as “breath.”

The linkages between “spirit” and “breath” were formed independently by ancient people who did not have any contact with one another.

The idea of the Psyche is central to the philosophy of Plato. In his Phaedo, Plato has Socrates give four arguments for the immortality of the soul and life after death following the separation of the soul from the body.

Plato’s Socrates also states that after death, the Psyche is better able to achieve wisdom and experience the Platonic forms since it is unhindered by the body.

The story of Cupid and Psyche is about overcoming the obstacles to the love between Psyche (“Soul” or “Breath of Life”) and Cupid (“Desire” or “Eros”) and their ultimate union in a sacred marriage.

Psyche appears in Greek art as early as the 4th century BC.

Antonio Canova (1757 – 1822) was an Italian Neoclassical sculptor, famous for his marble sculptures. Canova was regarded as one of the greatest of the Neoclassical artists; the Baroque and the Classical Revival inspired his artwork. C

anova’s passion in sculptures were either Heroic compositions, compositions of Grace, or Tomb monuments. Canova was a highly recognized successful sculptor, and his skill and talent are evident in his work of “Psyche Revived by Cupid’s Kiss.”

Antonio Canova was born in the Venetian Republic. His father was a stonecutter, died when Canova was three years old.

Fortunately, he was put into the care of his paternal grandfather, who was a stonemason and a sculptor who specialized in altars with statues and low reliefs. His grandfather led Antonio into the art of sculpting.

At the age of nine, Antonio Canova executed two small shrines of Carrara marble, which are still in existence. After these works, he was employed under his grandfather as a sculptor.

A Virtual Tour of the Louvre