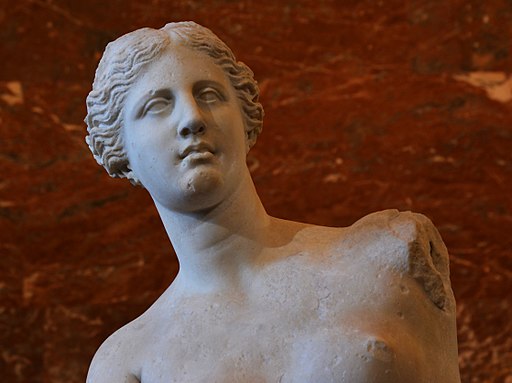 “Aphrodite of Milos,” better known as the “Venus de Milo,” is an ancient Greek statue over 2,000 years old, named after the Greek island of Milos, where it was discovered.

It is one of the most famous works of ancient Greek sculpture and depicts Aphrodite, the Greek goddess of love and beauty. The Roman name for Aphrodite is Venus, and this was the description used during the early publicity of this Greek masterpiece, and the name stuck.

This Ancient Greek masterpiece is the classical depiction of the female form and a beautiful representation of the human body.

Mythological tradition claims that Aphrodite was born naked in the seafoam off the coast of a Greek island. Hellenistic sculptors leaped at this tradition to experiment with sculpting the nude female form.

The Venus de Milo is the best-known example with its spiral composition and the fall of the drapery over the hips. The Greeks saw nakedness as, literally, a heroic state. 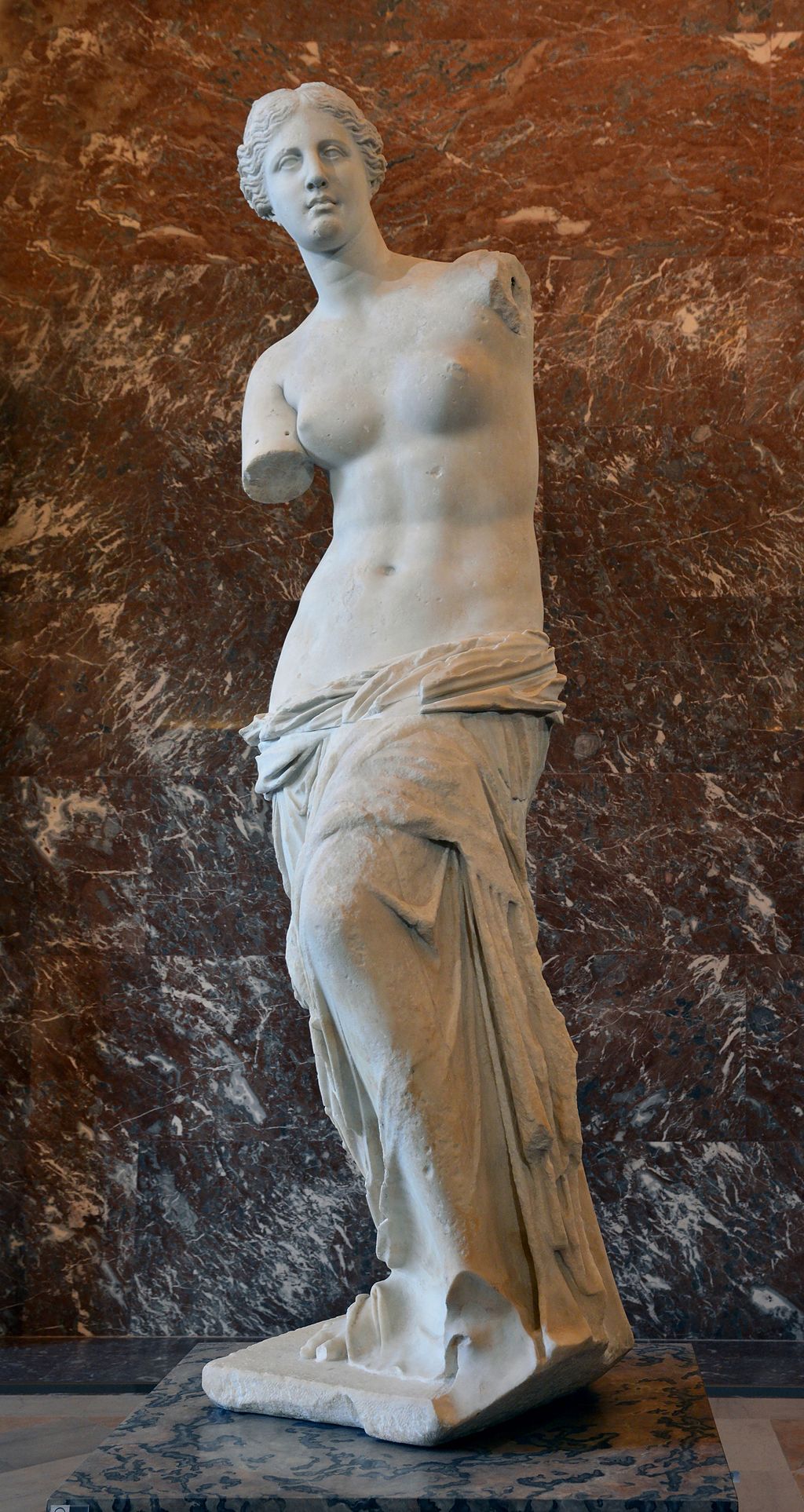 Aphrodite is the ancient Greek goddess of love, beauty, pleasure, and procreation. She is identified with the planet Venus, which is the name of the Roman goddess Venus.

The Romans called their equivalent of the Greek goddesses, Aphrodite, Venus. The cult of Aphrodite was derived mainly from that of the Phoenician goddess Astarte, who was acquired from the East Semitic goddess Ishtar of Sumeria.

In Homer’s Iliad, along with Athena and Hera, Aphrodite was one of the three goddesses whose feud resulted in the Trojan War, and she plays a significant role throughout the Iliad.

Aphrodite has been featured in much of western art as a symbol of female beauty and has appeared in numerous works of western literature.

The Aphrodite of Milos was discovered in 1820 by a peasant within the ancient city ruins of Milos, on the Greek island of Milos in the Aegean, which was then a part of the Ottoman Empire.

The statue was found in two large pieces along with fragments of the upper left arm and left hand holding an apple, and an inscribed plinth.

A French naval officer who was exploring the island learned about this mysterious statue discovery and recognized its significance. The French officers quickly arranged for its purchase by the French ambassador to Turkey.

It arrived in France in 1821 and was presented to Louis XVIII, who donated it to the Louvre Museum, where it can be seen today.

There have long have been claims that the Venus de Milo’s missing limbs were broken off in 1820 during a fight on the shore of Melos, as French and Turkish sailors vied for possession of the artwork. Or were the sculpture’s arms already missing when it was found? 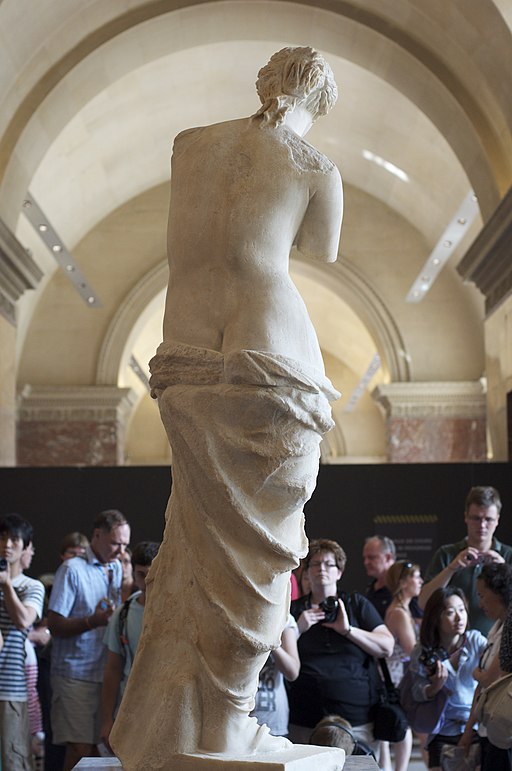 The fame of the Venus de Milo increased during the nineteenth century as the result of a significant propaganda effort by the French authorities, who promoted the Venus de Milo as a superior classical sculpture to the Medici Venus.

This debate was precipitated in 1815 when France was forced to return the Medici Venus to the Italians after Napoleon Bonaparte had looted it and taken it to France.

The Medici Venus was regarded as one of the most beautiful classical sculptures in existence, which encouraged the French to promote the Venus de Milo as a more significant treasure than that which they recently had to surrender to the Italians.

Milos, like many of the Aegean Islands, was influenced and invaded by the successive wave of civilizations and dominant powers that swept the Cycladic Islands.

Milos has been invaded or dominated by the following cultures or nations in succession, Minoan, Mycenaean, Dorian, Athenian, Spartan, Macedonian, Roman, Byzantium, Crusader, Venetians, Ottomans, Russians and then eventually part of the modern Greek state.

“Be bold: Venus herself aids the stout-hearted.”
– Tibullus

“I will imagine you, Venus, tonight and pray, pray, pray to your star like a Heathen.”
– John Keats

“Venus, thy eternal sway
All the race of men obey.
Euripides, Iphigenia in Aulis.
He is not a lover who does not love forever.”
– Euripides

“Adding sound to movies would be like putting lipstick on the Venus de Milo.”
– Mary Pickford

“Races and religions may have changed, but the marketplace, the living quarters, pilgrimage sites, places of worship, have remained the same. Venus is replaced by the Virgin, but the same life goes on.”
– Pablo Picasso

“The force that unites the elements to become all things is Love, also called Aphrodite; Love brings together dissimilar elements into a unity, to become a composite thing. Love is the same force that human beings find at work in themselves whenever they feel joy, love, and peace. Strife, on the other hand, is the force responsible for the dissolution of the one back into its many, the four elements of which it was composed.”
– Empedocles

“Aphrodite is about lust and gluttony – the only two sins worth committing, in my opinion.”
– Isabel Allende

“The individual disappeared, the features were obliterated, whether young or senile, beautiful or ugly – those were mere unimportant variations. Behind each woman rises the austere, sacred, and mysterious face of Aphrodite.”
– Nikos Kazantzakis

The conspiracy behind this famous statue

Venus de Milo and the Intersection of Beauty and Politics