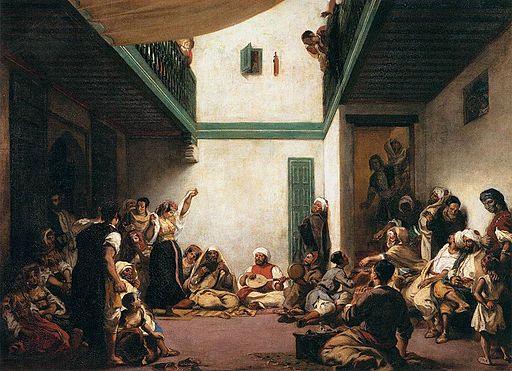 “Jewish Wedding in Morocco” by Eugène Delacroix depicts a scene the artist had experienced as part of a diplomatic mission to Morocco in the 1830s. This composition was based on his memories, details that were written down in his books on Morocco. This painting depicts the celebration after the formal wedding ceremony. Dancing is a significant feature of Jewish weddings as it is customary for the guests to dance and entertain the couple. The musicians are at the center of the composition. Women are generally on one side of the room and the men in the main on the other side of the room. The women are starting the dance.

The people and the costumes entranced Delacroix, and his trip to North Africa inform the subject matter of a great many of his future paintings. He managed to sketch some women secretly, but generally, he encountered difficulty in finding Muslim women to pose for him because of Muslim rules requiring that women be covered. Less problematic was the painting of Jewish women in North Africa, as in this example.

In 1832, Delacroix traveled to Spain and North Africa in the company of a diplomat, as part of a diplomatic mission to Morocco shortly after the French conquered Algeria. He went to escape from the urban life of Paris, in hopes of seeing other cultures. He produced over 100 paintings and drawings of scenes based on his experience of the people of North Africa. With his art, Delacroix added to growing interest in Orientalism.

Delacroix believed that the North Africans, in their attire and their attitudes, provided a visual equivalent to the people of Classical Rome and Greece. He noted:

“The Greeks and Romans are here at my door, in the Arabs who wrap themselves in a white blanket and look like Cato or Brutus…”

Delacroix made many sketches of the people and the city, subjects to which he would return until the end of his life.

The Jews of Morocco

Moroccan Jews constitute an ancient community. Before the founding of Israel in 1948, there were about 250,000 to 350,000 Jews in the country, which gave Morocco the largest Jewish community in the Muslim world. Jews in Morocco were the first in the country to adopt the French language. Unlike the general population, French remains the primary language of members of the Jewish community there.

The Jewish presence dates back over 2,500 years to the time of the Carthaginian state. Later, under the dominion of the Romans and the Vandals, Moroccan Jews increased in number and prospered. As the Roman state adopted Christianity, the church Councils of Carthage adopted policies that discriminated against Judaism. At the time of the great Arab conquests in northwestern Africa, there were many Jews who remained in the area.

The 19th century brought emancipation to the Jews of many countries but failed to alter the status of Moroccan Jews fundamentally. Then the European economic penetration brought prosperity to many Jewish merchants in northern Moroccan ports but cost many Jews in the interior their traditional livelihoods, as industrial imports from Europe drove traditional Jewish crafts out of the market. As a result, many impoverished Jews migrated to overpopulated urban Jewish quarters, where they struggled to survive as shopkeepers, peddlers, artisans, or beggars.

About ten years after Delacroix’s visit, the war with France in 1844 brought further ill-treatment upon the Moroccan Jews from the local non-Jewish community. When war with Spain broke out in 1859, the houses of Jewish families were plundered, and many had to flee.

While wedding ceremonies vary based on local customs and traditions, standard features of a Jewish wedding include a marriage contract which is signed by two witnesses, a wedding canopy, a ring given to the bride under the canopy, and the breaking of a glass.

This painting depicts the celebration after the formal wedding ceremony.

” Every heart sings a song, incomplete until another heart whispers back. Those who wish to sing always find a song.”
– Plato