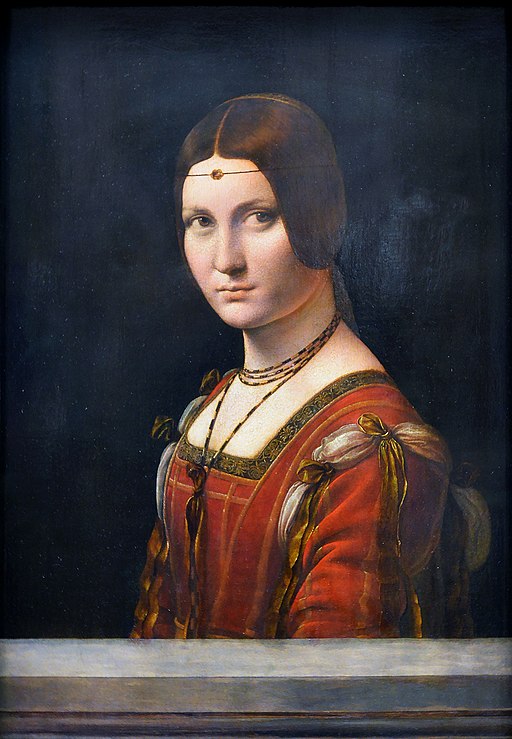 “La belle ferronnière” by Leonardo da Vinci is the portrait of an unknown woman, and her identity is shrouded in mystery.

“La belle ferronnière” was known as “Portrait of an Unknown Woman” as early as the seventeenth century, and it was believed that the sitter was the wife or daughter of an ironmonger or “a ferronnier.”

Thus one possible story to explain the title of the portrait.

However, it was also popularly claimed that the title alluded to a reputed mistress of Francis I of France, married to a certain Le Ferron.

The tale is a legend of revenge in which the aggrieved husband intentionally infects himself with syphilis, which he passes to the King by infecting his wife.

To add to this confusion in titles and identities, Leonardo’s “Lady with an Ermine,” had also been known, for a while, by this name “La Belle Ferronnière.”

The legend of revenge and the title were applied to “Lady with an Ermine.” The confusion was facilitated by the ornament worn on a delicate chain across the forehead, called a ferronnière.

Both women had headbands in their portraits. This coincidence led to the miss-naming of the “Lady with an Ermine” painting. The owner wanted to embellish their art with the revenge legend.

It is perhaps understandable that there are so many competing identities claimed for this portrait, as this painting is one of only four pictures of women painted by Leonardo:

A ferronnière is a style of headband that encircles the wearer’s forehead, usually with a small jewel suspended in the center. The original form of the headband was worn in late fifteenth-century Italy.

It was rechristened a ferronnière at the time of its revival in the second quarter of the nineteenth century for formal and evening wear.

The ferronnière is claimed to be named after a 1490s portrait by Leonardo da Vinci, the “La belle ferronnière,” where the sitter famously wears such an ornament.

However, this painting’s title was assigned in the 18th century, and the literal translation of “ferronnière” in English is “ironmonger.”

So was this painting named after her forehead ornament, or was the ornament named after the painting?

The nineteenth-century ferronnière was worn from the late 1820s to the early 1840s, and by the 1850s, it had fallen out of fashion.

Historians regard Leonardo as the prime example of the “Universal Genius” or “Renaissance Man,” an individual of unsatisfied curiosity and creative imagination.

He is considered one of the most diversely talented individuals ever to have lived.

Leonardo was born out of wedlock to notary Piero da Vinci and a peasant woman named Caterina in Vinci in the region of Florence. He was educated in the studio of Florentine painter Andrea del Verrocchio.

Much of his earlier working life was spent in the service of Ludovico il Moro in Milan. He later worked in Rome, Bologna, and Venice, and he spent his last years in France at a home awarded to him by Francis I of France.

Leonardo da Vinci’s ‘The Lady with an Ermine’