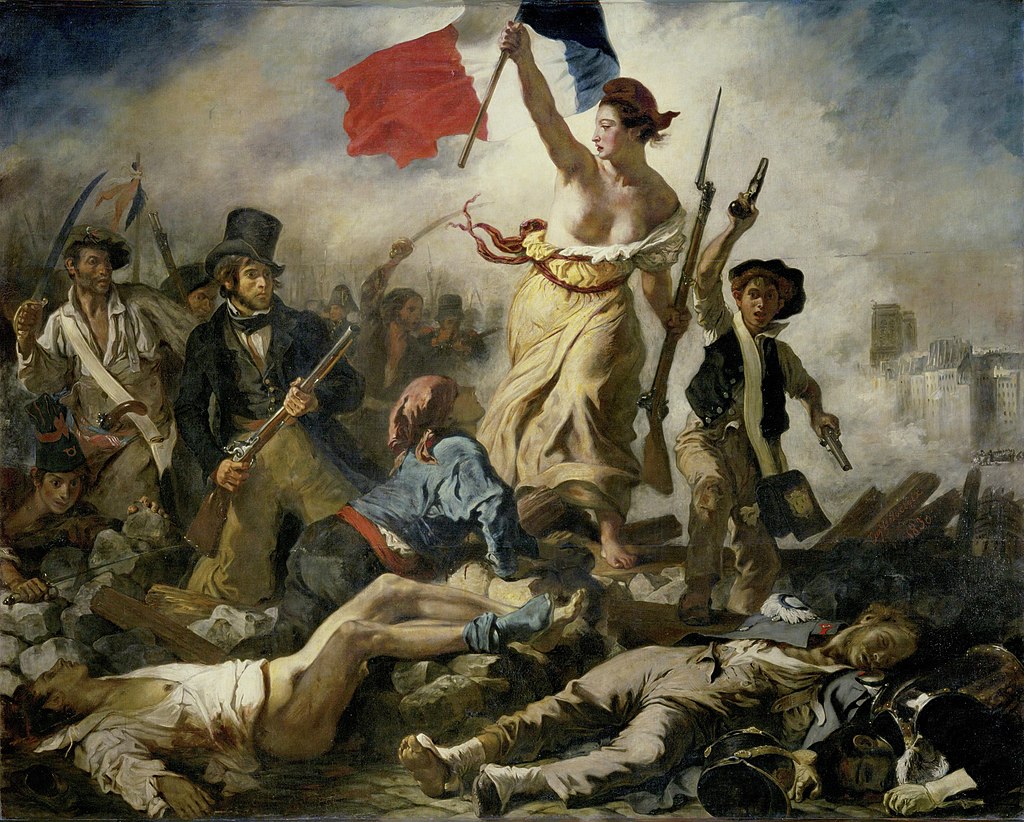 “Liberty Leading the People” by Eugène Delacroix commemorates the July Revolution of 1830 in France. A woman wearing the Phrygian cap of Liberty, personifying the concept of Liberty leads the people forward.

Liberty is climbing over a barricade and the bodies of the fallen, holding the flag of the French Revolution in one hand and a bayonetted musket with the other.

Delacroix depicted Liberty as both an allegorical goddess-figure and a woman of the people. The corpses at her feet act as a pedestal, from which Liberty strides, barefoot, and bare-breasted.

This painting is seen as a marker to the end of the Age of Enlightenment and the start of the Romantic Era. The fighters depicted as following Liberty, represent the range of French society.

The representations include the bourgeoisie represented by the man in a top hat, a student from a prestigious Paris school wearing the traditional bicorne and the revolutionary urban worker, in the form of the boy holding pistols.

They all have a fierceness and determination in their eyes. In the background is the city of Paris with a Tricolore flag that can be seen in the distance on the towers of Notre Dame on the right.

Delacroix was not the first artist to depict Liberty in a Phrygian cap; however, this painting is the best known early version of the figure commonly known as Marianne, a symbol of the French Republic.

The Phrygian cap or liberty cap is a soft conical cap with the apex bent over, associated in antiquity with various peoples in Eastern Europe.

The Phrygian hat that Liberty wears had come to symbolize liberty during the first French Revolution of 1789.

Marianne as a symbol of the French Republic

Marianne is a national symbol of the French Republic, a personification of Liberty and reason, and a portrayal of the Goddess of Liberty.

Marianne is displayed in many public places in France and holds a place of honor in town halls and law courts.

Her profile stands out on the official government logo of the country, is engraved on French euro coins, and appears on French postage stamps.

Marianne is one of the most prominent symbols of the French Republic and is officially used on most government documents. Marianne is a significant Republican symbol.

As a national icon, she represents opposition to monarchy and the championship of freedom and democracy against all forms of oppression.

Other national symbols of France include the tricolor flag, the national motto Liberté, Égalité, Fraternité, and the national anthem “La Marseillaise.”

The French Revolution of 1830, also known as the July Revolution, led to the overthrow of King Charles X, the French Bourbon monarch, and the ascent of his cousin, who himself would be overthrown in 1848.

It marked the shift from one constitutional monarchy, under the restored House of Bourbon, to another and the replacement of the principle of hereditary right with popular sovereignty.

This renewed French Revolution sparked uprisings in Brussels and the Netherlands, leading to separation and the establishment of the Kingdom of Belgium. The example of the July Revolution also inspired revolutions in Italy and Poland.

The flag of France is a tricolor flag featuring three vertical bands, colored blue, white, and red. It is known as the French Tricolor or simply the Tricolor.

The Tricolor has become one of the most influential flags in history. Its three-color scheme being copied by many other nations, both in Europe and the rest of the world.

The Tricolor became France’s national flag after the events depicted in this painting. The Tricolor was brought back after the July Revolution. It has been used ever since 1830, (except with a brief interruption for a few days in 1848).

Eugène Delacroix was an artist regarded as the leader of the French Romantic school.

Delacroix’s use of expressive brushstrokes shaped the work of the Impressionists, while his passion for the exotic inspired the artists of the Symbolist movement.

Liberty Leading the People by Delacroix

Symbolism in Liberty Leading The People

“Liberty, equality, fraternity, or death; – the last, much the easiest to bestow, O Guillotine!”
– Charles Dickens, A Tale of Two Cities