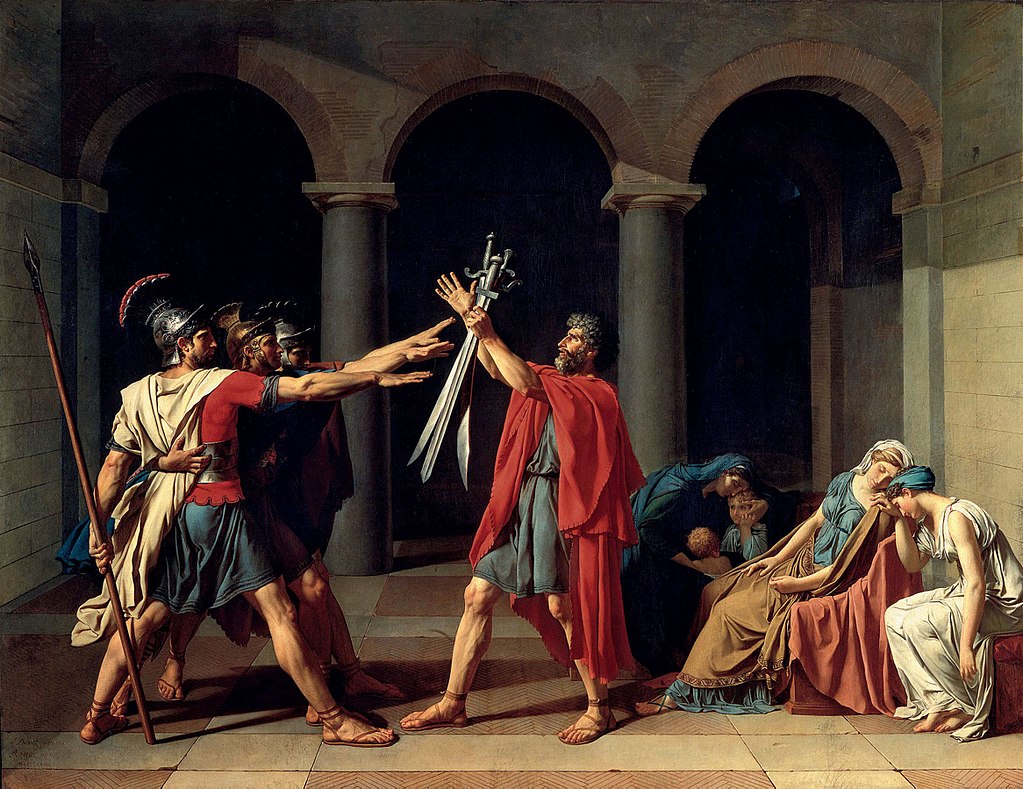 “Oath of the Horatii” by Jacques-Louis David

“Oath of the Horatii” by Jacques-Louis David depicts a scene from a Roman legend about a seventh-century BC dispute between two warring cities, Rome and Alba Longa.

It is one of the best-known history paintings in the Neoclassical style. Its theme stresses the importance of patriotism and self-sacrifice for one’s country and family.

The painting depicts the Roman Horatius family, from which three brothers had been chosen for a ritual duel. The duel was against three brothers of the Curiatii, a family from Alba Longa, to settle the disputes between the two cities.

The three brothers, all of whom agreed to sacrifice their lives for the good of Rome, are shown saluting their father, who holds their swords out for them.

In the bottom right corner are the women of the family who are also sacrificing for the state. One of the women Camilla, a sister to the Horatii brothers, is betrothed to one of the Curiatii fighters.

Another woman is a sister of the Curiatii, married to one of the Horatii. They weep in the understanding that, whichever side wins, they will lose someone they love.

As the revolution in France loomed, paintings urging loyalty to the state were popular, and “The Oath of the Horatii” became one of the defining images of the time.

At a joint conference between the two disputing cities, it was proposed that the dispute be resolved by some means other than mass bloodshed.

Both towns were concerned that the nearby Etruscans would fall upon the two Latin states if they were weakened by mutual war and unable to defend themselves.

It was agreed that a set of triplets from each side, three brothers Horatii and three Curiatii, would do battle for victory. The duel would thus determine which city would be the dominant member, without mass-slaughter.

The leaders of each city made vows that the outcome of the fight would bind both states. When the combat commenced, two of the Roman brothers were the first to fall.

The one surviving Roman brother then allowed the three Curiatii fighters to chase him. This strategy caused them to separate from each other, and then, he, in turn, killed each of the Curiatii brothers.

Thus the last Horatius brother won victory for Rome, and the Albans became a vassal state of Rome.

Not long afterward, war brock out between Rome and two other Etruscan cities. The Albans were ordered to march to battle with the Romans.

However, when the action commenced, the Alba Longa commander led his troops away from the battle, leaving the Romans to fight the Etruscans alone.

They only left the temples standing, and the entire population of Alba Longa was transported to Rome, thereby doubling the number of Roman citizens.

This painting became an immediate success with critics and the public, which increased David’s fame, allowing him to take on his students.

Oath of the Horatii

A Tour of the Louvre’s Paintings

The Oath of the Horatii – David

David, Oath of the Horatii

Louvre Museum – David The Oath Of The Horatii

“The artist must be a philosopher.”
– Jacques-Louis David