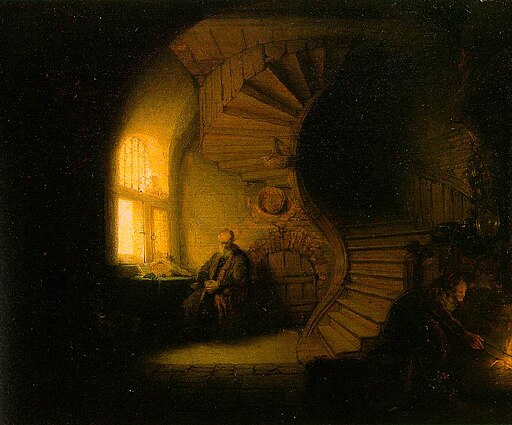 “Philosopher in Meditation” by Rembrandt

“Philosopher in Meditation” by Rembrandt depicts two figures in a partially vaulted interior that is dominated by the central wooden spiral staircase.

The architecture of the room includes stone, brick, and wood, with an arched window and arched doors.

This painting is one of the most geometrically complex works painted by Rembrandt. The composition comprises of many straight, curved, circular, and radiating lines.

The staircase is at the center of the composition, with the curved edges of the stair spiral orchestrating the consecutive straight lines.

The figure on the left is that of an older man seated at a table in front of a window. The man’s head is bowed and his hands folded in his lap.

The figure on the right is that of an older woman tending a fire in an open hearth. There is also a third figure of a woman standing in the stairs facing the viewer, but she is virtually invisible in the painting’s dark hue created by the aging of the varnish.

The middle figure is visible in the 18th and 19th century engraved reproductions of this painting.

The popularity of the painting can be gauged by its significant presence as an image on the internet, where it is often used to represent philosophy themes.

The title “Philosopher in Meditation” has, to a large extent, been responsible for the painting’s popularity as an emblem for philosophy.

A large book and a quill are among the objects on the table in front of the older man, which supports the traditional title of Philosopher.

The other objects in the painting suggest a domestic setting, yet the improbable architecture echos a riddle to be solved.

The panel is signed “RHL-van Rijn” and dated 1632 at the bottom and left of the center. The signature is quite challenging to make out; however, the style of the name is so rare in Rembrandt’s oeuvre, plus the date specificity has led to a debate about its authenticity.

Recent scholarship suggests that the painting depicts “Tobit and Anna waiting for their son Tobias.”

This interpretation was given in an auction catalog from 1738, the first documented source that refers to this painting.

The Book of Tobit is a book of scripture that is part of the Catholic and Orthodox biblical canons.

It is not found in Protestant or Jewish biblical canons. The Book of Tobit was one of Rembrandt’s frequent Old Testament sources.

The painting may show the blind Tobit and his wife Anna waiting for the return of their only son, Tobias, a scene that Rembrandt had previously painted in 1630.

The book tells the complex story of Tobit and his son’s Tobias journey.

Tobit is an Israelite living in Nineveh after Sargon II had deported the northern tribes of Israel to Assyria in 721 BC.

Tobit was raised by his grandmother and remained loyal to the worship of God at the temple in Jerusalem.

The main narrative is dedicated to Tobit’s son,  who is sent by his father to collect money in distant Media.

After a hazardous journey, Tobias arrived in Media, he meets the beautiful Sarah and the two marry.

After various challenges, Tobias and Sarah return to Nineveh to care for his parents, but Tobit tells his son to leave Nineveh before God destroys it according to prophecy.

After Tobit dies at an advanced age, Tobias returns to Media with his family.

The book is cited for its teaching on the intercession of angels, filial piety, and reverence for the dead.

Tobit is also referenced in the Meqabyan, a book considered canonical in the Ethiopian Orthodox Tewahedo Church.

Rembrandt van Rijn was an innovative and prolific master draughtsman, painter, and printmaker.

He is generally considered one of the greatest visual artists in the history of art and the most important in Dutch art history.

“Philosopher in Meditation” by Rembrandt

The Philosopher in Meditation by Rembrandt Van Rijn

“One cannot conceive anything so strange and so implausible that it has not already been said by one philosopher or another.”
– René Descartes