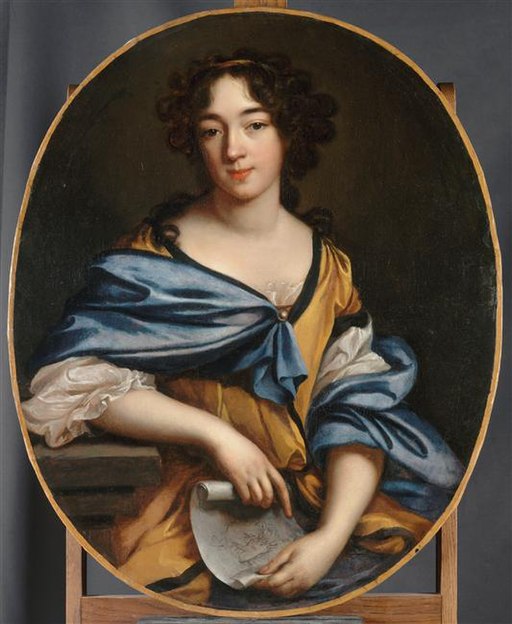 Self Portrait by Élisabeth Sophie Chéron

This Self Portrait portrays Élisabeth Sophie Chéron (1648 – 1711), who was a renaissance woman, acclaimed in her lifetime as a gifted painter, poet, musician, artist, and academic. At age 22, she was admitted to the Académie as a portrait painter and was the fourth woman painter to enter the academy. She exhibited regularly at the Salon, and at the same time, produced poetry and translations. She was fluent in Hebrew, Greek, and Latin.

Chéron published her book of Psalm paraphrases in 1694, and her literary talent was recognized in 1699 when she was named a member of the Accademia dei Ricovrati, in Padua. Her Psalms were later set to music. Her notable writings include:

Élisabeth Sophie Chéron was trained by her artist father, while still a child, in the arts of enameling and miniature painting. Her father was a Calvinist and endeavored to influence his daughter to adopt his religious belief. Her mother was a Roman Catholic, who persuaded Elizabeth to pass a year in a convent, during which time she ardently embraced the Catholic faith.

She was an affectionate daughter to both her parents and was indifferent to proposals of marriage throughout her life, many from brilliant men in her intellectual circle. In 1708, at age 60, and to the surprise of her friends, she married Jacques Le Hay, the King’s engineer, after which she was known as Madame Le Hay. She called her marriage a “philosophical union.”

She died at age sixty-three, and the following lines are placed beneath her portrait in the church:

“The unusual possession of two exquisite talents
will render Cheron an ornament to France for all time.
Nothing save the grace of her brush
could equal the excellencies of her pen.”

Self Portrait by Élisabeth Sophie Chéron