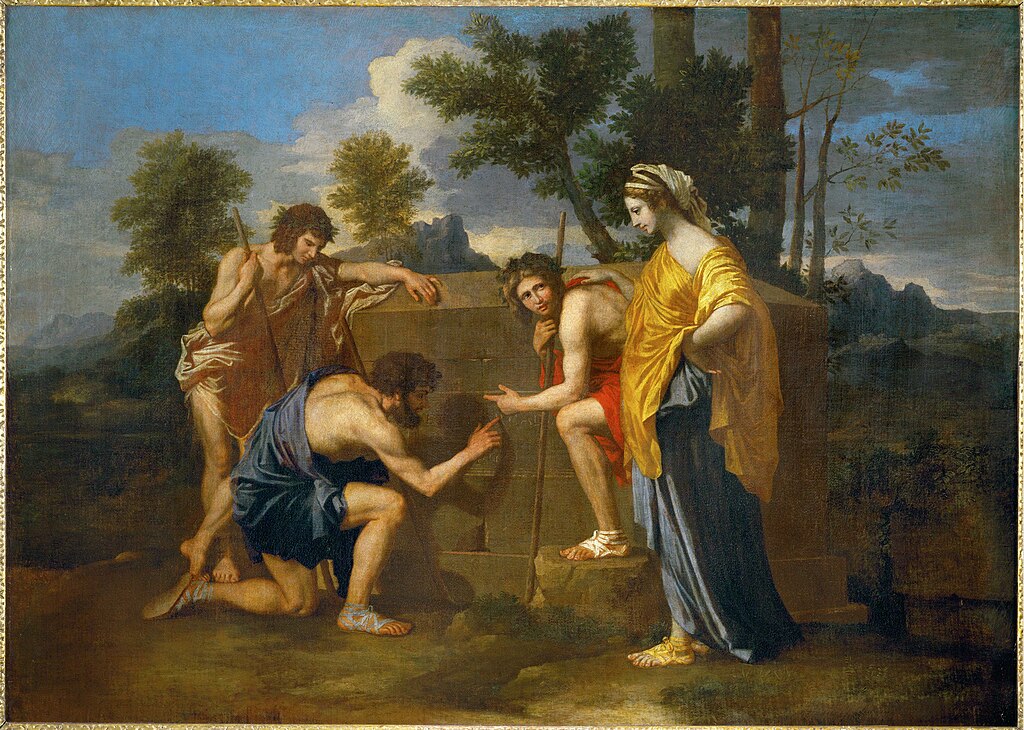 “The Arcadian Shepherds” by Nicolas Poussin depicts a pastoral scene with idealized shepherds from classical antiquity gathered around a tomb.

The painting’s original title was “Et in Arcadia ego”, which translates to “Even in Arcadia; there am I”. The traditional interpretation of this term is that “I” refers to Death, and “Arcadia” means a perfect land.

It is thus a reflection on mortality, especially the vanity of earthly life and the transient nature of all worldly goods and pursuits.

The term Arcadia symbolized pure, rural, idyllic life, far from the city. This term was used as a contrast to the many Ancient Greeks who lived in the city-states close to the sea and led the busy urban life of the polis.

Only the Arcadians, in the middle of the Peloponnese, led the ideal shepherd’s life because they had no cities.

There is, however, ambiguity in the phrase, and it is the subject of debate by historians. “Et in Arcadia ego” has been interpreted to also mean “I too [was] in Arcadia.”

This reading was common in the 18th and 19th centuries. Today the interpretation is that “ego” refers to “Death” and is the more modern interpretation.

Either way, the message was meant to set up an ironic contrast between the shadow of death and the usual idle pleasures of ancient Arcadia.

Poussin painted two versions of the subject under the same title. His earlier version, painted in 1627, is held at Chatsworth House.

This later version has a far more geometric composition, and the figures are much more contemplative. The mask-like face of the shepherdess echos the Classical “Greek profile”.

The official title of this painting “Et in Arcadia Ego” has been referenced in several literary, musical, and artistic work which include:

The line is traditionally understood as “Even in Arcadia [an ideal pastoral idyll], I [Death] am still present.”

He was a major inspiration for such classically oriented artists as Jacques-Louis David, Jean-Auguste-Dominique Ingres, and Paul Cézanne.

The Meaning of Et in Arcadia Ego

“Of all lies, art is the least untrue.”
– Gustave Flaubert