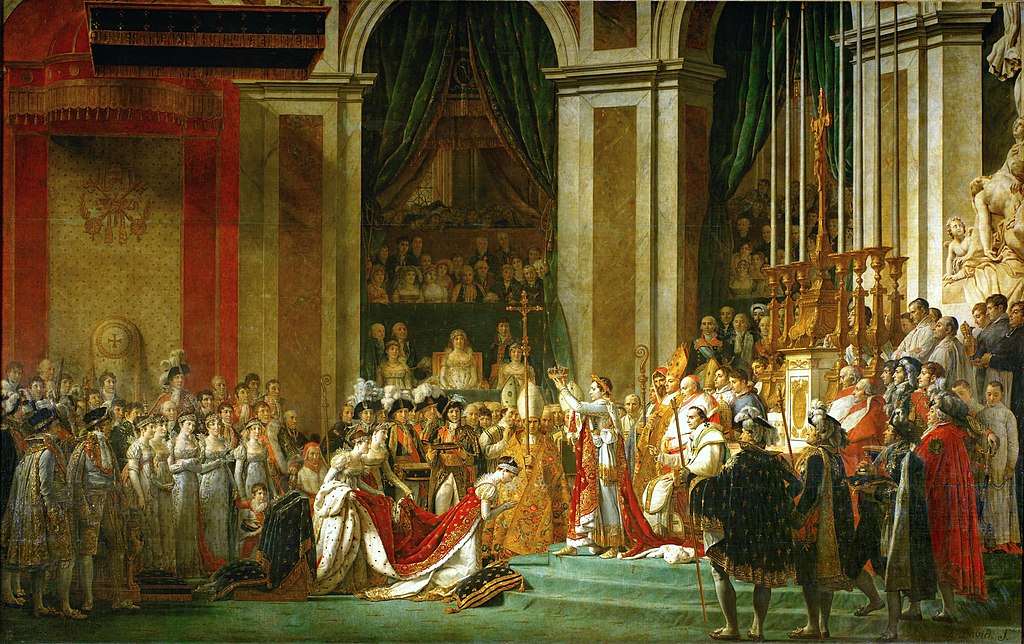 “The Coronation of Napoleon” by Jacques-Louis David

“The Coronation of Napoleon” by Jacques-Louis David shows all eyes turned towards Napoleon and the crown. He is the central subject of this composition.

Napoleon is standing, dressed in coronation robes similar to those of Roman emperors. The coronation of Napoleon as Emperor that took place on Sunday, December 2, 1804, was a masterful act of propaganda.

This painting, which is a large imposing painting at almost 10 meters (33 ft) wide by 6 meters (20 ft) tall, was part of the propaganda effort.

Napoleon wanted to establish the legitimacy of his imperial reign and new nobility. With this objective, he designed a ceremony, unlike that of any other in the history of coronations.

Napoleon was a ceremony created by Napoleon and held in the magnificent cathedral of Notre Dame de Paris in the presence of Pope Pius VII.

The Pope initially did not want to travel to Paris without an excellent religious reason. However, in order not to jeopardize the new balance between Church and State, the Pope accepted the request to attend the coronation.

However, at the moment, the Pope was to crown Napoleon. The Emporer took the crown from the Pope and put it on his head. This act was seen as a public humiliation of the Pope.

Napoleon brought together various rites and customs, incorporating rituals of Carolingian tradition, the ancien régime, and the French Revolution, all presented in excessive luxury.

The painting depicts many of the leading figures of the time, including:

David painted the copy based on the preparatory drawing he had for the original, and the two versions differ slightly.

The Coronation of Napoleon

WHO MADE YOU, EMPEROR?: The Coronation Of Napoleon by Jacques-Louis David

A Tour of the Louvre’s Paintings

The Coronation of Napoleon by David. The Louvre’s priceless masterpiece.

“History is a set of lies agreed upon.”
– Napoleon Bonaparte