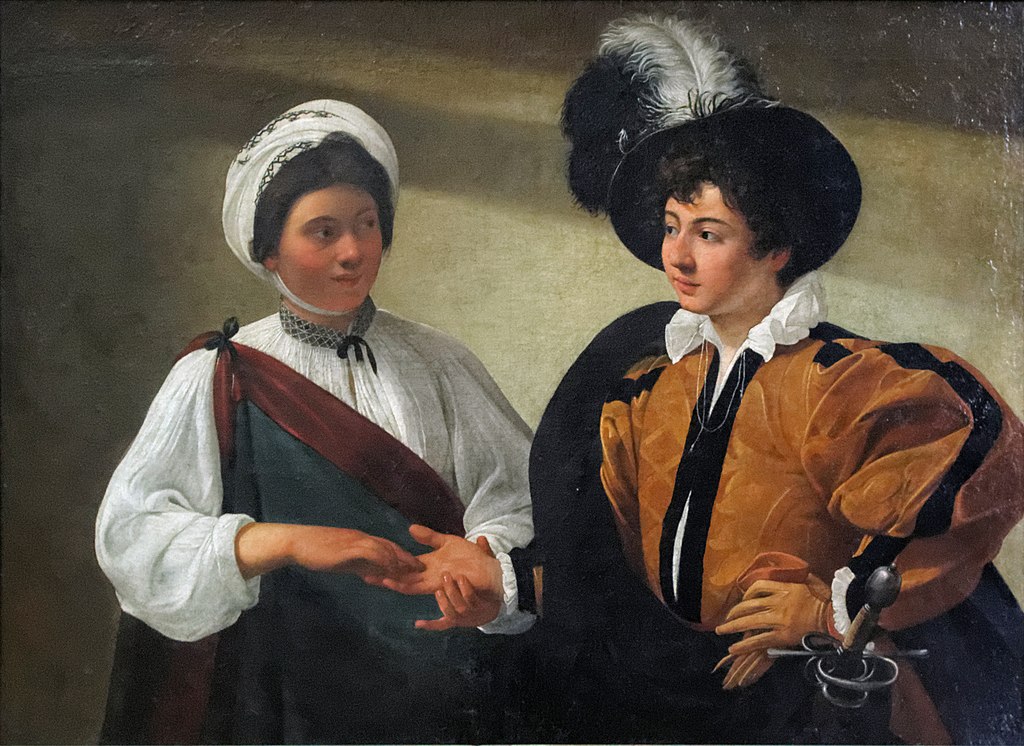 “The Fortune Teller” by Caravaggio

“The Fortune Teller” by Caravaggio shows a pretentiously dressed boy, having his palm read by a gypsy girl. The boy looks with anticipation as he gazes into her face, and she returns his gaze.

The boy’s feathered hat, the gloves, and the oversized dagger immediately tell us that the boy is not sophisticated or experienced.

The gypsy girl with her light linen shirt and her exotic wrap is also intended to represent a “type” rather than as a real person.

The Italian Baroque artist, Caravaggio, painted two versions of this painting. The first in 1594 which is now in the Capitoline Museums in Rome and his second version in 1595, which is in the Louvre Museum, Paris.

In this second version, the light is more radiant, and the cloth of the boy’s doublet and the girl’s sleeves more finely textured.

The boy becomes more childlike and more innocently vulnerable, the girl less wary-looking, leaning in towards him, more in command of the situation.

Close inspection of the first version of this painting reveals what the young man has failed to notice that the girl is removing his ring as she gently strokes his hand.

In this second version, this sleight of hand is not as clear to the viewer but is assumed based on the previous version of the painting. 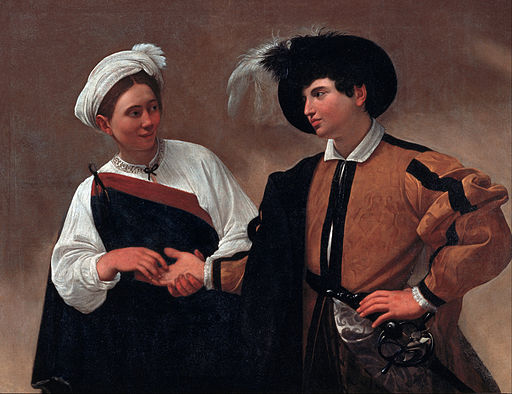 “Good Luck” by Caravaggio was the first version, which shows the girl can be seen removing his ring. Caravaggio was one of the founders of genre painting in European art.

At the time, Genre Paintings mainly depicted scenes of everyday life, but with a hidden or underlying meaning intended to communicate a moral theme.

The theme of a young man inexperienced in the affairs of life encountering a lady who is experienced and shrewd proved to be a favorite subject.

The young boy is carried away by the gentle touch of her fingers. He does not notice that he is being relieved of his ring.

The composition does not include any background details to indicate the time and place but instead is focused on the encounter of two very different individuals, participating in an exchange that is timeless and universal.

Genre art is the pictorial representation of scenes or events from everyday life, such as domestic settings, building interiors, festive occasions, inn or market scenes, and street scenes.

Such genre works may be realistic, imagined, or romanticized by the artist.

Genre works of the Dutch Golden Age and Flemish Baroque painting may also be used as an umbrella term for painting in various specialized categories.

Categories such as still-life, marine art, architectural painting, and animal painting, as well as genre scenes proper where the emphasis is on human figures.

Paintings were divided into a hierarchy of genres, with history painting at the top, as the most challenging and therefore prestigious, and still life and architectural painting at the bottom.

Caravaggio (1571 – 1610) was active in Rome, Naples, Malta, and Sicily from the early 1590s to 1610. His paintings combine the realistic observation of the physical and emotional human situation with the dramatic use of lighting.

He made the technique of darkening shadows and transfixing subjects in bright shafts of light his dominant stylistic element.

His influence on the new Baroque style that emerged from Mannerism was profound. In the 20th century, interest in his work revived, and his importance to Western art has been elevated.

Caravaggio trained in Milan before moving in his twenties to Rome. He developed a considerable name as an artist, and as a violent and provocative man.

A brawl led to a death sentence for murder, which forced him to flee to Naples. There he again established himself as one of the most prominent Italian painters of his generation.

He traveled in 1607 to Malta and on to Sicily and pursued a papal pardon for his sentence.

In 1609 he returned to Naples, where he was involved in a violent clash; his face was disfigured, and rumors of his death circulated.

Questions about his mental state arose from his erratic and bizarre behavior. He died in 1610 under uncertain circumstances while on his way from Naples to Rome.

Virtual Tour of the Louvre

Caravaggio: A Life Sacred and Profane

‘The Fortune Teller’ from Act I of ‘Caravaggio’

“If Caravaggio were alive today,
he would have loved the cinema;
his paintings take a cinematic approach.”
– Martin Scorsese