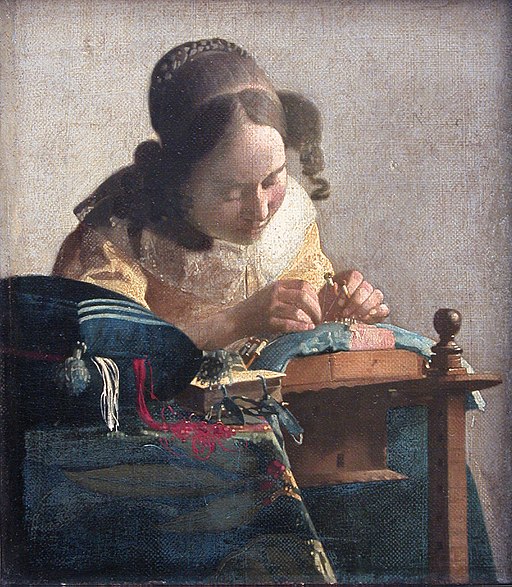 “The Lacemaker” by Johannes Vermeer shows a young lacemaker concentrating on her task. She is holding up a pair of bobbins in her left hand as she carefully places a pin in the pillow on which she is making her bobbin lace.

The girl is set against a blank wall to eliminate any distractions from the image of concentration and focus. The techniques of lacemaking are portrayed in detail and accurately.

Vermeer may have used a camera obscura while composing the work. Many of the optical effects that are typical of photography can be seen, particularly the blurring of the foreground.

By rendering areas of the canvas as out-of-focus, Vermeer can suggest a depth of field in a manner unusual of Dutch Baroque painting of the era.

Vermeer has painted the girl’s face and body and the pattern of the material on which she is working in an abstract style.

The girl’s hands, the curls of her hair are all depicted in an abstract manner unusual for the era in which Vermeer worked.

The red and white of the lace are shown spilling from the sewing cushion providing the impression of a near liquid form.

The blurring of these threads contrasts sharply with the precision of the lace being working on by the lacemaker.

This masterpiece is the smallest of Vermeer’s paintings and, in many ways, one of his most abstract.

Camera obscura refers to the optical phenomenon that occurs when an image at the other side of a screen is projected through a small hole in that screen onto the surface opposite the opening.

Camera Obscura, with a lens in the opening, has been used since the second half of the 16th century. The technique became famous as an aid for drawing and painting.

As a drawing aid, it allowed the tracing of a projected image to produce a highly accurate representation, especially as a way to achieve a correct graphical perspective.

In the 17th century, Dutch Masters, such as Johannes Vermeer, were known for their magnificent attention to detail.

It has been widely speculated that they made use of the camera obscura, but the extent of their use by artists at this period remains a matter of controversy.

In the first half of the 19th century, the camera obscura box was developed further into the photographic camera.

The camera obscura boxes were used to expose light-sensitive materials to the projected image, creating the first photographs.

“Thanks to art, instead of seeing one world, our own, we see it multiplied, and as many original artists as there are, so many worlds are at our disposal, differing more widely from each other than those which roll round the infinite and which, whether their name be Rembrandt or Vermeer, send us their unique rays many centuries after the hearth from which they emanate is extinguished.”
– Marcel Proust