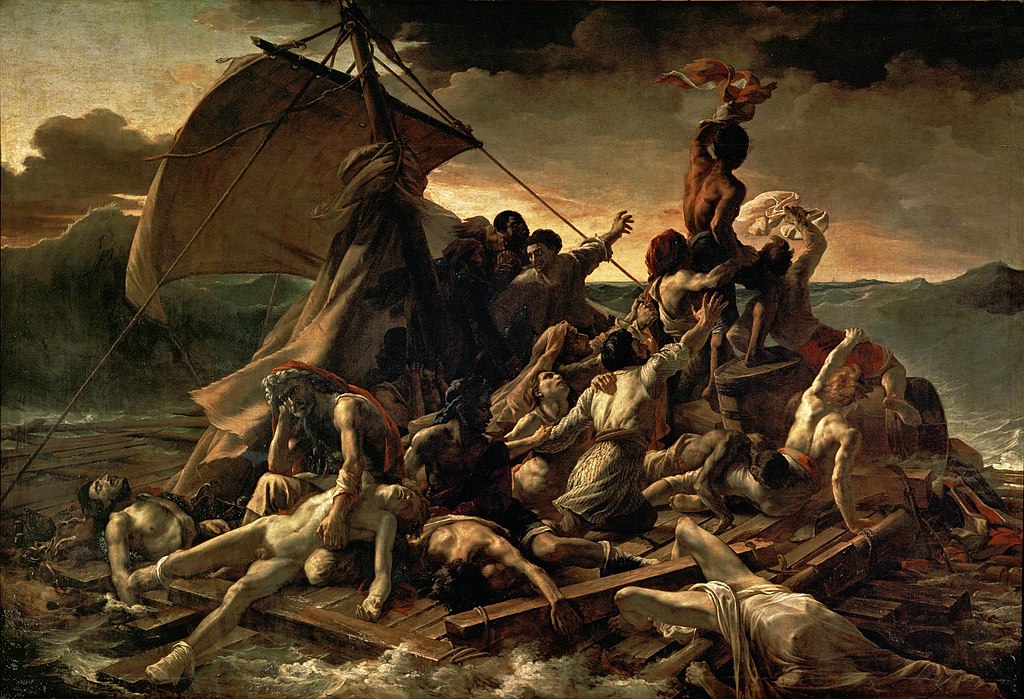 The Raft of the Medusa by Théodore Géricault

The Raft of the Medusa by Théodore Géricault depicts the aftermath of the wreck of the French naval frigate Méduse, which ran aground off the coast of Mauritania in 1816.

About 150 of the crew were set adrift on a hurriedly constructed raft. All but 15 died in the 13 days before their rescue. The survivors had endured starvation and dehydration, and some survived using cannibalism.

The event became an international scandal, and the captain was accused of incompetence.

Although the painting retains many elements of the traditions of history painting, including its choice of subject matter and its dramatic presentation, it represents a break from the calm and order of the Neoclassical school.

This over-life-size painting was completed at the age of 27 and an icon of French Romanticism.

The Méduse event fascinated Géricault, who undertook extensive research and produced many preparatory sketches. He interviewed two of the survivors and constructed a detailed scale model of the raft.

Géricault visited hospitals and morgues where he could view, first-hand, the color and texture of the flesh of the dying and dead.

The painting proved highly controversial at its first appearance in the 1819 Paris Salon, attracting passionate praise and condemnation.

However, it established his international reputation and today is widely seen as seminal in the early history of the Romantic movement in French painting.

The painting’s influence can be seen in the works of Delacroix, Turner, Courbet, and Manet.

Méduse was a 40-gun frigate of the French Navy, launched in 1810. She took part in the Napoleonic Wars, and in 1816, following the Bourbon Restoration, Méduse was armed to ferry French officials to the port of Saint-Louis, in Senegal.

Through inept navigation by her captain, the Méduse struck the Bank of Arguin off the coast of present-day Mauritania and became a total loss.

Most of the 400 passengers on board evacuated, however, the Méduse was not carrying enough lifeboats to take all of the passengers.

About 150 men were forced to take refuge on an improvised raft towed by the frigate’s launches. A raft measuring 20 meters (66 ft) long and 7 meters (23 ft) wide was constructed with wood salvaged from the wreck.

The towing of the raft proved impractical, and the lifeboats soon abandoned the raft and its passengers to the open ocean. The lifeboats, with the captain and Governor aboard, sailed away to safety.

The situation aboard the raft rapidly turned disastrous. Among the provisions were casks of wine instead of water. Dozens of men were washed into the sea by a storm, while others rebelled and were killed by officers.

When supplies ran low, injured men were thrown into the sea, and some of the survivors resorted to cannibalism. After 13 days at sea, the raft was discovered, with only 15 men still alive.

News of the tragedy stirred considerable public emotion, making Méduse one of the most infamous shipwrecks. Two survivors, a surgeon, and an officer wrote a widely read book about the incident.

Théodore Géricault (1791 – 1824) was an influential painter, although he died young. He was one of the pioneers of the Romantic movement.

His paintings are noteworthy for their technical skill, expressive realism, and psychological insights.

The Raft of the Medusa

The Raft of the Medusa (Géricault)

Raft of the Medusa

Theodore Gericault The Raft of the Medusa

Gericault, Raft of the Medusa

Death Raft: The Wreck of The Medusa

“The man who has experienced shipwreck shudders even at a calm sea.”
– Ovid