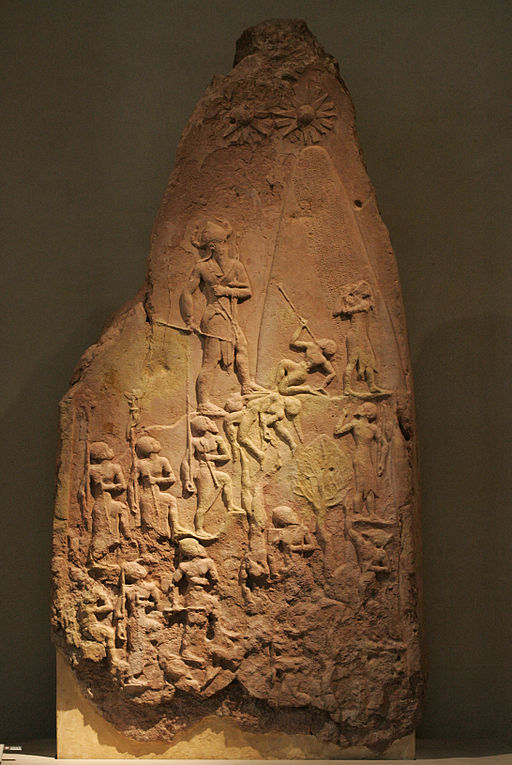 The Victory Stele of Naram-Sin dates to about 2250 BC, to the time of the Akkadian Empire. The relief depicts King Naram-Sin leading the Akkadian army to victory over the Lullubi, a mountain people from the Zagros Mountains.

It shows the King crossing the steep slopes into enemy territory. On the left are the disciplined imperial forces marching in rank over the disordered defenders that lay broken and defeated.

King Naram-Sin is shown as the most important figure as he is towering above his enemy and his troops, as all eyes gaze up toward him.

The weak opposing forces are shown being thrown from the mountainside, impaled by spears, fleeing and begging for mercy as well as being trampled underfoot by the King.

This sculpture depiction on the Victory Stele of Naram-Sin is unique in many ways. Most dramatically, the stele depicts the triumph diagonally, instead of horizontally, with the illusion of movement up the mountain with the King at the top where everyone can look up to him.

The other unique aspect of this sculpture is that Naram-Sin is shown wearing a bull-horned helmet. Up to this time, only the Gods only wore helmets of this type.

This stele is portraying Naram-Sin as a victorious conqueror due to his divine status. Naram-Sin is also shown gazing up toward two stars, indicating that Naram-Sin is a god, blessed by deceased kings and powerful of gods.

This Victory Stele reinforces the uncivilized and primitive nature of the enemy to justify the conquest and commemorate the King’s divine victory.

The Lullubi king Satuni appears standing to the right of the King, imploring the Akkadian King to spare him. Lullubi victims are usually shown with pointed beards and long braided hair.

The stele was broken off at the top when it was stolen and carried off by the Elamite forces in the 12th century BC, and it was found at Susa in 1898.

Naram-Sin, whose name means “Beloved of the Moon God Sîn”, was a ruler of the Akkadian Empire (reigned c. 2254–2218 BC) and was the third successor and grandson of King Sargon.

Under Naram-Sin, the empire reached its maximum strength. He was also the first Mesopotamian King known to have claimed divinity for himself, taking the title “God of Akkad”, and the first to claim the title “King of the Four Quarters, King of the Universe”.

Naram-Sin defeated various northern hill tribes in the Zagros, Taurus, and Amanus Mountains, expanding his empire up to the Mediterranean Sea and Armenia.

The king list gives him a very long reign, which was mostly dominated by military action. At one point in his reign, much of the empire, led by the city of Kish, rose in rebellion, and it was put down firmly.

Stele of Naram Sin other Sculpture