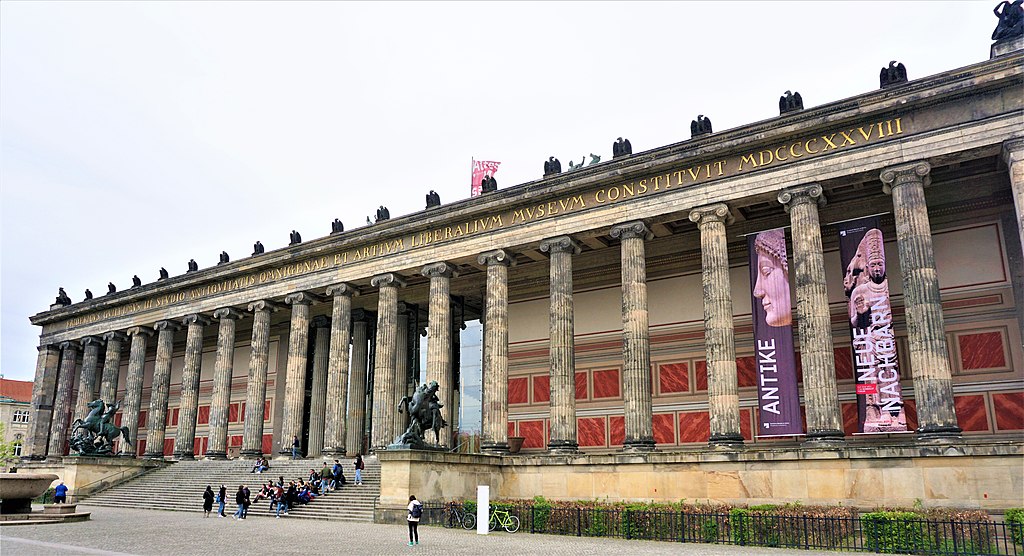 A Virtual Tour of the Altes Museum

The Altes Museum, which is German for Old Museum, is on Museum Island in Berlin, Germany. The museum houses the ancient history collection.

The museum building was built between 1823 and 1830 in the neoclassical style to accommodate the Prussian royal family’s art collection. Until 1845, it was called the Königliches Museum (Royal Museum).

Since 1998, the Collection of Classical Antiquities has displayed its Greek collection, including the treasury, on the ground floor of the Altes Museum. Special exhibitions are presented on the second floor of the museum.

A Virtual Tour of the Altes Museum

Peering out from between the closed cheekpieces of the Ionian helmet are two almond-shaped eyes. As the only visible facial features, they define the warrior as a war machine.

The figure could be Ares, the Greek god of war, or Apollo, or a legendary hero warrior who died in battle. The type of armor shown was worn by Spartan foot soldiers and is carved to follow the warrior’s musculature.

The stomach muscles are highly stylized, and two spirals mark the strong pectoral muscles on the chest.

This Amphora, with the depiction of a Funerary Procession, is a ceramic vase from the Greek Late Geometric Period, which is characterized by dense and detailed decorations.

Ancient Greek funerary urns were decorative grave markers that were designed to resemble liquid-holding vessels. These decorated vases were placed on gravesites as a mark of élite status.

Wealthy Greeks who could afford it had luxuriously painted ones Funerary Amphora. Funerary vases on male graves, like this example, had themes of military prowess or athletics. The motif of the horse, a status symbol of the aristocracy, is omnipresent in the Late Geometric Art.

Statuette of a Horse in Geometric Style

This Statuette of a Horse in Geometric Style is a cast bronze stallion on a pierced base that comes from the Peloponnese, Greece, most probably from the Zeus Sanctuary in Olympia.

Horse figures are among the most common dedications of geometric time. This stallion is one of the most significant surviving examples of its type and probably created as a votive offering.

This statue of the Deified Empress Livia is an early imperial statue after a Greek model of the Goddess Hera from the 5th century BC.

She is depicted with divine attributes such as the cornucopia, which is a promise of fortune and prosperity through the activities of the Roman imperial family.

In classical antiquity, the cornucopia, also called the horn of plenty, was a symbol of abundance and nourishment, commonly a large horn-shaped container overflowing with produce, flowers or nuts.

This Votive Relief dedicated to Vesta has an inscription that states that “the baker C. Pupius Firminus and his wife Mudasena Trophime dedicated this relief to the goddess Vesta.”

This votive dedication was probably installed in a sacred place for primarily religious and sometimes social ritual purposes. Such items are a feature of modern and ancient societies and are generally made to gain favor.

This Votive Relief was either made in anticipation of a particular wish or after the wish has been fulfilled. The offering may also represent a gift to the deity, in general thanks and gratitude with a public ritual purpose.

This sculptured marble head of Athena has been restored and set on a modern bust. It depicts Athena wearing a Corinthian Helmet and belongs to a series of copies made after a colossal statue of Athena from around 400 BC.

The style of the head is referred to as Velletri Type in reference to the Athena of Velletri in the Louvre Museum. The oval face and the sharpness of the eyebrow ridge, nose, and eyes mirror those of the bust of the helmeted Pericles at British Museum.

Since the Renaissance, Athena has become an international symbol of wisdom, the arts, and classical learning. Western artists have often used Athena as a symbol of freedom and democracy.

This large Lion marked a grave as a single monument or together with a counterpart as a cornerstone in a monumental tomb district of late classical Athens.

The lion is crouching with its head turned to the right and initially provided symbolic protection to a grave. The lion’s face and mane are stylized but realistic.

He wrinkles his snout, and his teeth are bared in a snarl. In antiquity, walled family burial plots lined the roads out of Athens. Sculpted lions such as this one, were placed at the corners of the plot and were especially popular in the 300s B.C.

Map for the Altes Museum, Berlin

“We can only see a short distance ahead, but we can see plenty there that needs to be done.”
-Georg Wilhelm Friedrich Hegel