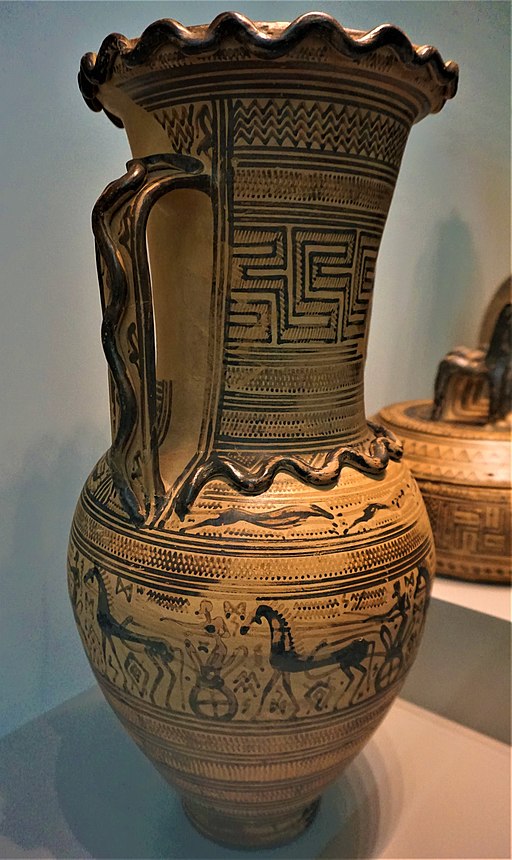 This Amphora, with the depiction of a Funerary Procession, is a ceramic vase from the Greek Late Geometric Period, which is characterized by dense and detailed decorations.

These decorated vases were placed on gravesites as a mark of élite status. Wealthy Greeks had luxuriously painted Funerary Amphora. Funerary urns on male graves, like this example, had themes of military prowess or athletics.

The motif of the horse was a status symbol of the aristocracy. It is omnipresent in the Late Geometric Art.

The human forms are easily distinguished because they do not overlap with one another. The painted black forms were discernible from one another against the color of the clay body.

The male was depicted with a triangular torso, an egg-shaped head with a blob for a nose and long cylindrical thighs and calves. Female figures were also abstract, and their long hair was depicted as a series of lines, as were their breasts, which appeared as strokes under the armpit.

Geometric art is a phase of Greek art, mainly characterized by geometric motifs in vase painting that flourished towards the end of the Greek Dark Ages, circa 900 BC – 700 BC.

Its center was in Athens, and from there, the style spread among the trading cities of the Aegean. The Greek Dark Ages are also called the Geometric period in reference to this characteristic pottery style.

By the Late Geometric period (760–700 BC), the decorative zones had increased with the creation of a laced mesh. Also, the meander dominates and is placed in the most critical area in the metope.

The meander design was arranged between the handles. This technique was a continuation of the Middle Geometric period but now included images of animals and the human form.

People and animals are depicted geometrically in a dark glossy color. The remaining vessel is covered by strict zones of meanders, crooked lines, circles, swastikas, in the same graphical concept. Later, the central tragic theme of the wail declined.

Funerary vases not only depicted decorated scenes, but they also had practical purposes, either holding the ashes or being used as grave markers. To the Greeks, an omission of proper burial was an insult to dignity.

The mythological context of a proper burial relates to the Greeks’ belief in continued existence in the underworld that will disallow the dead to maintain peace in the absence of an appropriate ritual of burial.

“For me to die for Greece is better than to be the sole ruler over the people of my race.”
– Leonidas of Sparta