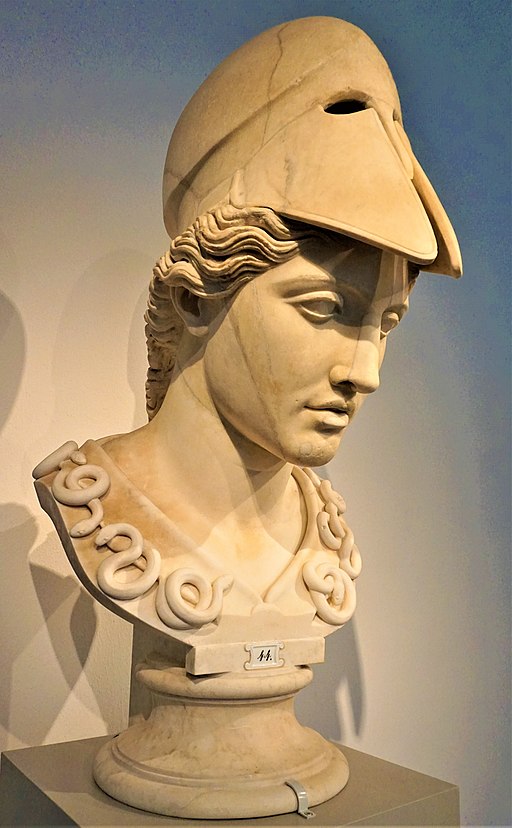 This sculptured marble head of Athena has been restored and set on a modern bust. It depicts Athena wearing a Corinthian Helmet and belongs to a series of copies made after a colossal statue of Athena from around 400 BC.

The style of the head is referred to as Velletri Type. This type of description is in reference to the Athena of Velletri in the Louvre Museum.

The oval face and the sharpness of the eyebrow ridge, nose, and eyes mirror those of the bust of the helmeted Pericles at British Museum.

Since the Renaissance, Athena has become an international symbol of wisdom, the arts, and classical learning. Western artists have often used Athena as a symbol of freedom and democracy.

The Athena of Velletri is a type of classical marble statue of Athena, wearing a helmet. All figures of this type are 1st-century Roman copies of a lost Greek bronze, possibly a bronze of 430 BC by Kresilas.

Plaster casts of the sculpture, probably taken from the original Athena, have been found in excavations of a Roman copyist’s workshop at Baiae.

These casts show that Kresilas’s bronze was of the same dimensions as the Louvre copy, which is 3.05 meters.

Many ancient copies of the bronze have been found, and the Baiae discovery suggests the industrial-scale production of this sculpture.

However, the most famous is the example that was found in the ruins of a Roman villa, in a vineyard near Velletri in 1797, which is now in the Louvre.

The Louvre version has traces of red color in the hair and around the eyes and mouth, which was a preparatory layer for a full polychromatic scheme. 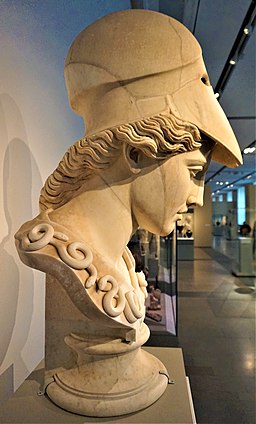 Athena is an ancient Greek goddess associated with wisdom, handicraft, and warfare, who was later blended with the Roman goddess Minerva.

Athena was regarded as the patron and protectress of various cities across Greece, particularly the city of Athens, from which she most likely received her name.

She is usually shown in art, wearing a helmet and holding a spear. Her primary symbols include owls, olive trees, snakes, and the Gorgoneion.

The Parthenon on the Athenian Acropolis is dedicated to her, along with numerous other temples and monuments.

Her chief festival in Athens was the Panathenaia, which was celebrated in midsummer and was the most important festival on the Athenian calendar. This festival is depicted on the Parthenon Frieze.

In Greek mythology, Athena was believed to have been born from the head of her father, Zeus. This story was carved in marble as part of the Pedimental Sculptures of the Parthenon.

In the founding myth of Athens, Athena won a competition with Poseidon for the patronage of the city by creating the first olive tree.

Along with Aphrodite and Hera, Athena was one of the three goddesses whose feud resulted at the beginning of the Trojan War.

She plays an active role in the Iliad, in which she assists the Achaeans, and, in the Odyssey, she is the divine counselor to Odysseus. 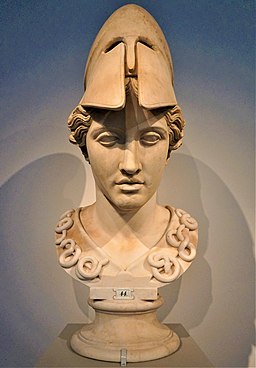 Athena, the Greek goddess of Wisdom, War and Military Strategy

“The measure of who we are is what we do with what we have.”
– Ancient Greek Proverb