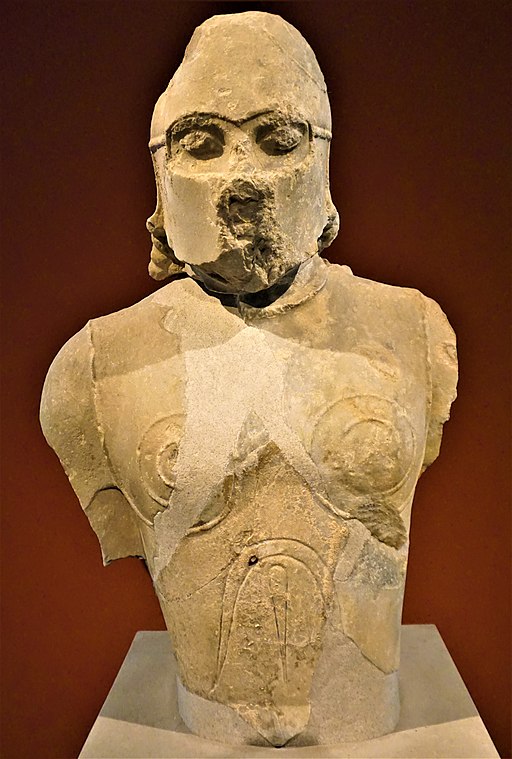 Peering out from between the closed cheekpieces of the Ionian helmet are two almond-shaped eyes. As the only visible facial features, they define the warrior as a war machine.

The figure could be Ares, the Greek god of war, or Apollo, or a legendary hero warrior who died in battle. The type of armor shown was worn by Spartan foot soldiers and is carved to follow the warrior’s musculature.

The stomach muscles are highly stylized, and two spirals mark the strong pectoral muscles on the chest.

This torso of a Hoplite Warrior was restored from four large fragments. It was found about 1914 at the Heraion of Samos, which was a large sanctuary to the goddess Hera, in the southern region of Samos, Greece.

The pieces were reassembled and the gaps filled by museum conservators. Although it is incomplete, this life-size depiction of a fully armored warrior is unique in Archaic Greek sculpture.

Hoplites were citizen-soldiers of Ancient Greek city-states who were primarily armed with spears and shields. Hoplite soldiers utilized the phalanx formation to be effective in a war with fewer soldiers than the enemy.

The phalanx formation discouraged the soldiers from acting alone, for this would compromise the formation. The hoplites were primarily represented by free citizens who were able to afford the bronze armor suit and weapons.

Hoplites were not professional soldiers and often lacked sufficient military training. However, some states did maintain a small élite professional unit, known as the “chosen.”

In the modern Hellenic Army, the word hoplite is used to refer to an infantryman.

In the 8th or 7th century BC, Greek armies adopted a military innovation known as the phalanx formation. The formation proved successful in defeating the Persians when employed by the Athenians at the Battle of Marathon in 490 BC.

The Persian archers who fought in the Battle of Marathon failed because their bows were too weak for their arrows to penetrate the wall of Greek shields that made up the phalanx formation.

The Greeks also employed the phalanx in the Second Greco-Persian War.

The rich upper-class hoplites typically had a bronze cuirass, which was a rigid metal cover for the torso, of either the bell or muscled variety, as in this statue.

Also, a bronze helmet with cheek plates, as well as greaves or the legs and other body armor. The heavily armored Hoplite armor passed down in families since it was expensive to manufacture.

Their armor was made of full bronze, weighing nearly 32 kilograms.

The Heraion of Samos was a large sanctuary to the goddess Hera, in the southern region of Samos, Greece.

The Late Archaic Heraion of Samos was the first of the large free-standing Ionic temples, but its predecessors at this site reached back to the Geometric Period of the 8th century BC, or earlier.

The site has been documented by archaeologists who have established a chronology against which the full range of votive objects deposited at the Heraion from the 8th century onward can be compared.

Several figurines of Isis nursing Horus have been found at the site, indicating an association with Hera and Isis.

“For me to die for Greece is better than to be the sole ruler over the people of my race.”
– Leonidas of Sparta