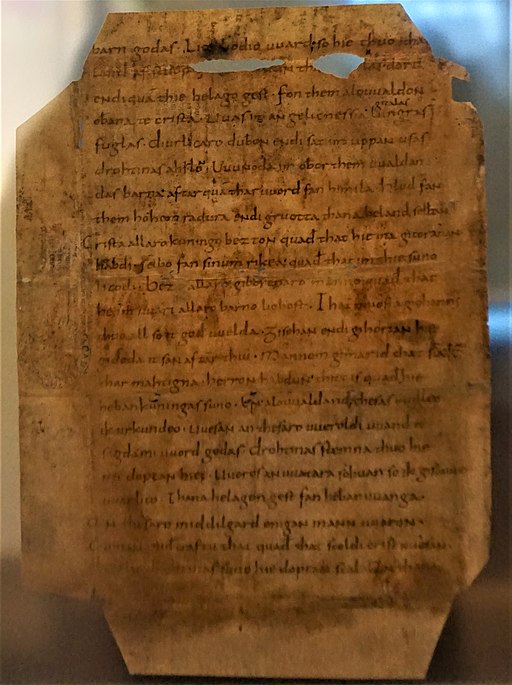 Heliand – The Saxon and Viking Bible

This is a fragment of the Heliand (Fragment P) from 830 AD, written as an epic poem in the Old Saxon language, depicting the life of Christ in a familiar way for the German people.

The Heliand was written at the request of the Emperor to combat Saxon ambivalence toward Christianity.

The Saxons were forced to convert to Christianity in the late 8th to early 9th century after 33 years of conflict between the Saxons and the Franks under Charlemagne.

The Heliand created a cultural synthesis between Christianity and Germanic warrior society.

The poem is a Biblical paraphrase that recounts the life of Jesus in the alliterative verse style of a Germanic epic. Christ is presented as the hero who does not enter Jerusalem, but rather a castle.

This approach to the narrative of Christ made it more relevant to the then prevailing German culture. The Heliand was in Old Saxon, and the title means savior in Old Saxon.

Heliand is the most extensive known work of written Old Saxon, but the identity of the author is uncertain, and there is a scholarly debate about the authorship.

The poem must have been relatively popular and widespread because it exists in two manuscript versions and four fragmentary versions. It takes up about 6,000 lines.

It was first printed in 1562, and while it has no authority in the scriptures, it is generally deemed to be authentic to 9th century Germany.

Fragment of the Heliand

A Reading of The Heliand (The Saxon Gospel)

“We can only see a short distance ahead, but we can see plenty there that needs to be done.”
-Georg Wilhelm Friedrich Hegel