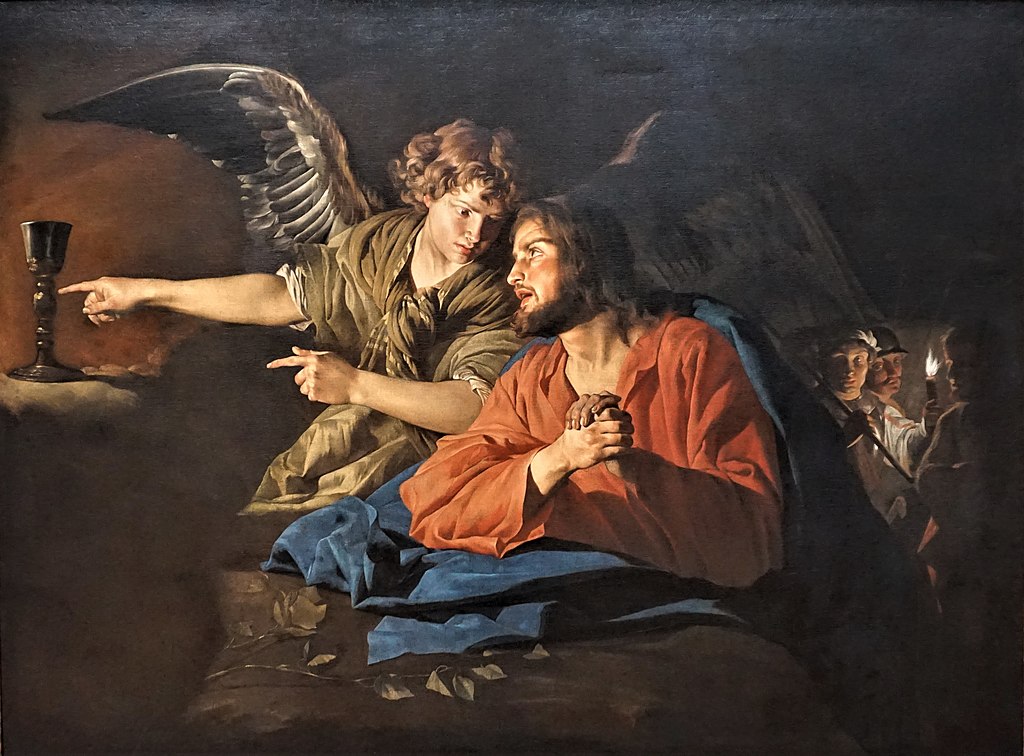 “Christ on the Mount of Olives” by Matthias Stom

“Christ on the Mount of Olives” by Matthias Stom depicts Christ kneeling at a stone rock. His hands folded in fervent prayer, turning to the angel, who is physically and spiritually close to him.

Christ’s eyes follow the angel’s powerful gesture, pointing to the cup, mystically glowing at the left of the picture. Judas and the soldiers are shown at the right in the background, lit by the white light of a candle.

The shadowy features of this group underline the threatening nature of the event. The sleeping disciples and any detailed representation of the location are omitted.

The contrast light and shade have been powerfully developed in this night scene, with supernatural light striking the left and adding to the drama.

The two detailed faces, inclined towards each other, and their strong expressions form the center of the picture, with the angel’s wings spanning almost the entire width of the painting.

The faces are expressive and are further dramatized by the detailed heavy garments with their rich folds.

Agony in the Garden

According to the Gospels, immediately after the Last Supper, Jesus took a walk to pray. Jesus was accompanied by three Apostles whom he asked to stay awake and pray.

He moved a stone’s throw away from them, where He felt overwhelming sadness and anguish and said

“My Father, if it is possible, let this cup pass me by. Nevertheless, let it be as you, not I, would have it.”

Then, a little while later, He said, “If this cup cannot pass by, but I must drink it, your will be done!” He said this prayer thrice, checking on the three apostles between each prayer and finding them asleep.

He commented: “The spirit is willing, but the flesh is weak.” An angel came from heaven to strengthen him.

During his agony as he prayed, “His sweat was as it were great drops of blood falling upon the ground.” At the conclusion, Jesus accepts that the hour has come for him to be betrayed.

Matthias Stom or Matthias Stomer (1600 – 1652) was a Dutch golden age painter who was influenced by Caravaggio and his followers, and he is known for this mastery of chiaroscuro.

His work typically features religious scenes, and he is appreciated for the psychology in his compositions.

Other variants of his name are Matthias Stohom or Stomma, Matheo Schem, and Matteo Tomar. Stom spent most of his artistic life in Italy, mainly in Rome and Naples, and 200 of his works have been preserved.

Dutch Caravaggists refers to those Baroque artists influenced by the art of Caravaggio. They were active mostly in the Dutch city of Utrecht during the first part of the seventeenth century.

They left a legacy that influenced Rembrandt’s use of chiaroscuro.

Painters such as Matthias Stom were all in Rome in the 1610s when Caravaggio’s later style was very influential.

Back in Utrecht, they painted mythological and religious history subjects and genre scenes.

Utrecht was the most Catholic city in the United Provinces, still about 40% Catholic in the mid-17th century, and even more among the élite groups.

It had previously been the main center, after Haarlem, of Northern Mannerist painting in the Netherlands.

Christ on the Mount of Olives

Matthias Stom: A collection of paintings

A Tour of the Gemäldegalerie, Berlin

“The spirit is willing, but the flesh is weak.”
– Christ