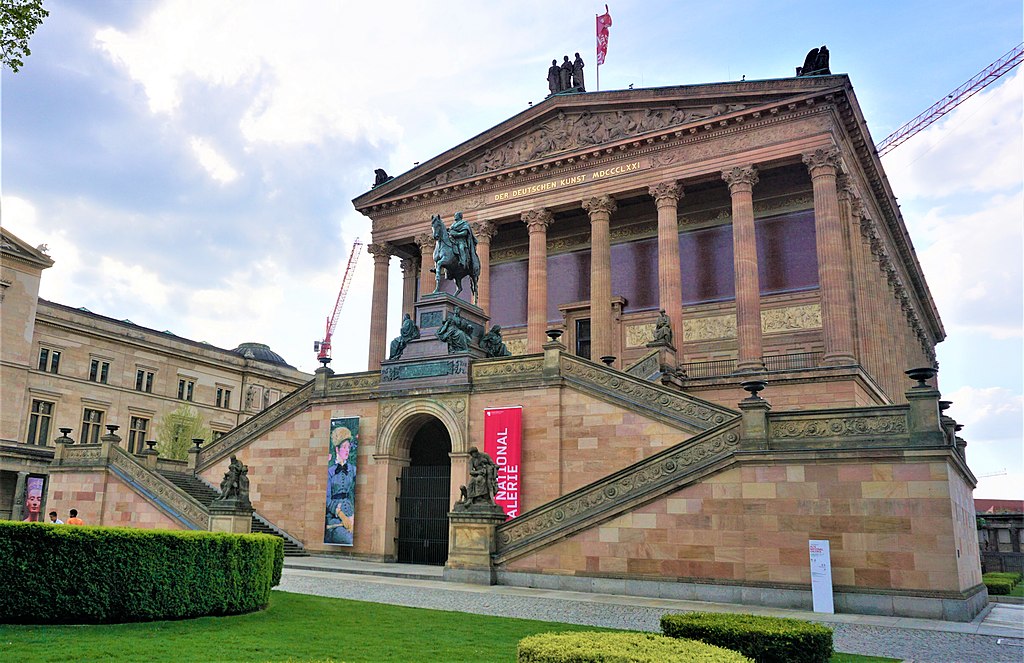 The National Gallery in Berlin is focused on Art of the 19th, 20th, and 21st centuries. Starting with the Alte Nationalgalerie, which opened in 1876, its exhibition space has expanded to include five other locations.

The museums are part of the Berlin State Museums, and the holdings of the National Gallery are exhibited across multiple locations.

“In Summer” by Pierre-Auguste Renoir

“In the Conservatory” by Édouard Manet

“In the Conservatory” by Édouard Manet is set in a greenhouse in Paris. It shows a fashionable couple of some social rank.

Their married status is conveyed by their rings and the proximity of their hands, which reflects a hint of intimacy.

The woman is the focus of the portrait, as she is more prominently placed plus her more colorful attire. Their lack of engagement with the viewer creates a sense of detachment.

“Moonrise by the Sea” by Caspar David Friedrich

“Moonrise by the Sea” by Caspar David Friedrich was painted in 1822, depicting a romantic seascape scene.

Three young people, two women side by side and a man further back, are sitting on a large boulder by the sea.

They are silhouetted against the sky as they watch the moon rising to the east above a band of clouds. In the distance are two sailing vessels, ghosting on a light breeze.

“Cromwell in Battle of Naseby” by Charles Landseer depicts Cromwell reading a letter from the King’s private papers that were found in Charles’s Cabinet, after the Battle of Naseby.

In this decisive battle, King Charles I lost the bulk of his veteran infantry and officers, all of his artillery and stores, his baggage, and many arms.

Captured in the baggage train were the King’s private papers, revealing to the fullest extent his attempts to draw Catholics and foreign mercenaries into the war.

“Frederick the Great Playing the Flute” at Sanssouci by Adolph Menzel

“Frederick the Great Playing the Flute at Sanssouci” by Adolph Menzel depicts the King of Prussia, a keen flutist, playing on the occasion of a visit from his sister.

The King is shown keeping time with his left foot and facing the chamber ensemble. Menzel has portrayed the scene, with great attention to the historical accuracy in the dress, musical instruments, and furnishings.

The concert room in Sanssouci is filled with the warm candlelight creating a theatrically atmospheric portrayal of Frederick the Great playing the flute at Sanssouci.

“Self-portrait with Death Playing the Fiddle” by Arnold Böcklin

“Self-portrait with Death Playing the Fiddle” by Arnold Böcklin depicts the artist standing while holding his paintbrush and palette. By his shoulder is a skeleton head with a hand playing the violin next to his ear.

Arnold Böcklin claimed that the personification of death in his self-portrait was an afterthought. According to the background story of this painting, Böcklin only painted in the figure of Death in response to his friends’ question, asking: “what he seemed to be listening to?”

Many artists’ self-portraits with a “memento more” have a long history in the arts. The inspiration for this figure of Death playing the fiddle had many influences for a well-traveled artist like Böcklin.

“Isle of the Dead” by Arnold Böcklin

“Isle of the Dead” by Arnold Böcklin depicts a desolate and rocky islet seen across an expanse of water. A small rowing boat is heading for the watergate and seawall on the island.

On the boat, an oarsman rows the boat from the stern. In the bow, facing the island is a standing figure clad in white. In front of the white figure, is a white, festooned coffin.

The center of the tiny island is dominated by a grove of tall, dark cypress trees, which are tightly hemmed in by cliffs.

Cypress trees are associated with cemeteries and mourning. Furthermore, the inner rock cliff faces appear to be tomb or interment portals.

“Nothing great in the world has ever been accomplished without passion.”
-Georg Wilhelm Friedrich Hegel

Photo Credit:  By Tine (This file was imported from Wikivoyage Shared.) [GFDL (gnu.org/copyleft/fdl.html) or CC BY-SA 3.0 (creativecommons.org/licenses/by-sa/3.0)], via Wikimedia Commons