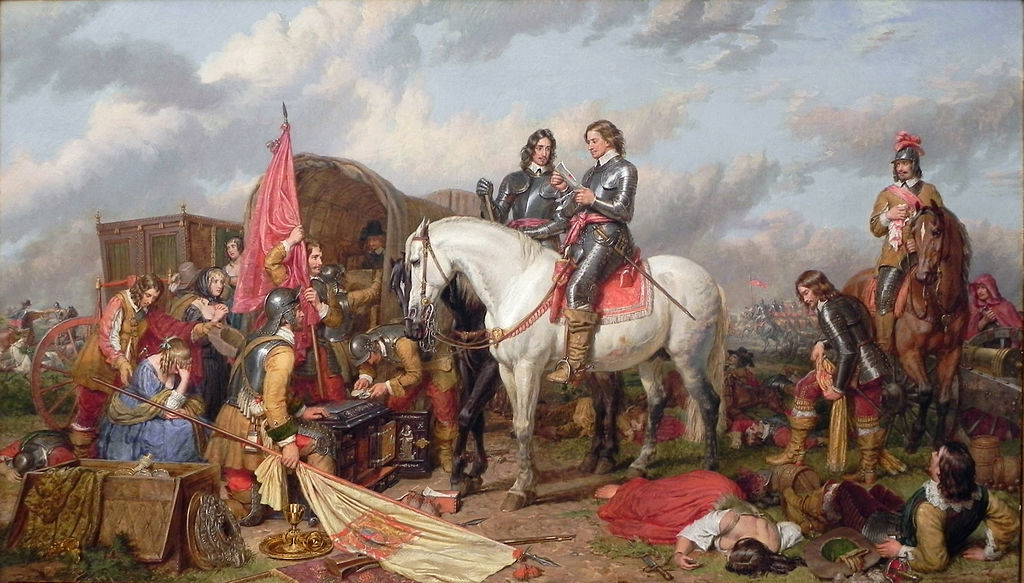 “Cromwell in Battle of Naseby” by Charles Landseer depicts Cromwell reading a letter from the King’s private papers that were found in Charles’s Cabinet, after the Battle of Naseby.

In this decisive battle, King Charles I lost the bulk of his veteran infantry and officers, all of his artillery and stores, his personal baggage, and many arms.

Captured in the baggage train were the King’s private papers, revealing to the fullest extent his attempts to draw Catholics and foreign mercenaries into the war.

The King’s correspondence showed he intended to seek support from the Irish Catholic Confederation and Catholic nations in Europe.

By publishing this correspondence, entitled “The King’s Cabinet Opened,” Parliament gained much support in favor of fighting the war to a finish. Within a year, the first civil war ended in a Parliamentarian military victory.

The Battle of Naseby was a decisive engagement during the First English Civil War, fought in 1645 between the Royalist army of King Charles I and the Parliamentarian New Model Army, commanded by Sir Thomas Fairfax and Oliver Cromwell.

It was fought near the village of Naseby in Northamptonshire.

After the Royalists stormed the Parliamentarian town of Leicester in 1645, Fairfax was ordered to lift his siege of Oxford, the Royalist capital, and engage the King’s main army.

Eager to bring the Royalists to battle, Fairfax set off in pursuit of the Royalist army, which was heading to recover the north.

The King, faced with retreating north or giving battle, decided to give battle, fearing a loss of morale if his army if he continued retreating.

After hard fighting, the Parliamentarian army had effectively destroyed the Royalist force, which suffered 7,000 casualties.

The King lacked the resources to create an army of such quality again, and after Naseby, it merely remained for the Parliamentarian armies to wipe out the last pockets of Royalist resistance. Within a year, Parliament had won the first civil war.

Charles Landseer (1799 – 1879) was an English painter, mostly on subjects from British history, or literature.

He paid close attention to the historical accuracy of the accessories and details in his paintings.

Cromwell in Battle of Naseby

The Battle of Naseby fought in the English Civil War

Battle of Naseby – The English Civil War, Royalists VS Parliamentarians

“Keep your faith in God, but keep your powder dry.”
– Oliver Cromwell