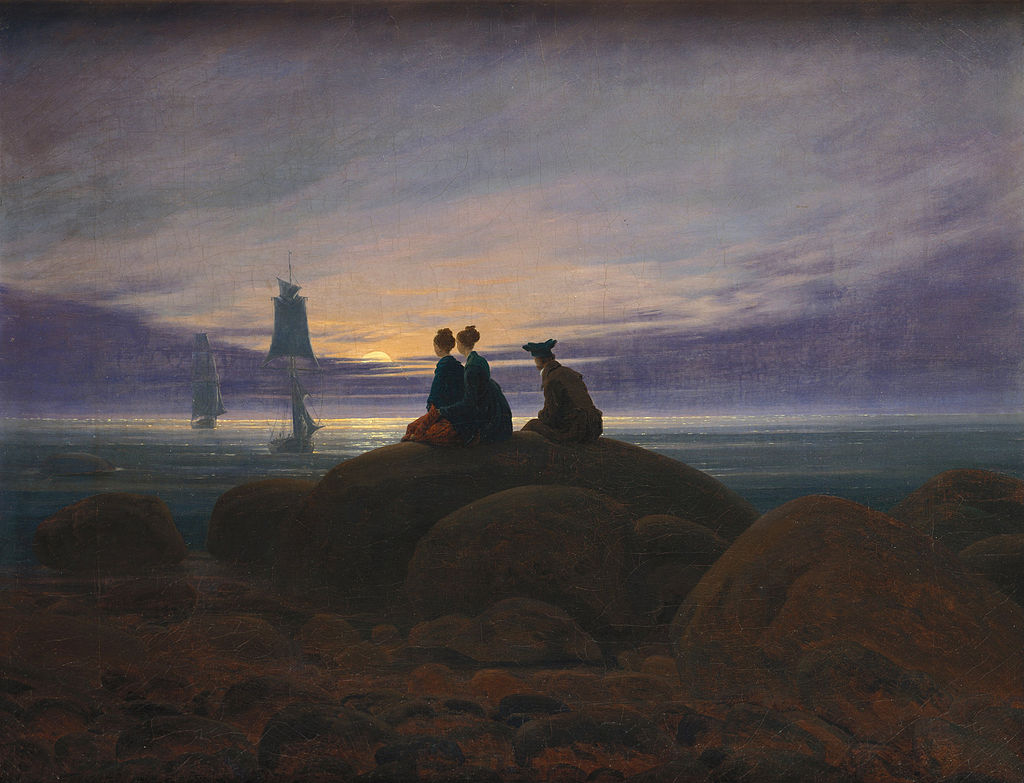 “Moonrise by the Sea” by Caspar David Friedrich

“Moonrise by the Sea” by Caspar David Friedrich was painted in 1822 depicting a romantic seascape scene. Three young people, two women side by side and a man further back, are sitting on a large boulder by the sea.

They are silhouetted against the sky as they watch the moon rising to the east above a band of clouds. In the distance are two sailing vessels, ghosting on a light breeze.

This painting is held in the Alte Nationalgalerie in Berlin, a similarly named painting by Friedrich is at the Hermitage Museum in St Petersburg with is much larger and painted in 1821.

Swedish Pomerania was a Dominion under the Swedish Crown from 1630 to 1815, situated on what is now the Baltic coast of Germany and Poland.

After multiple wars, disputes, and treaties, the Congress of Vienna it transferred to Prussia in 1815.

Caspar David Friedrich (1774 – 1840) was a 19th-century German Romantic landscape painter, generally considered the most important German artist of his generation. He is best known for his allegorical landscapes.

The rise of Nazism in the early 1930s saw a resurgence in Friedrich’s popularity. However, this was followed by a sharp decline as his paintings were, by association with the Nazi movement, interpreted as having a nationalistic aspect.

Fortunately in the late 1970s that Friedrich regained his reputation as an icon of the German Romantic movement and a painter of international importance.

Moonrise by the Sea

The Monk by the Sea

“The painter should paint not only what is in front of them, but also what they see inside themselves.”
– Caspar David Friedrich