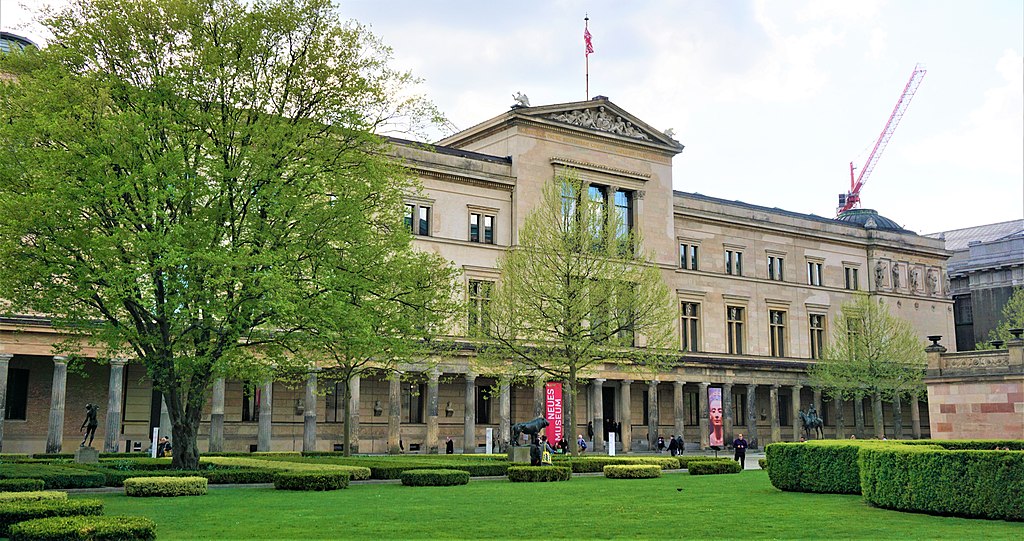 The Neues Museum, meaning “New Museum,” is one of the leading museums in Berlin, Germany, and is located to the north of the Altes Museum or “Old Museum” in an area called Museum Island.

It was built between 1843 and 1855 and was heavily damaged during the bombing of Berlin. Following the museum’s rebuilding, it reopened in 2009 and testifies the neoclassical architecture of museums in the 19th-century.

A Virtual Tour of the Neues Museum

Highlights of the Neues Museum

The “Nefertiti Bust” is the Neues Museum’s best-known masterpiece. Nefertiti was the Great Royal Wife of the Egyptian Pharaoh Akhenaten and Egypt’s Queen during 1370 B.C.-1330 B.C.

The “Standing Figure of Nefertiti” is a limestone sculpture of Queen Nefertiti, who was the Great Royal Wife of the Egyptian Pharaoh Akhenaten and Egypt’s Queen during 1370 B.C.-1330 B.C.

Dating from the year 1350 BC, the 40 cm high limestone statue is one of the outstanding surviving representations of the Queen, who has a unique role in the history of Ancient Egypt.

The figure was found broken and in multiple pieces. The statue pieces were discovered in 1920 during an excavation by the German Oriental Society in remains of the studio of Thutmose.

“Akhenaten and Nefertiti with their Children” is a small house shrine stele made of limestone. Akhenaton and Nefertiti are shown with the three of their daughters.

Nefertiti was the Great Royal Wife of the Egyptian Pharaoh Akhenaten. The body forms are depicted in relief, the overlong proportions, wide hips, thin legs, and the forwardly curved necks, are typical of the early Amarna artistic style.

Probably used as a home altar, this historic depiction provides a rare opportunity to view a scene from the private life of the king and queen.

The daughters are being held and caressed by their parents in the presence of their god Aten. Aten is in the center of the scene represented as a sun disc with sunrays ending in hands proffering ‘ank’-signs (life-signs) to the royal couple.

This “Relief Portrait of Akhenaten” depicts Pharaoh Akhenaten, previously known as Amenhotep IV, who was an Ancient Egyptian pharaoh of the 18th Dynasty.

The ‘excessive’ style at the beginning of the Amarna period is evident with this “Relief Portrait of Akhenaten.” The thin face, heavy narrow eyelids, slanting eyes, long, hanging chin, long nose, full lips, as well as the forwardly curved neck.

All of which is characteristic of the early representations of King Akhenaton. The skin folds that run from the side of the nose to the corners of the mouth.

Also, the folds on the neck are typical of the Amarna style. The artist has expertly captured the contrast of soft forms against the sharp contours of the face.

Priam’s Treasure Necklace is part of what became called the “Treasure of Priam” discovered in the ancient site of Troy, which is located in modern-day Turkey.

Ancient Troy was the setting of the Trojan War described in the Greek Epic Cycle, in particular in the Iliad, one of the epic poems by Homer.“

Priam’s Treasure” is a cache of gold and other artifacts discovered by Heinrich Schliemann in 1873.

This “Treasure from Troy” is part of what became called the “Treasure of Priam” discovered in the ancient site of Troy, which is in modern-day Turkey.

Ancient Troy was the setting of the Trojan War described in the Iliad, one of the epic poems by Homer. “Priam’s Treasure” was a cache of jewelry, gold, copper, terracotta and other ancient artifacts discovered by Heinrich Schliemann in 1873.

Strategies and seeing – Neues Museum, from ruin to Museum

“No price is too high to pay for the privilege of owning yourself.”
– Friedrich Nietzsche