“Akhenaten and Nefertiti with their Children” is a small house shrine stele made of limestone. Akhenaton and Nefertiti are shown with the three of their daughters.

Nefertiti was the Great Royal Wife of the Egyptian Pharaoh Akhenaten. The body forms are depicted in relief, the overlong proportions, wide hips, thin legs, and the forwardly curved necks, are typical of the early Amarna artistic style.

Probably used as a home altar, this historic depiction provides a rare opportunity to view a scene from the private life of the king and queen. The daughters are being held and caressed by their parents in the presence of their god Aten. A

ten is in the center of the scene represented as a sun disc with sunrays ending in hands proffering ‘ank’-signs (life-signs) to the royal couple.

Amenhotep IV not only changed his name from Amenhotep to Akhenaten, but he also turned the religion of ancient Egypt from polytheistic to monotheistic.

Pharaoh Akhenaten ruled for 17 years and died between 1336 – 1334 BC and is famous in history for abandoning traditional Egyptian polytheism and introducing an early form of monotheistic worship centered on the Aten.

However, as in past Egyptian religions, only through the intercession of Pharaoh Akhenaten and Queen Nefertiti could ordinary people partake in the divine salvation. 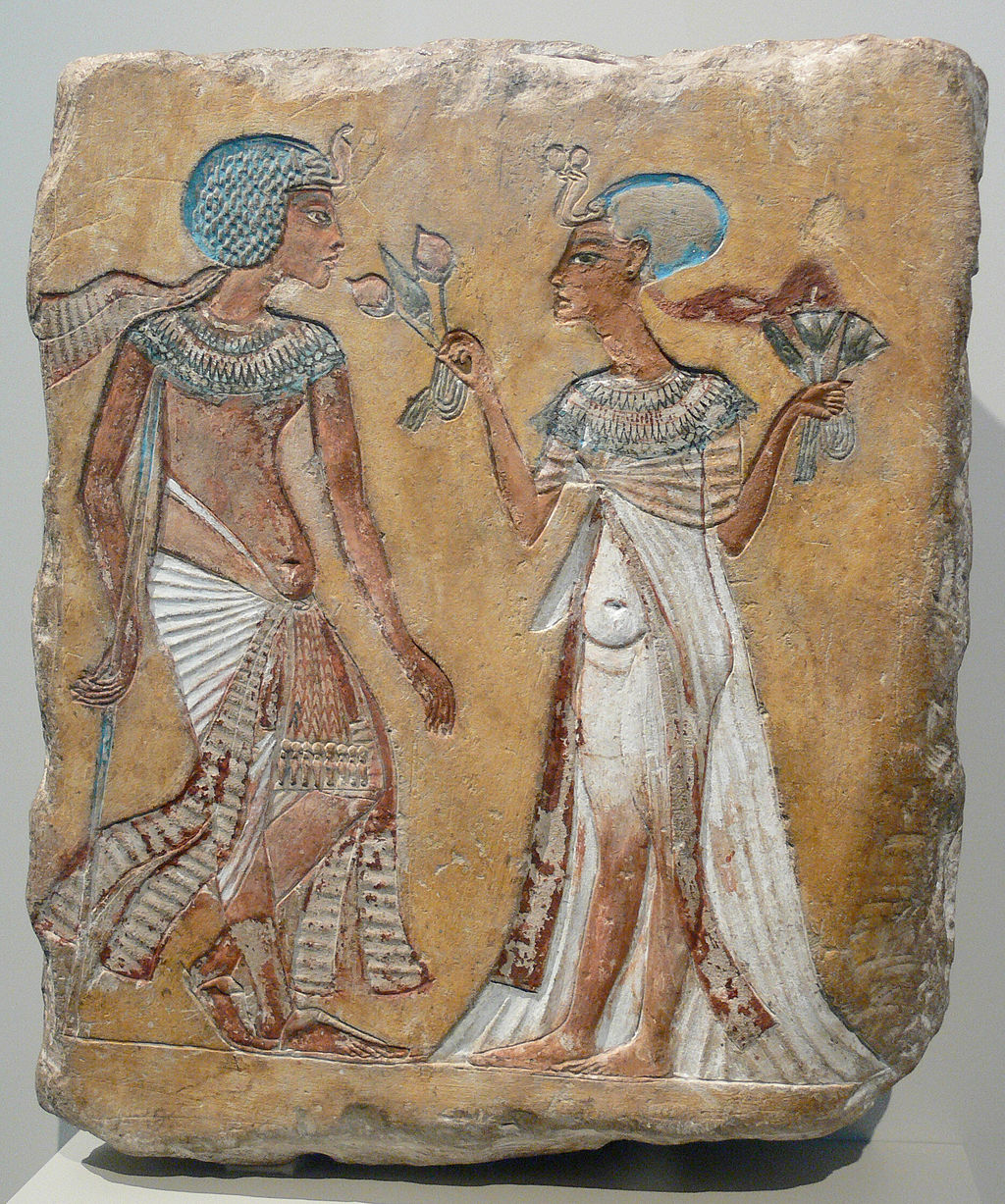 A relief of a royal couple in the Amarna style

As well as a new religion, the royal couple introduced a new art form. The Amarna period, roughly 1353-1336 BCE, launched a new kind of art that was revolutionary compared to the previously known and revered art form in the Egyptian culture.

This period challenged the norm of Egyptian society as Akhenaten choose to depict his reign in a vastly different and unique way from the rulers who came before him.

Before Akhenaten’s rise to the throne, Egyptian art was stagnant, focused heavily on permanence both of the object and the subject.

The family image during the Amarna period was more prevalent than other Ancient Egyptian periods. The Amarna family scenes are more intimate than those from the reign of any other pharaoh.

The family motif may have originated with the new religion. It was a way for Akhenaten and his family to set an example of piety to Aten for others in the court.

A sense of movement and activity characterizes the Amarna style during the Amarna Period in images. Figures have raised hands with figures overlapping and scenes that are busy and crowded.

The human body is portrayed differently with figures, always shown in profile on reliefs; they are slender with exaggerated legs and arms.

Depictions of figures represent feminine qualities such as large hips, prominent breasts, and rounded stomach and thighs. However, other pieces, such as the “Nefertiti Bust,” show much less apparent features of the Amarna style.

A Virtual Tour of Egyptian Art

Virtual Tour of Museums in Berlin

Nefertiti, Akhenaten, and their daughters

Akhenaten and the Amarna Style