The “Nefertiti Bust” represents the Great Royal Wife of the Egyptian Pharaoh Akhenaten and Egypt’s Queen during 1370 B.C. – 1330 B.C.

Akhenaten initiated a new monotheistic form of worship called Atenism dedicated to the Sun disc Aten. He was the first Pharaoh to adopt monotheism; however, it did not survive as the state religion after his death. 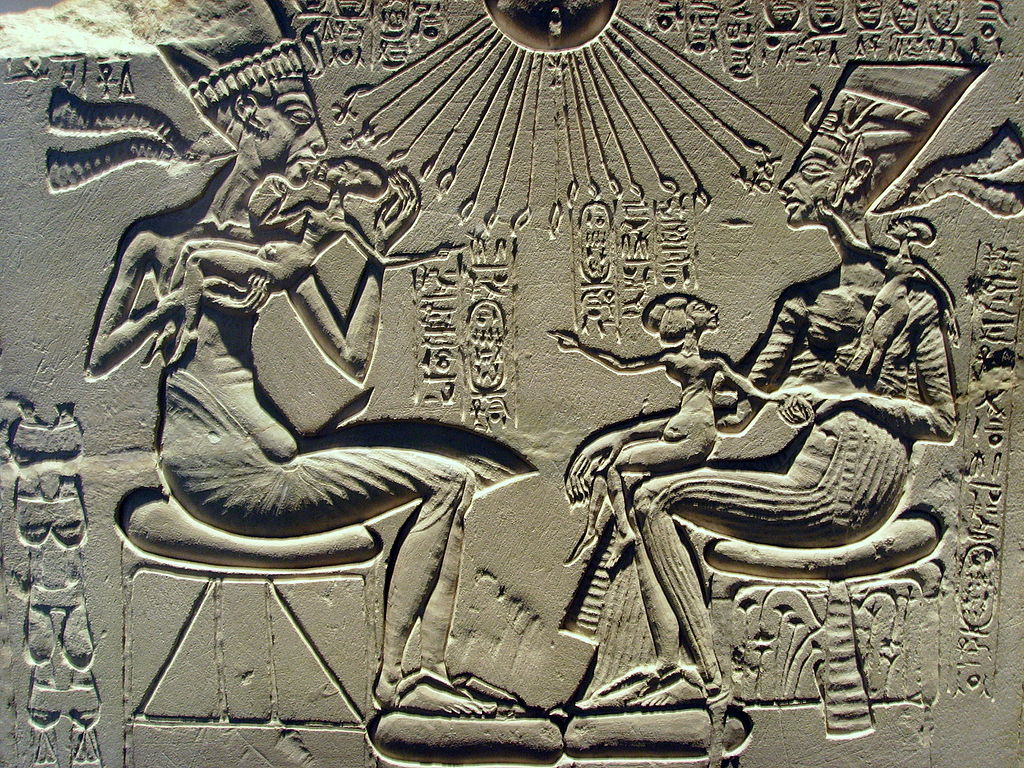 A “house altar” depicting Akhenaten, Nefertiti, and three of their daughters.

The bust served in the workshop of the Tuthmosis, as a model for artists producing portraits of the queen. Nefertiti is shown as a woman with a subtle beauty.

The folds under the eyes and chin and the slightly sunken cheeks do not diminish her beauty.

The bust is made of limestone, which is covered with modeled gypsum. The eye is inlaid with crystal, and the pupil is attached with black colored wax. The second eye-inlay was never completed.

The bust was discovered by German archaeologists in 1912 when they excavated the Thutmose’s workshop in Egypt.

The German expedition was digging under license at the time from the government in Egypt, which was ruled by the Ottoman Empire.

The “Nefertiti Bust” was brought to Berlin in 1913 just before World War I. During World War II, it was removed by the Nazi government to a secret place for safekeeping from the bombing of Berlin.

The Nefertiti Bust was discovered by the occupying American forces in a salt mine and put on display in West Berlin.

The “Nefertiti Bust” became a pawn in Cold War rivalries between the East and West. Many treasures that were found in East German Museums by the Soviets were shipped to the Soviet Union as the spoils of war in 1945-1946.

The “Nefertiti Bust” returned to Neues Museum after the Berlin Wall came down and after the museum’s restorations in 2009,  70 years after this masterpiece had been removed for its protection during the war.

The controversy continues, since 1925, Egypt has repeatedly asked Germany for its return. According to Egyptian authorities, the Germans took the Nefertiti statue in 1913 using fraudulent documents and deception.

Germany insists their ownership of Nefertiti is without a doubt, and Berlin’s Egyptian Museum curators maintain that even a brief loan may damage the bust.

Many world-leading museums insist that no one nation has an exclusive right to the legacy of the past. According to the German Culture Minister:

“There are artworks that belong to our collective consciousness — Nefertiti is such a work,”

The bust had become an issue of national identity for Berlin. In 1999, Nefertiti appeared on an election poster for a political party as a promise for a cosmopolitan and multicultural environment with the slogan “Strong Women for Berlin.”

In yet another example, the Nefertiti Bust has been used on a 1989 German stamp.

Some of the Amarna masterpieces that are part of the “Egyptian Museum of Berlin” collection that can be seen at the Neues Museum or the Altes Museum in the “Museum Island” museums include: