This “Treasure from Troy” is part of what became called the “Treasure of Priam” discovered in the ancient site of Troy, which is in modern-day Turkey.

Ancient Troy was the setting of the Trojan War described in the Iliad, one of the epic poems by Homer. “Priam’s Treasure” was a cache of jewelry, gold, copper, terracotta and other ancient artifacts discovered by Heinrich Schliemann in 1873.

Schliemann claimed the site to be that of ancient Troy and therefore assigned the artifacts to the King Priam of Troy, from Homeric.

At that time, archaeology was in its infancy, and the stratigraphy at Troy had not been scientifically undertaken.

Following Schliemann’s discoveries, the layer in which “Priam’s Treasure” was alleged to have been found, has been historically assessed and assigned to an earlier period of Troy.

Schliemann’s finds pre-dated Priam the King of Troy, of Trojan War fame, by hundreds of years.

Many experts believe that the treasures are a thousand years older than Homer’s King Priam of Troy, who died about 1200 B.C. The artifacts discovered at ancient Troy are now spread across multiple museums including:

The stories of Heinrich Schliemann’s discoveries are now famous and controversial.

During 1871-73 and then 1878–79, Schliemann excavated a hill called Hissarlik in the Ottoman Empire, near the town of Chanak (Çanakkale) in north-western Anatolia, Turkey.

Heinrich Schliemann declared one of these cities to be Troy, and this declaration was widely accepted at that time and publicized in the global press. Schliemann reported the discovery as follows:

“In excavating this wall further and directly by the side of the palace of King Priam, I came upon a large copper article of the most remarkable form, which attracted my attention all the more as I thought I saw gold behind it. … To withdraw the treasure from the greed of my workmen, and to save it for archaeology, … I immediately had lunch break called. … While the men were eating and resting, I cut out the Treasure with a large knife…. It would, however, have been impossible for me to have removed the Treasure without the help of my dear wife, who stood by me ready to pack the things which I cut out in her shawl and to carry them away.”

Later, archaeologists condemned Schliemann’s excavations as having destroyed the first layers of the real Troy.

It is claimed that Schliemann’s excavations were carried out with such haste and non-archaeological methods that “he did to Troy what the Greeks couldn’t do in their time.” Other scholars agree that the damage caused to the site is irreparable. 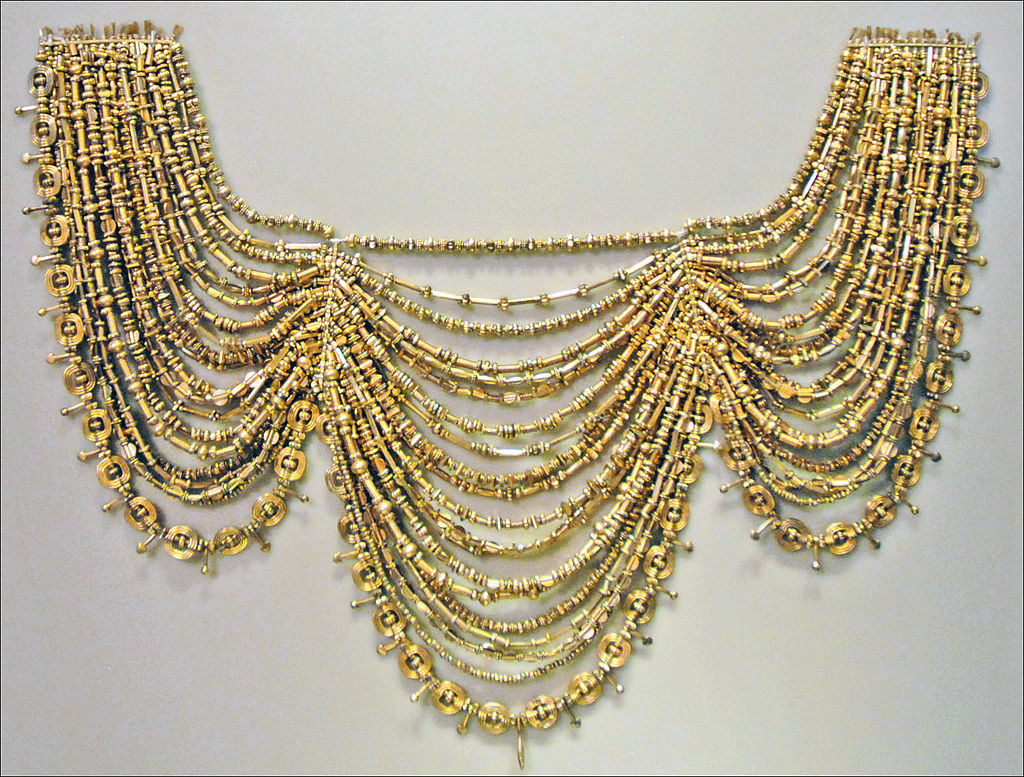 Part of Priam’s treasure discovered at the Trojan site in 1873. The jewels are dated from an earlier period to the Trojan War.

Troy was an ancient city in the northwest of the region known in late Classical antiquity as Asia Minor, now known as Anatolia in modern Turkey, close to the Dardanelles Strait.

It was the setting of the Trojan War described in the Iliad, attributed to Homer. Ancient Greek historians placed the Trojan War between the 12th to 14th centuries BC.

Modern archaeologists associate Homeric Troy with an archaeological layer of Troy, which spans from c. 1300 to c. 950 BC. This period coincides with the collapse of the Bronze Age.

Troy was a walled city with fortified towers reaching a height of 9 meters (30 ft); the foundations of one of its towers measured 18 meters by 18 meters (59 ft).

Archaeologists estimated the area of Homeric Troy at 200,000 square meters (50 acres) or more and put its population at five to ten thousand inhabitants, which makes it by the standards of its day a large city.

Heinrich Schliemann (1822 – 1890) was a German businessman and a pioneer in early archaeology. He was an advocate of the historical truth of places mentioned in the works of Homer.

He led archaeological excavations of Hisarlik, the site of Troy, along with the Mycenaean sites in Greece. His work lent weight to the idea that Homer’s Iliad reflects historical events.

Schliemann’s excavation of nine levels of archaeological remains with dynamite has been criticized as destructive of significant historical artifacts, including the level that is believed to be the ancient Troy.

A Tour of the Neues Museum

Archaeological Discoveries About The Ancient Trojans

How and why the Trojan war started

“Everything is more beautiful because we are doomed. You will never be lovelier than you are now. We will never be here again.”
– Homer, The Iliad