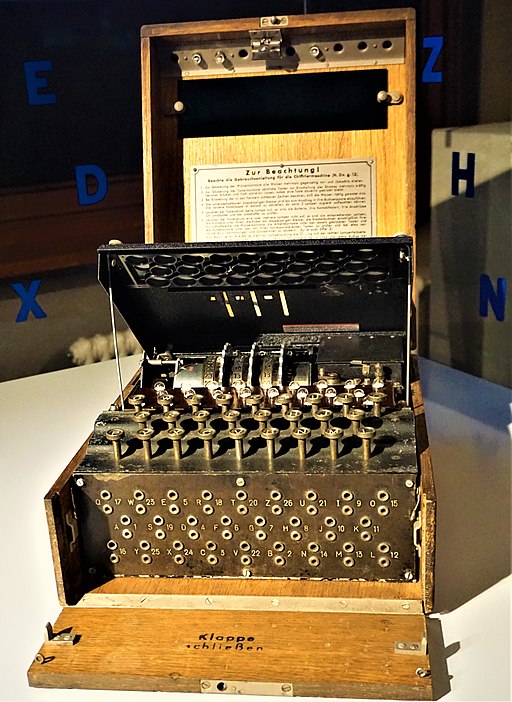 The Enigma machines are a series of cipher machines developed and used in the early- to mid-20th century to protect commercial, diplomatic, and military communication.

Enigma was invented by a German engineer at the end of World War  Early models were used commercially and were adopted by military and government services of several countries, most notably Nazi Germany during World War II.

The Military Enigma machines were a family of portable cipher machines with rotor scramblers. Good operating procedures, properly enforced, would have made the plugboard Enigma machine unbreakable.

However, most of the German military forces, secret services, and civilian agencies that used Enigma employed inadequate operating procedures.

It was these poor procedures that allowed the Enigma machines to be reverse-engineered and the ciphers to be read.

Several different Enigma models were produced, but this German military model with a plugboard was the most complex and challenging to decipher.

In 1938, the Germans added complexity to the Enigma machines by adding more rotors. Up to this point, the Polish Cipher Bureau had been the most successful in deciphering earlier units.

However, with the increasing complexity, the Poles initiated French and British military intelligence representatives into their Enigma-decryption techniques and equipment.

The Polish demonstrations spawned the later British continuation and effort to crack the Nazi Enigma Machines. During the war, British cryptologists decrypted a vast number of messages enciphered on Enigma.

The intelligence gleaned from this source, codenamed “Ultra” by the British, was a substantial aid to the Allied war effort.

Cryptanalysis of the Enigma ciphering system enabled the western Allies in World War II to read substantial amounts of coded radio communications of the Axis powers.

The military intelligence, which, along with other decrypted Axis radio and teleprinter transmissions, was given the codename Ultra. Ultra was considered by Dwight D. Eisenhower to have been “decisive” to the Allied victory.

It was German procedural flaws, operator mistakes, failure to introduce changes in encipherment procedures, plus the Allied capture of key tables and hardware that enabled Allied cryptologists to succeed.

The effort to break the Enigma was not disclosed until the 1970s. Since then, interest in the Enigma machine has grown.

Enigmas are on public display in museums around the world, and several are in the hands of private collectors and computer history enthusiasts.

The British Government Code and Cypher School at Bletchley Park built up an extensive cryptanalytic capability.

Alan Turing, a Cambridge University mathematician and logician, provided much of the original thinking that led to the design of the cryptanalytical machines that were instrumental in breaking the Enigma.

A bombe was an electro-mechanical device used by Polish and British cryptologists to help decipher German Enigma-machine-encrypted secret messages during World War II.

The British bombe was an electromechanical device designed by Alan Turing soon after he arrived at Bletchley Park in 1939.

By 1945, almost all German Enigma traffic could be decrypted within a day or two, yet the Germans remained confident of its security.

The Nazis openly discussed their plans and movements, handing the Allies vast amounts of information. After the war, the allies learned that the German cryptographers knew Enigma was breakable.

However, they could not imagine that the allies could have mustered all the resources in time to do it.

The German Command had been advised that a cryptanalytic attack was the least likely of all security problems. The Nazis had underestimated their enemy.

Bletchley Park is a 19th-century mansion and estate in Buckinghamshire that became the principal center of Allied code-breaking during the Second World War.

GC&CS penetrated the secret communications of the Axis Powers, most importantly the German Enigma. The nature of the work there was a secret until many years after the war.

According to historians, the “Ultra” intelligence produced at Bletchley shortened the war by two to four years, and without it, the outcome of the war would have been uncertain.

Codebreaking operations at Bletchley Park came to an end in 1946, and all information about the wartime operations was classified until the mid-1970s.

Today, Bletchley Park has been open to the public and houses exhibits and rebuilt huts as they would have appeared during their wartime operations.

At the separate National Museum of Computing, is a rebuilt Colossus computer. The Colossus was the world’s first programmable digital electronic computer.

“Unless in communicating with it, one says exactly what one means, trouble is bound to result.”

“Sometimes, it is the people no one imagines anything of who do the things that no one can imagine.”

“A very large part of space-time must be investigated if reliable results are to be obtained.”

The original question, ‘Can machines think?’ I believe to be too meaningless to deserve discussion.

“We can only see a short distance ahead, but we can see plenty there that needs to be done.”

“A computer would deserve to be called intelligent if it could deceive a human into believing that it was human.”

“The idea behind digital computers may be explained by saying that these machines are intended to carry out any operations which could be done by a human computer.”

“Science is a differential equation. Religion is a boundary condition.”

“Mathematical reasoning may be regarded rather schematically as the exercise of a combination of two facilities, which we may call intuition and ingenuity.”

“I have had a dream indicating rather clearly that I am on the way to being hetero, though I don’t accept it with much enthusiasm either awake or in the dreams.”

“I have such a stressful job that the only way I can get it out of my mind is by running hard.”

“I want a permanent relationship, and I might feel inclined to reject anything which of its nature could not be permanent.”

“Do you know why people like violence? It is because it feels good. Humans find violence deeply satisfying. But remove the satisfaction, and the act becomes hollow.”

“Machines take me by surprise with great frequency.”

How Was Hitler’s Enigma Machine Cracked?

The Inner Workings of an Enigma Machine

“Nothing great in the world has ever been accomplished without passion.”
– Alan Turing

Photo Credit:  By Tine (This file was imported from Wikivoyage Shared.) [GFDL (http://www.gnu.org/copyleft/fdl.html) or CC BY-SA 3.0 (https://creativecommons.org/licenses/by-sa/3.0)], via Wikimedia Commons