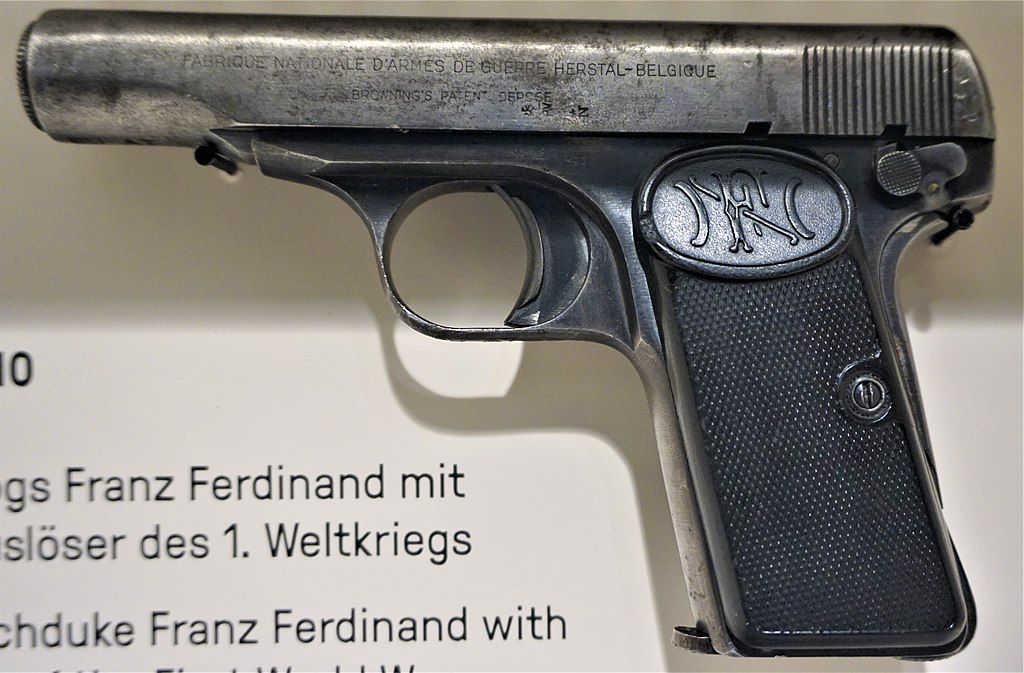 The FN Browning Model 1910 is a semi-automatic pistol designed by John Browning and manufactured by Fabrique Nationale of Belgium. Introduced in 1910, this pistol used a unique operating spring location surrounding the barrel.

This location became the standard in such future weapons as the Walther PPK and Russian Makarov.

While the Model 1910 was widely sold to both civilian and military markets, it was explicitly considered a military and police pistol.

It was popular in the Spy Services and was used for a number of assassinations.

An FN M1910 was the handgun used to assassinate Archduke Franz Ferdinand of Austria in Sarajevo in1914, the act that precipitated the First World War.

During the world wars, the FN 1910 was used by the militaries of Belgium, the Netherlands, France, Finland, Japan, and Peru and Venezuela postwar.

The Assassination which started World War I

On 28 June 1914, Franz Ferdinand and his wife were assassinated in Sarajevo, the capital of the Austro-Hungarian province of Bosnia and Herzegovina.

The perpetrator was a 19-year-old member of Young Bosnia and one of a group of assassins.

Earlier in the day, the Royal couple had been attacked with a grenade at their car. However, the bomb detonated behind them, injuring the occupants in the following vehicle.

After a short rest at the Governor’s residence, the royal couple insisted on seeing all those who had been injured by the bomb at the local hospital.

As the cars backed down the street and onto a side street, the line of cars stalled. At this same time, the assassin was sitting at a cafe across the street.

He instantly seized his opportunity and walked across the street and shot the royal couple.

The Assasins’s weapon was the pocket-sized FN Model 1910 pistol chambered for the .380 ACP cartridge provided him by a Serbian Army Colonel and member of the Black Hand.

“Nothing great in the world has ever been accomplished without passion.”
– Alan Turing

Photo Credit:  By Tine (This file was imported from Wikivoyage Shared.) [GFDL (http://www.gnu.org/copyleft/fdl.html) or CC BY-SA 3.0 (https://creativecommons.org/licenses/by-sa/3.0)], via Wikimedia Commons