The Pergamon Museum is located on “Museum Island” in Berlin, Germany. The museum is famous for housing large monumental historic Babylonian, Greek and Roman buildings such as the Ishtar Gate of Babylon, the Pergamon Altar and the Market Gate of Miletus.

Pergamon Museum has three separate museums: the Collection of Classical Antiquities, the Museum of the Ancient Near East, and the Museum of Islamic Art.

The Pergamon Museum was built between 1910 and 1930 and is named after one of its key attractions, The Pergamon Altar.

It was created to complement the nearby Kaiser-Wilhelm Museum, now the Bode Museum, on what is known as Museum Island.

The museum’s early history was impacted by turbulent periods of war, depression, political upheaval and was damaged in the bombing of Berlin during World War II.

After the end of World War II, some of the original collection was taken by the Russians as war reparations.

They displayed or stored at the Hermitage and the Pushkin Museums. Many of the museum’s artifacts were returned in the late 1950s. However, some of the treasures remain in Russia.

Note that over the next few years, the Pergamon Museum and other Museums on Museum Island, Berlin, maybe partly closed for significant upgrades to the site and museum buildings as part of a master plan for the entire Unesco World Heritage Site.

A Virtual Tour of the Pergamon Museum

The Pergamon Altar was built about 150 BC on the Acropolis or the high point of the ancient Greek city of Pergamon in Asia Minor.

This large Altar of Zeus at Pergamon, near modern-day Izmir, Turkey, is a monumental work of Greek Hellenistic art. Built during the reign of Greek King Eumenes II, the structure is over 35 meters wide and 33 meters deep.

The front stairway is almost 20 meters wide. Like the Parthenon in Athens, this Zeus Altar constructed on a terrace of the Acropolis overlooking the ancient city of Pergamon.

The gate was integral to the ancient Walls of Babylon and was considered one of the original Seven Wonders of the World.

When a Greek poet of the 2nd Century BC compiled the seven wonders of the ancient world, only one city could claim two world wonders, and that was Babylon. Babylon was the home of the Hanging Gardens and Babylon’s city wall with Ishtar Gate.

This rectangular quartz frit tile is from Iran and was created in the 13th – 14th Century. The relief shows a hunting scene, and between the two galloping riders is a deer.

The riders have a golden halo surrounding their heads. The hunter on the right holds the reins in his right hand and a sword in his left.

The rider on the left is turning backward, holds the bow and arrow in his hands, and aims at the deer.

This Lion Hunting Scene from about 750 BC was created in the Kingdom of Sam’ al, which was in the southern and eastern of modern-day Turkey.

The proportions and details of the people and equipment, the wagon arming, the horse armor, the drawstring, the internal drawing of the lion, and the perspective do not match the quality from imperial cities.

This cast copper alloy astrolabe with engraved decorations had many uses, including the determination of Qibla, the direction of prayer to Mecca.

To use the device, it had to be hung up and aligned. Depending on the task, different discs were inserted for different uses.

This specific Astrolabe lists the coordinates of 86 locations between Morocco and China, the zodiac, and the names of 49 fixed stars.

A Prayer Niche in Arabic is called a miḥrāb and indicates the direction of prayer to Mecca. This prayer niche comes from Kashan, Iran, and corresponds to the flat type characteristic of medieval Iran, only the columns appear semi-plastic.

This miḥrāb consists of 74 individual tiles, which were embossed with molds, painted, and glazed.

Large blue inscriptions and patterns, as well as small turquoise fillings, stand out from the dominant chandelier pattern, which shimmers in different golden brown tones.

The blue clours were applied on the glaze, the luster painted on the finished glaze was added in a subsequent firing of the tiles.

The second battle of 671 BC saw Taharqa retreat with his army to Memphis. Memphis was taken by Esarhaddon, forcing Taharqa to flee to Kush.

After his victory, Esarhaddon “slaughtered the villagers and erected piles of their heads.”

The Desert Place of Mshatta Facade

The Mshatta Facade is the decorated part of the façade of the 8th century, Umayyad residential palace of Qasr Mshatta, which was one of the Desert Castles of Jordan.

The Mshatta Facade is a monument of early Islamic art and architecture, demonstrating early forms of the arabesque, millefleur, and animals carved in relief.

The decoration on the left side of the facade has many animals among the foliar forms. On the right of the entranceway in the center, there are no animals.

This Water Basin from 700 BC was carved from one monolithic block but was discovered completely fragmented in one of the courtyards of the Temple of Assur.

It was reconstructed using many of its original components and reliefs. It was a solid basalt tub from one of the gardens outside the Temple of Ishtar at Assur.

The Water Basin was destroyed during the Fall of Assur in 614 BC when the first city and the old capital of the Neo-Assyrian Empire fell to Median forces.

The sack of the city that followed the fall utterly destroyed the city. Assur would never recover from the destruction. Thus this water basin lasted less than 100 years.

This mosaic floor is called the Orpheus Mosaic and was formerly part of a dining room of a Roman private house in Miletus, in Asia Minor.

Orpheus mosaics are found throughout the Roman Empire, generally in large Roman villas. Orpheus was a popular subject in classical art and was also used in Early Christian art as a symbol for Christ.

Titles such as Orpheus Charming or Taming the Beasts are used to describe these mosaics.

Usually, the scene occupies the same space, but sometimes as in this example, Orpheus and the animals are each in compartments separated by borders with geometrical decoration.

The King once again aims an arrow at the lion, which has turned its head back and seems to roar its attacker in pain.

This small patterned Holbein knotted carpet from the 16th century belongs to a group of carpets with a similar pattern, which is named after the Renaissance painter Hans Holbein the Younger (1497-1543), as they often appear in his paintings.

There is also a separate group of large patterned Holbein carpets. The field patterning of this small-patterned “Holbein” carpets consists of braided-band octagons arranged diagonally, combined with rhombic shapes arranged offset to the octagons. 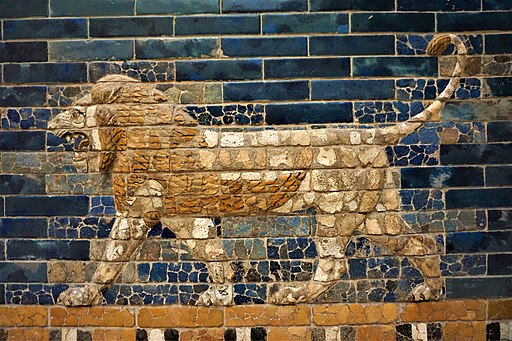 The Ishtar Gate Processional Way is a red and yellow brick-paved corridor, which was initially over half a mile long with walls on each side, over 15 meters tall.

The walls were decorated with over 120 images of lions, bulls, dragons, and flowers, made from enameled blue, yellow, and brown tiles.

It was this processional way that led to the temple of Marduk, which was in the form of a ziggurat. 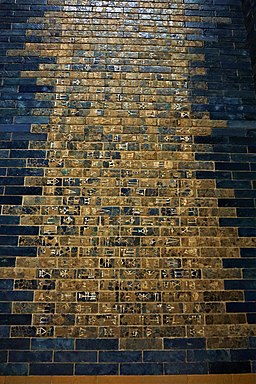 Building inscription of Nebuchadnezzar II at the gate

The text of the inscription reads: “I Nebuchadnezzar laid the foundation of the gates down to the groundwater level and had them built out of pure bluestone.

Upon the walls in the inner room of the gate are bulls and dragons, and thus, I magnificently adorned them with luxurious splendor for all humanity to behold in awe.” 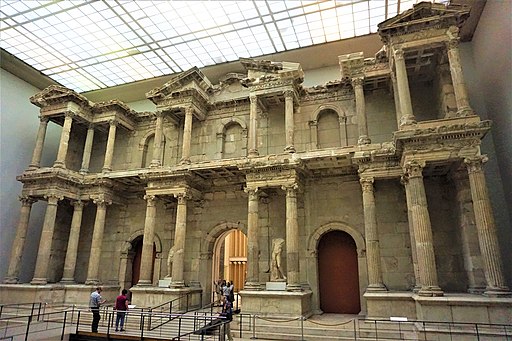 Map for the Pergamon Museum

A visit to the Pergamon museum in Berlin