The Pergamon Altar was built about 150 BC on the acropolis or the high point of the ancient Greek city of Pergamon in Asia Minor.

This colossal Altar of Zeus at Pergamon, near modern-day Izmir, Turkey, is a monumental work of Greek Hellenistic art.

Built during the reign of Greek King Eumenes II, the structure is over 35 meters wide and 33 meters deep. The front stairway is almost 20 meters wide.

Like the Parthenon in Athens, this Zeus Altar constructed on a terrace of the acropolis overlooking the ancient city of Pergamon.

The altar base is decorated with a high frieze in high relief showing the battle between the Giants and the Olympian gods. Called the Gigantomachy frieze, it shows Gaia pleading with Athena to spare her son.

Athena and Nike are fighting with Alkyoneus, Gaia is shown rising from the ground. Greek Hellenistic art (323-27 BCE) was less about the harmony and serenity of classical Greek art, and more about achieving excitement, wild movement, and strong feelings.

These images on the Pergamon Altar carved in such high relief that they seem almost detached from the background.

The Gigantomachy frieze is made up of over 100 panels showing gods in combat with giants, and it is a leading example of Hellenistic sculpture filled with action, emotion, and movement.

The story derives from Greek legend. After the new gods led by Zeus, with the support of the goddess Gaia, had overcome the old gods led by Cronus, Zeus then decided to overcome Gaia’s children.

There is also a high relief frieze on the inner court walls which surround the fire altar at the top of the stairs. This frieze is less well-preserved and depicts events from the life of the legendary founder of the city of Pergamon.

The original place of the Pergamon Altar was near Izmir, a city on Turkey’s Aegean coast. In classical antiquity, the town was known as Smyrna (Greek: Σμύρνη Smyrni), a name which remained in use until renamed by Turkey in 1930.

The modern name “İzmir” is the Turkish rendering of the original Greek name “Smyrna.”

The Greeks founded it, rebuilt by Alexander the Great, conquered by the Roman Empire, became part of the Byzantine empire, and then becoming part of the Ottoman Empire in the 15th century.

In the 7th century, during a period of conflict, the buildings on the Pergamon Acropolis, including the Zeus Altar, were partly dismantled by Christians to recycle the stone for defense works.

In 716, the city was overrun by the Arab forces and then abandoned. Resettled in the 12th century, it was later occupied by the Turks and became part of the Ottoman Empire.

The Prussian engineer Carl Humann (1839-96) first visited Pergamon in 1864, returning many times during the following years for further investigations.

He advocated for the preservation of the antiquities on the city’s acropolis, which was being used as a quarry by local inhabitants.

The German Empire subsidized the excavation in 1878, and Carl Humann began official excavations on the acropolis of Pergamon, an effort that lasted until 1886.

The Turkish government, which was seeking an alliance with Germany, agreed that all frieze fragments found during this period would become the property of the Berlin museums. 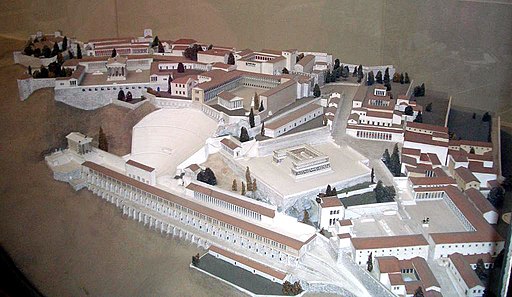 A model of the acropolis of the ancient Greek city of Pergamon, as it would have been in the 2nd century AD. The model of the Pergamon Altar on the extensive white area in the model.

After all the excavated fragments arrived in Berlin, Italian experts reassembled the frieze from the thousands of pieces.

After a long series of delays such as World War I and the following Depression, a brand-new Pergamon Museum was opened in 1930 to display the Pergamon Altar.

After the end of World War II, the Soviets took parts of the Pergamon Altar to Leningrad in 1948 as war reparations. The Altar was later returned to Berlin in 1958.

There are various references to the Pergamon Altar in ancient texts. The most famous is where it has been called the “Throne of Satan” due to this reference in the Bible:

The Pergamon Altar is today the most famous masterpiece in the Berlin Collection of Antiquities, which is on display in the Pergamon Museum.

The original site of the Pergamon Altar – the Ancient Greek city of Pergamon, in modern-day Turkey

A Tour of the Pergamon Museum

The Pergamon Museum in Berlin

“History is written by the victors.”
– Walter Benjamin