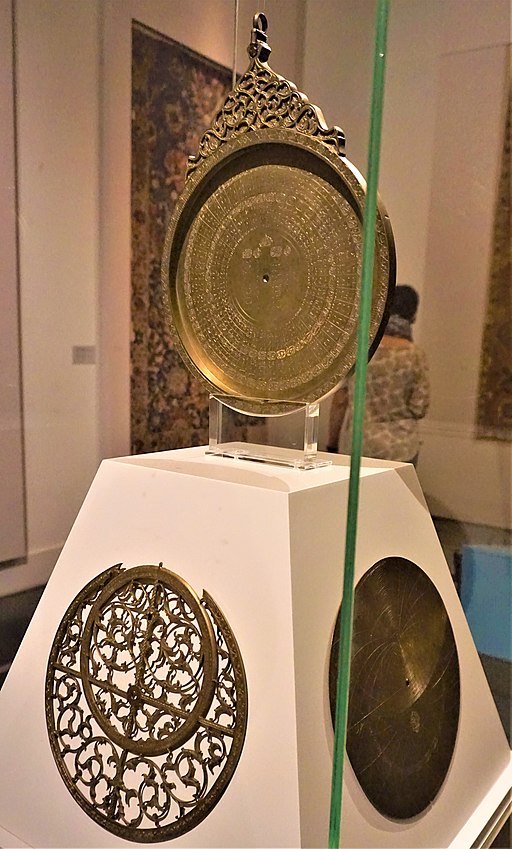 This cast copper alloy astrolabe with engraved decorations had many uses, including the determination of Qibla, the direction of prayer to Mecca. To use this device, it had to be hung up and aligned.

Depending on the task, different discs were inserted for different uses. This specific Astrolabe lists the coordinates of 86 locations between Morocco and China, the zodiac, and the names of 49 fixed stars.

The suspension apparatus of this astrolabe is richly decorated with symmetrical tendril decoration. The main body of the astrolabe consists of a disk, called the mater (mother), which is thick enough to hold one or more flat plates.

The Mater of this astrolabe bears the signature of the master Muhammad Zaman al-munadschim al-asturlabi on the back.

An astrolabe was used by astronomers and navigators to measure the altitude above the horizon of a celestial body, day or night.

It was used to identify stars or planets, to determine local latitude given local time and vice versa, to survey, or to triangulate.

Astrolabe technologies were used in classical antiquity, the Islamic Golden Age, the European Middle Ages, and the Age of Discovery for all these purposes.

The astrolabe’s importance not only comes from the early development of astronomy but is also useful for determining latitude on land or calm seas.

Although it is less reliable on the heaving deck of a ship in rough seas, the mariner’s astrolabe was developed to solve that problem.

The early astrolabes were invented in the Hellenistic civilization and continued to be used in the Greek-speaking world throughout the Byzantine period.

Metal astrolabes were known in the Christian East well before they were developed in the Islamic world or the Latin West.

Astrolabes were further developed in the medieval Islamic world, where Muslim astronomers introduced angular scales to the design, adding circles indicating azimuths on the horizon.

It was widely used throughout the Muslim world, chiefly as an aid to navigation and as a way of finding the Qibla, the direction of Mecca.

In the Islamic world, astrolabes were used to find the times of sunrise and the rising of fixed stars, to help schedule morning prayers (salat).

The spherical astrolabe was a variation of both the astrolabe and the armillary sphere. It was invented during the Middle Ages by astronomers and inventors in the Islamic world.

How to use an astrolabe

The Astrolabe – Its History & Application

How to Use an Astrolabe

What is an Astrolabe – Introduction