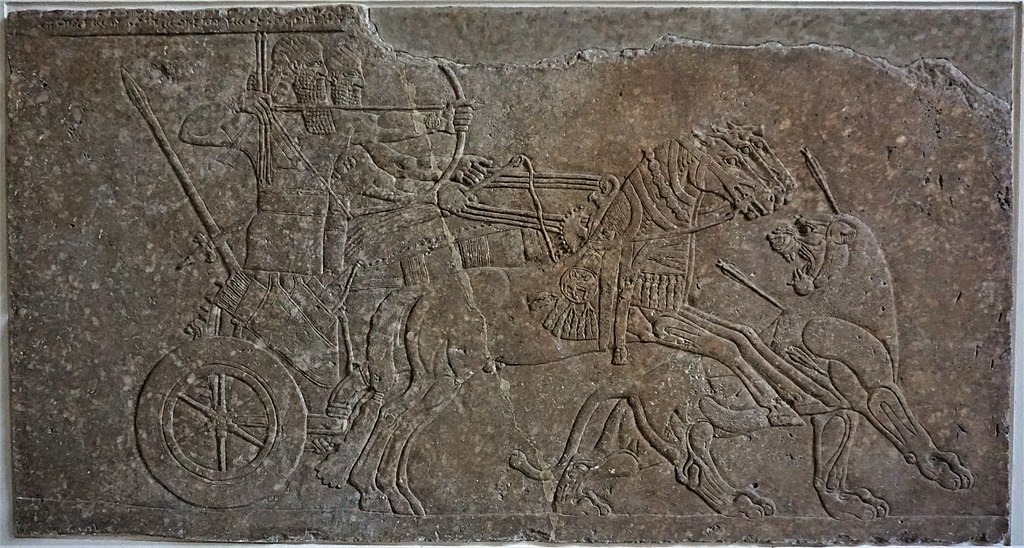 The King once again aims an arrow at the lion. The lion has turned its head back and seems to roar its attacker in pain.

The royal lion hunt is a symbol of the King overcoming the dangers and challenges to the Assyrian state by its ruler.

Particularly noteworthy is in the initially colored bas-relief of detail, such as in hunting chariots and weapons, as well as in the richly decorated horses with their teeth.

This section of the relief is only the lower part of a three-walled wall relief, the total height of which was about 2.30 m.

While the upper register with another narrative relief is lost, only a few remnants of two lines of cuneiform have been preserved from the middle register, which bore the king’s standard inscription.

An almost identical representation, now in the British Museum in London, shows the bow-shooting king, who has just killed a male lion.

Nimrud has been one of the primary sources of Assyrian sculpture, including the famous palace reliefs.

A series of the distinctive Assyrian shallow reliefs were removed from the palaces, and sections are now found in several museums, in particular, the British Museum and the Pergamon Museums.

These show scenes of hunting, warfare, ritual, and processions.

There are about two dozen sets of scenes of lion hunting in surviving Assyrian palace reliefs.

Neo-Assyrian palaces were very extensively decorated with such reliefs, carved in shallow reliefs on slabs that are mostly of gypsum alabaster, which was plentiful in northern Iraq.

Other animals were also shown being hunted, and the main subject for narrative reliefs was the war campaigns of the king who built the palace. Other reliefs showed the king, his court, and “winged genie” and lamassu protective minor deities.

Nimrud is an ancient Assyrian city located 30 kilometers (20 mi) south of the city of Mosul, in the Nineveh plains in Upper Mesopotamia.

It was a major Assyrian city between about 1350 BC and 610 BC. The city is located in strategic position north of the point that the river Tigris meets its tributary, the Great Zab.

In the mid 19th century, biblical archaeologists proposed the Biblical name of Kalhu (Calah), based on a description in Genesis 10.

He built a large palace and temples in the city, which fell into disrepair during the Bronze Age Collapse of the mid-11th to mid-10th centuries BC.

Archaeological excavations at the site began in 1845, and many vital artifacts were discovered, with most being moved to museums in Iraq and abroad.

Historical artifacts from Nimrud can now be found in over 76 museums worldwide, including 36 in the United States and 13 in the United Kingdom.

In 2015, the terrorist organization, the Islāmic State of Iraq and the Levant (ISIL), destroyed much of the site. The excavated remains were damaged because of its Assyrian history.

The rise and fall of the Assyrian Empire