This Lion Hunting Scene from about 750 BC was created in the Kingdom of Sam’ al, which was in the southern and eastern regions of modern-day Turkey.

The proportions and details of the people and equipment, the wagon arming, the horse armor, the drawstring, the internal drawing of the lion, and the perspective do not match the quality of sculpture relief from the imperial cities.

The composition focuses on the strength of the lion who’s size dominates the perspective. Framed by the Syrian braided ribbon and filled with floral motifs, the picture shows the princely lion hunt.

It highlights the dangers and the success of personal courage and divine protection, which the winged sun disc represents. The name of the prince, standing behind the charioteer with bow and arrow, is not known.

This Orthostat relief was found in Sakçegözü, a village in modern-day Turkey. In ancient times it was influenced by the Sam’ al Kingdom.

Artworks have survived to show Pharaoh Amenhotep III killing more than 100 lions in a single hunt. In ancient Assyria, lion hunting was a ritualized activity reserved for kings.

These hunts were symbolic of the monarch’s duty to protect and fight for his people.

The Lion Hunt of Ashurbanipal, a sequence of Assyrian palace reliefs from the North Palace at Nineveh dating from about 645 BC, shows King Ashurbanipal hunting lions.

The Assyria “royal lion hunt,” was the staged and ritualized killing by the king of lions already captured and released into an arena.

The realism of the lions has always been praised, although the pathos modern viewers tend to feel was perhaps not part of the Assyrian response.

The Assyrian kings hunted lions for political and religious purposes, to demonstrate their power. The king would kill the lion from a chariot with his bow and arrow or spear.

Meanwhile, spearmen and archers would always protect the king from the lion. 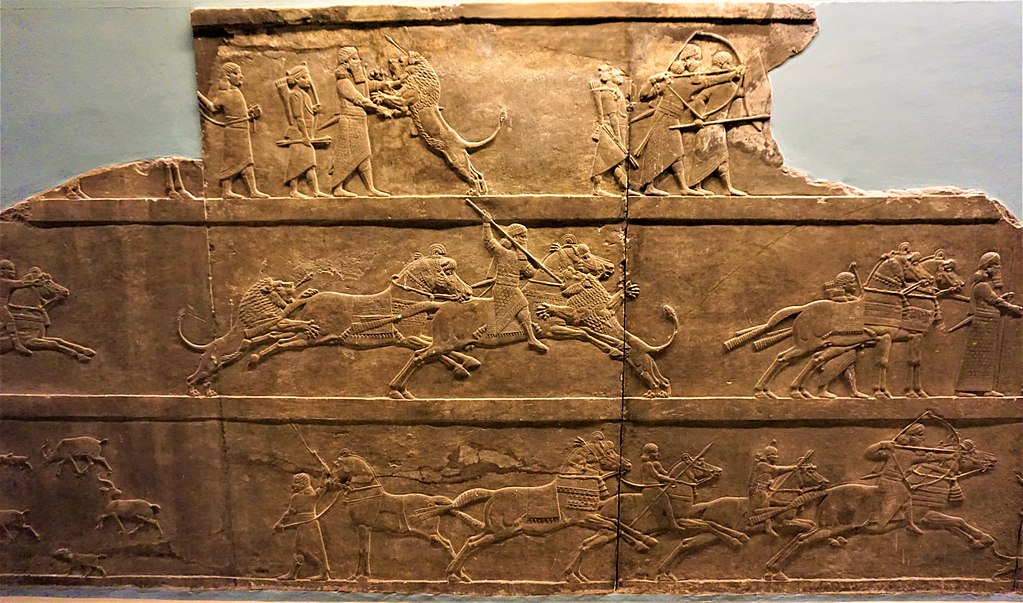 Lion hunting is evident in Greek mythology and art. Lions were present in the Greek peninsula until classical times.

The prestige of lion hunting is demonstrated in Heracles’ first labor, the killing of the Nemean lion.

Lions were depicted as prominent symbols of royalty, as in the Lion Gate to the citadel of Mycenae.

Today lion hunting is a subject of controversy as currently, the lion is listed as a vulnerable species, and some subspecies are listed as endangered.

Sam’ al flourished in the Iron Age, initially under Neo-Hittites, and by the 920 BC,  had become a kingdom.

In 717 BC, Assyria occupied the country under the rule of Sargon II.

An orthostat is a large stone with a more or less slab-like shape that has been artificially set upright.

Later, orthostats were carved with decoration in relief, a common feature of Hittite architecture and Assyrian sculpture, among other styles.

In the latter case, orthostats are large thin slabs of gypsum neatly and carefully formed.

They were intended for use as a wall-facing secured by metal fixings and carrying reliefs, which were then painted.