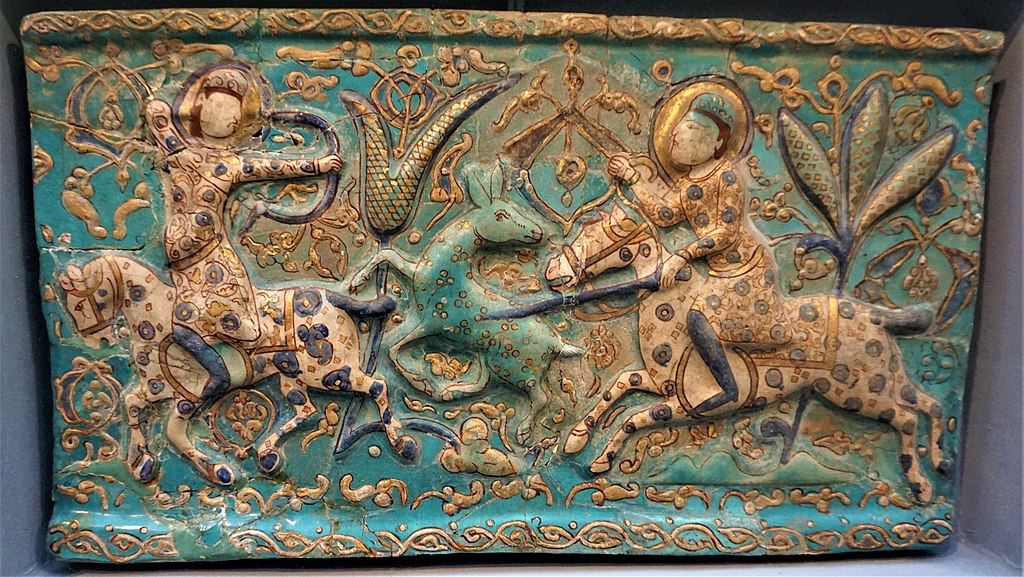 This rectangular quartz frit tile is from Iran and was created in the 13th – 14th Century. The relief shows a hunting scene, and between the two galloping riders is a deer. The riders have a golden halo surrounding their heads.

The hunter on the right holds the reins in his right hand and a sword in his left. The rider on the left is turning his body backward. He holds the bow and arrow in his hands and aims at the deer.

Different types of flowers and leaves surround the riders. Along the upper and lower edge runs a narrow border, which is decorated with repetitive floral motifs. This tile was part of a frieze that adorned the interior walls and is made of quartz frit.

Fritware refers to a type of pottery first developed in the Near East, a technique for “fritware” dating to c. 1300 AD, written by Abu’l Qasim, reports that quartz’s ratio to “frit-glass” to white clay is 10:1:1.

This type of pottery has also been referred to as “stone paste” and “faience” among other names.

Iznik pottery was produced in Ottoman Turkey as early as the 15th century AD. It consists of a body, slip, and glaze, where the body and glaze are “quartz-frit.”

Microscopic analysis reveals that the material that has been labeled “frit” is “interstitial glass,” which serves to connect the quartz particles. Frit was also a significant component in some early European porcelains.

A halo is a crown of light rays, circle or disk of light surrounding a person in the various arts. It has been used in many religions’ iconography to indicate sacred figures and has at different periods also been used in images of rulers or heroes.

In the sacred art of Ancient Greece, Rome, Hinduism, Buddhism, Islam, Christianity, and other religions, holy persons may be depicted with a halo in the form of a circular glow, or flames.

In Asian art, a halo may be depicted around the head or the whole body. If around the entire body, it is called a mandorla.

A Tour of the Pergamon Museum

“A broken hand works, but not a broken heart.”
– Iran Proverb