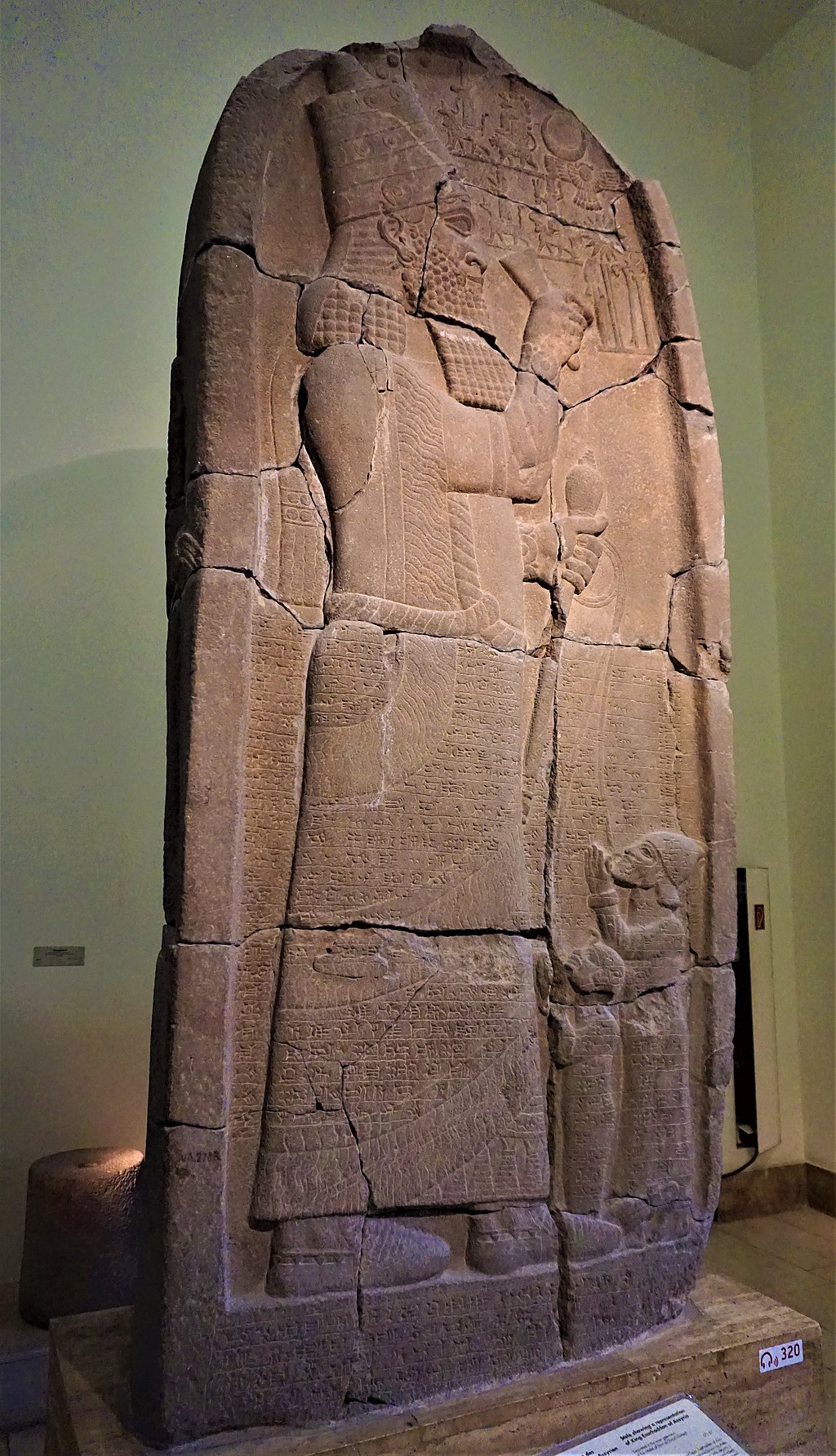 The second battle of 671 BC saw Taharqa retreat with his army to Memphis. Memphis was taken by Esarhaddon, forcing Taharqa to flee to Kush. After his victory, Esarhaddon “slaughtered the villagers and erected piles of their heads.”

Esarhaddon then called himself “King of Egypt, Patros, and Kush,” and returned home with rich booty from the cities of the delta. Esarhaddon wrote:

“His queen, his harem,
[Prince] Ushankhuru his heir,
and the rest of his sons and daughters,
his property and his goods,
his horses, his cattle, his sheep in countless numbers,
I carried off to Assyria.
The root of Kush I tore up out of Egypt.”

The stele shows Esarhaddon standing on the left in a traditional pose. He is holding a mace club in his left hand, together with a rope with a ring that passes through the lips of the conquered king kneeling before him.

The identity of the unnamed supplicant before him is not certain, and the kneeling figure is prince Ushankhuru with a rope tied around his neck.

Esarhaddon’s right hand is addressing the gods. Akkadian Cuneiform script covers the bottom half of the bas relief scene.

The Victory Stele of Esarhaddon was discovered in 1888 in Zincirli Höyük (Sam’al).

Esarhaddon was a king of the Neo-Assyrian Empire who reigned between 681 – 669 BC. His rise to power was not easy; neither were court intrigues at Nineveh.

Despite being the youngest son, Esarhaddon was named a successor by his father, and immediately his elder brothers tried to discredit him. Esarhaddon was forced into exile beyond the Euphrates, somewhere in what is now southeastern Turkey.

The biblical account is that Esarhaddon’s brothers killed their father after the failed attempt to capture Jerusalem (2 Kings 19:37).

Esarhaddon then returned to the capital of Nineveh and defeated his rival brothers in a civil war. He was formally declared king in 681 BC.

Esarhaddon’s reign was full of rebellions and battles which enabled him to acquire many titles during his reign which included:

Almost as soon as Esarhaddon left Egypt after his 671 BC victory, Egypt rebelled against the Assyrian rule.

Thus in 669 BC, Esarhaddon set off for Egypt to attempt to restore order in the Nile Valley but suddenly died during the same year.

Esarhaddon was succeeded by his sons Ashurbanipal as king of Assyria, and Shamash-Shum-ukin as king of Babylonia.

Who was Esarhaddon? The Life of an Ancient Assyrian King

A Tour of Mesopotamian Art