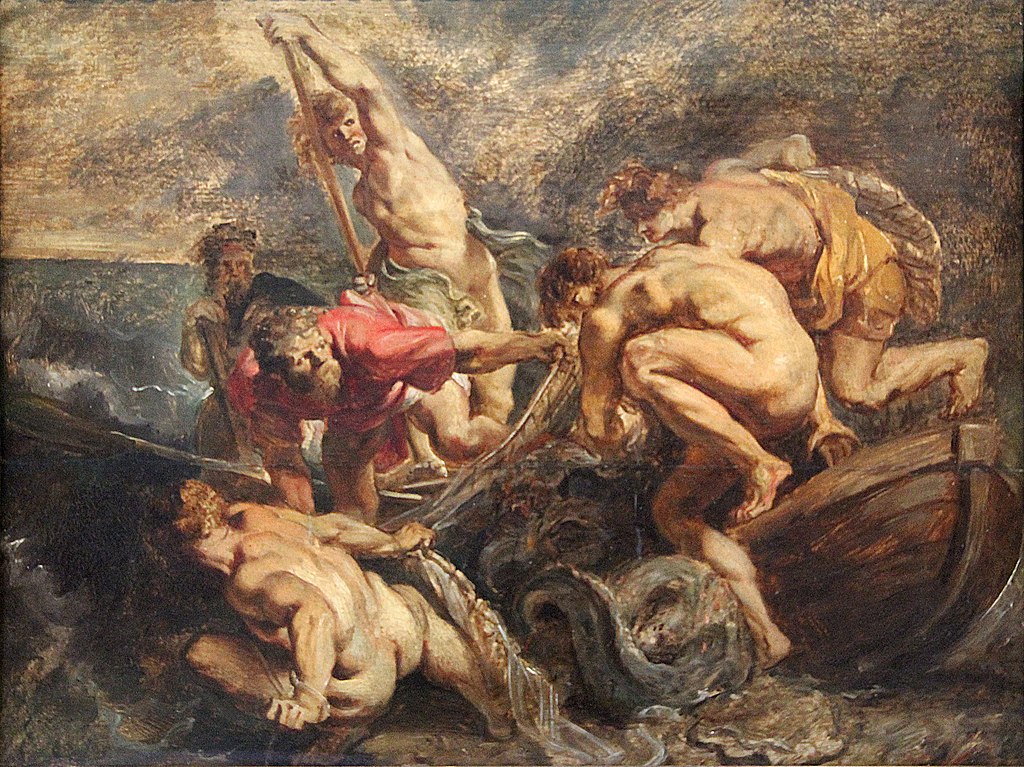 The “Miraculous Catch of Fish” by Peter Paul Rubens depicts one of the two miracles attributed to Jesus in the gospels. In both miracles, apostles are fishing unsuccessfully in the Sea of Galilee when Jesus tells them to try one more cast of the net, at which they are rewarded with a significant catch.

In the Gospel of Luke, the first miraculous catch of fish takes place during the early ministry of Jesus and results in Peter, James, and John joining Jesus as disciples.

The second miraculous catch of fish is reported in the last chapter of the Gospel of John and takes place after the Resurrection of Jesus.

In Christian art, the two miracles are distinguished by the fact that in the first miracle, Jesus is shown sitting in the boat with Peter, while in the second miracle, he is standing on the shore.

In this 1610, oil on oak, study of the miracle, by Rubens, it is not clear which of the wonders is depicted.

Rubens is one of the best-known painters of the seventeenth century, and he has created a heroic work of art that echos the figures of Michelangelo’s Sistine Chapel Ceiling.

The lake is fed partly by underground springs, although its primary source is the Jordan River, which flows through it from north to south. The Sea of Galilee is situated in northeast Israel, between the Golan Heights and the Galilee region.

In the New Testament, much of the ministry of Jesus occurs on the shores of the Sea of Galilee. In those days, there was a continuous development of settlements and villages around the lake.

There was also plenty of trade and ferrying by boat. The Gospels of Mark, Matthew, and Luke describe how Jesus recruited four of his apostles from the shores of the lake.

The fishermen that joined him were Simon and his brother Andrew also the brothers’ John and James. One of Jesus’ famous teaching episodes, the Sermon on the Mount, is supposed to have been given on a hill overlooking the lake.

Many of his miracles are also said to have occurred here, including his walking on water, calming the storm, the disciples and the miraculous catch of fish, and his feeding five thousand people.

In John’s Gospel, the sea provides the setting for Jesus’ third post-resurrection appearance to his disciples.

After the 135 CE, Bar Kokhba’s revolt was put down, the Romans banning all Jews from Jerusalem. Thus the center of Jewish culture and learning shifted to the region of Galilee. It was in this region that the Jerusalem Talmud was compiled.

In 1986 an Ancient Galilee Boat, also known as the Jesus Boat, was discovered on the north-west shore of the Sea of Galilee during a drought when water levels receded.

Peter Paul Rubens was a Flemish artist who is considered the most influential artist of the Flemish Baroque tradition. Rubens specialized in making altarpieces, portraits, landscapes, and history paintings of mythological and allegorical subjects.

His compositions referenced classical and Christian history and emphasized movement, color, and sensuality.

Ancient Galilee boat at Kibbutz GinossarRubens often made engravings following the completion of his works. These copies were even collected, and other artists used these engravings as the basis of their works.

The etchings and prints helped to increase the popularity of Rubens’ works during his lifetime.

The genius of Rubens

“As on the Sea of Galilee, The Christ is whispering “Peace.”
– John Greenleaf Whittier