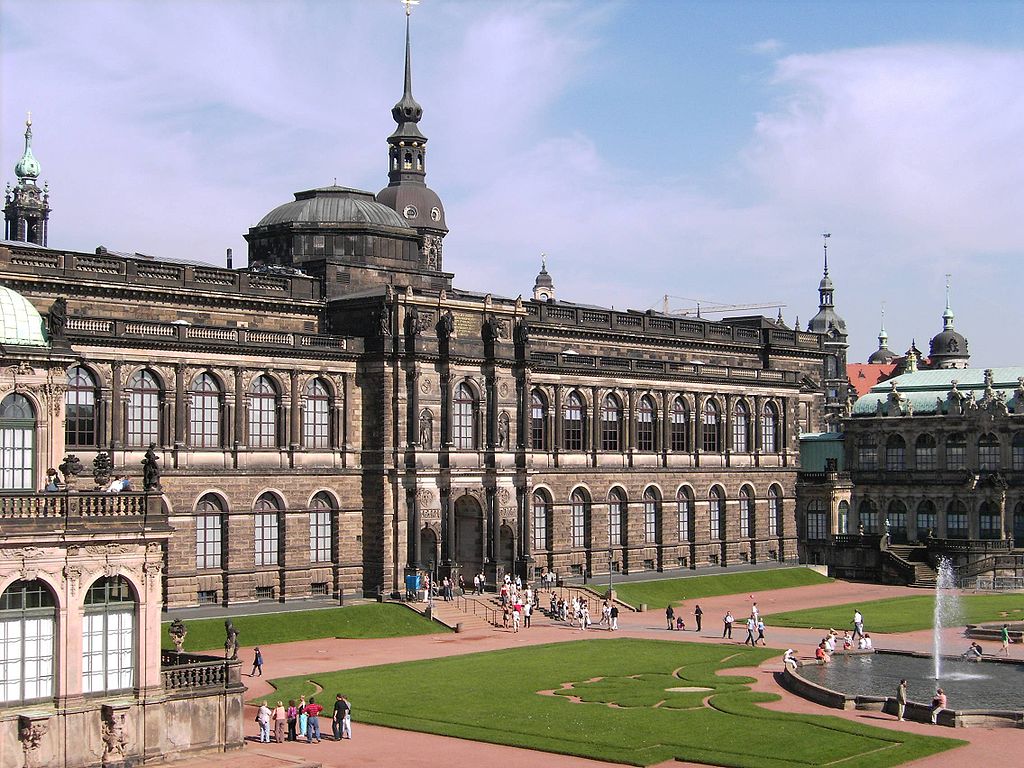 The Gemäldegalerie Alte Meister ( Old Masters Gallery) in Dresden, Germany, has a collection of over 1,500 paintings from the 15th to the 18th centuries.

It includes major Italian Renaissance works as well as Dutch and Flemish paintings. Outstanding works by German, French, and Spanish painters of the period are also among the gallery’s attractions.

The collection is located in the Semper Gallery, the gallery wing of the Zwinger.

Renaissance and Baroque masterpieces by Italian painters such as Raphael, Titian, Giorgione, Correggio, Tintoretto, and Guercino are displayed.

The collection contains a large number of 17th-century Flemish and Dutch paintings by Rubens, Rembrandt, Jordaens, Van Dyck, and Vermeer. Outstanding works by German, French, and Spanish painters are also among the gallery’s attractions.

Paintings from the 19th century onwards are displayed in the New Masters Gallery (Gemäldegalerie Neue Meister) in the Albertinum.

A tasseled ochre drapery in the foreground right, partially closed, covers part of the room in which she stands. Highlighted by the light from the window are the fruit in a tilted bowl, the luxurious carpet, and the peach, which is cut into half.

While the tray is reminiscent of Japanese lacquerware, the cup is in the Chinese porcelain style. The picture is almost devoid of shadows, with a pale background, the light being furnished by windows reflected in the water glass. T

his masterpiece is painted in half-tones and perfect modeling using pastels on parchment. The young maid’s eyes are downcast, waiting patiently for a signal to advance.

The girl’s headdress is representative of the colorful regional caps in Europe. A white shawl covers her shoulders, and a pleated linen apron tied around her waist reaches down over a long blue-grey satin skirt, whose folds glisten.

“The Prodigal Son in the Brothel” by Rembrandt

“The Prodigal Son in the Brothel” by Rembrandt depicts the extravagance of the prodigal son, as told in the Biblical parable.

The son has asked his father for his inheritance, and this painting shows him squandering his fortune. In the Protestant contemporary Dutch world, the theme of the prodigal son was a popular subject for works of art due to its moral tale.

The people in the painting have been identified as Rembrandt himself and his wife, Saskia.

“Painter in his Studio” by Gerrit Dou depicts either Rembrandt, who was Dou’s teacher, or it is a self-portrait.

The artist is presented as a learned and well-educated painter who has surrounded himself with attributes of the science and arts.

Gerrit Dou was the founder and head of the group of “Leiden Fine Painters.” The Fijnschilders (literally “fine-painters”), were Dutch Golden Age painters, from about 1630 to 1710.

“The Painter in his Studio” by Adriaen van Ostade depicts a painter sitting with his back to the viewer, in a dilapidated studio. The painter seated in a low chair while working at an easel, supporting his brush-holding hand with a maulstick.

In the background, a young apprentice is assisting him by grinding and mixing colors on the table at the far wall.

The studio is full of references to his education and intellectual interests, including prints, a plaster cast, a wooden model, props, animal skulls, and books.

“Sistine Madonna” by Raphael depicts the Madonna, holding the Christ Child and flanked by Saint Sixtus and Saint Barbara. The group stands on clouds before dozens of obscured putti, while two distinctive winged putti rest on their elbows at the bottom of the composition.

The winged angels beneath Mary at the very bottom of the picture are famous in their own right. Their image has been highly marketed and has been used in postcards, wrapping paper, and many consumer items.

The angels of this type are known as putti and are commonly conflated with and erroneously referred to as cherubim. The image of these putti has inspired legends of their own.

According to legend, when Raphael was painting the Madonna, the children of his model would come in to watch. Struck by watching the children’s posture and faces, he added them to the painting as he watched them.

Another story claims that Raphael was inspired by the children he encountered on the street when he saw them looking wistfully into a baker’s shop window.

“The Procuress” by Johannes Vermeer

The man to the side wearing a black beret and a doublet with slashed sleeves is probably a self-portrait of Vermeer. In the painting, Vermeer’s character is as a musician, in the employ of the madam, he carries a cittern as his musical instrument.

“The Tribute Money” by Titian

“The Tribute Money” by Titian depicts the Pharisee, who asks Christ whether it is right to pay tax to the Romans, who rule Palestine. Christ, sensing a trap, asks whose likeness and name are on the coinage: “They say unto him, Caesar’s.”