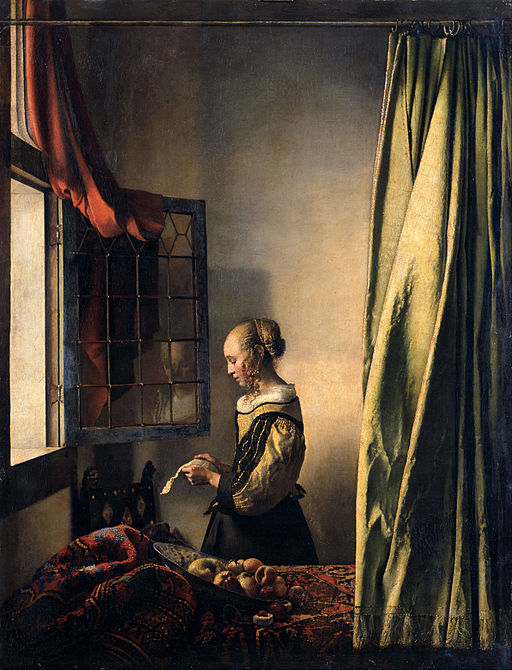 A tasseled ochre drapery in the foreground right, partially closed, covers part of the room in which she stands. Highlighted by the light from the window are the fruit in a tilted bowl, the luxurious carpet, and the peach, which is cut into half.

Scientific test and x-rays of the canvas showed that at one point, Vermeer had featured a naked Cupid on the wall in this painting.

For whatever reason, somebody in the 18th century painted over the cupid image with the empty blank wall featured in this image of the painting.

The museum has restored Vermeer’s original and removed the overpainted layer, which can be seen in the above image. Today, the original Cupid can now be seen in this painting at the museum.

Vermeer had depicted a standing Cupid holding a raised bow with his right hand and lifting his left arm. The painting can now again be seen as it left the artist’s studio.

Art historians suggest that the fruit in a tilted bowl and the peach, which is cut in half, revealing its pit, symbolize an extramarital relationship and that the letter is a love letter.

Now that the cupid image has been revealed, is this theory confirmed? Or is she sad because the relationship has ended?

Art as a Casualty of War

“Girl Reading a Letter at an Open Window” was among the paintings rescued from destruction during the bombing of Dresden in World War II.

When World War II was imminent in 1938, the museum was closed, and the painting was stored, with other works of art, in an underground tunnel in Saxony.

Discovered by the Red Army in 1945, they were taken to Russia. After the death of Joseph Stalin, the Soviets in 1955 returned the surviving art to Germany.

Most of the essential paintings from the Old Masters Gallery survived this period, but the losses were significant. Over 200 pictures had been destroyed, and some 450 are still missing today.

There are only thirty-four paintings by Vermeer that have survived and have been authenticated. Vermeer painted mostly domestic interior scenes, and most of his pictures are set in the rooms of his house in Delft.

There have similar furniture and decorations in various arrangements in his domestic scenes. His art also often portrays the same people.

Girl Reading a Letter at an Open Window

How Vermeer Lied to Us

“A great poet is the most precious jewel of a nation.”
– Ludwig van Beethoven